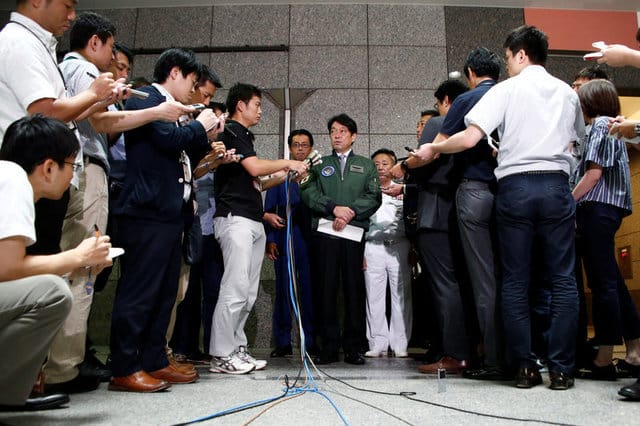 North Korea fired several short-range missiles into the sea off its east coast early on Saturday, South Korea and the U.S. military said, as the two allies conducted annual joint military drills that the North denounces as preparation for war.

The U.S. military’s Pacific Command said it had detected three short-range ballistic missiles, fired over a 20 minute period. All of the missiles failed, with one blowing up almost immediately after launch, while two others failed in flight, it added.

The South Korean Office of the Joint Chiefs of Staff said the projectiles were launched from the North’s eastern Kangwon province and flew in a northeasterly direction about 250 km (155 miles) into the sea.

Later on Saturday, the South Korean Presidential Blue House said the North may have fired an upgraded 300-mm calibre multiple rocket launcher but the military was still analyzing the precise details of the projectiles.

Pacific Command said the missiles did not pose a threat to the U.S. mainland or to the Pacific territory of Guam, which North Korea had threatened earlier this month to surround in a “sea of fire”.

Tensions had eased somewhat since a harsh exchange of words between Pyongyang and Washington after U.S. President Donald Trump had warned North Korean leader Kim Jong Un he would face “fire and fury” if he threatened the United States.

North Korea’s last missile test on July 28 was for an intercontinental ballistic missile designed to fly 10,000 km (6,200 miles). That would put parts of the U.S. mainland within reach and prompted heated exchanges that raised fears of a new conflict on the peninsula.

Japan’s Chief Cabinet Secretary Yoshihide Suga said the missiles did not reach its territory or exclusive economic zone and did not pose a threat to Japan’s safety.

The South Korean and U.S. militaries are in the midst of the annual Ulchi Freedom Guardian drills, which the North routinely describes as preparation for invasion, that involve computer simulations of a war to test readiness and run until Aug. 31.

The region where the missiles were launched, Kittaeryong, is a known military test site frequently used by the North for short-range missile drills, said Kim Dong-yub, a military expert at the Institute for Far Eastern Studies in Seoul.

“So rather than a newly developed missile, it looks to be short range missiles they fired as part of their summer exercise and also in response to the Ulchi Freedom Guardian drill,” he said.

The United States and South Korea are technically still at war with the North because their 1950-53 conflict ended in a truce, not a peace treaty. The North routinely says it will never give up its weapons programmes, saying they are necessary to counter perceived U.S. hostility.

Washington has repeatedly urged China, North Korea’s main ally and trading partner, to do more to rein in Pyongyang.

The White House said Trump had been briefed about the latest missiles but did not immediately have further comment.

The U.S. State Department did not immediately comment about the Saturday launches. Secretary of State Rex Tillerson earlier this week credited the North with showing restraint by not launching a missile since the July ICBM test.

Tillerson had said he hoped that the lack of missiles launches or other “provocative acts” by Pyongyang could mean a path could be opening for dialogue “sometime in the near future.”

Trump also expressed optimism earlier this week about a possible improvement in relations. “I respect the fact that he is starting to respect us,” Trump said of Kim.

North Korea’s state media reported on Saturday that Kim had guided a contest of amphibious landing and aerial strike by its army against targets modelled after South Korean islands near the sea border on the west coast.

In a report that lacked the North’s usual belligerent threat against the United States, its official KCNA news agency quoted Kim as telling its Army that it “should think of mercilessly wiping out the enemy with arms only and occupying Seoul at one go and the southern half of Korea.”

A new poster on a North Korean propaganda website on Saturday showed a missile dealing “a retaliatory strike of justice” against the U.S. mainland, threatening to “wipe out the United States, the source of evil, without a trace.”

On Wednesday, Kim ordered the production of more rocket engines and missile warheads during a visit to a chemical institute of the Academy of Defence Science, an agency that he fostered to develop its ballistic missile programme.

Diagrams and what appeared to be missile parts shown in photographs published in the North’s state media suggested Pyongyang was pressing ahead with building a longer-range ballistic missile that could potentially reach any part of the U.S. mainland including Washington.

It is also believed to be developing a new solid-fuel missile of a class that it has previously tested in submarine launches.

Man United aim for hat-trick of wins to start season