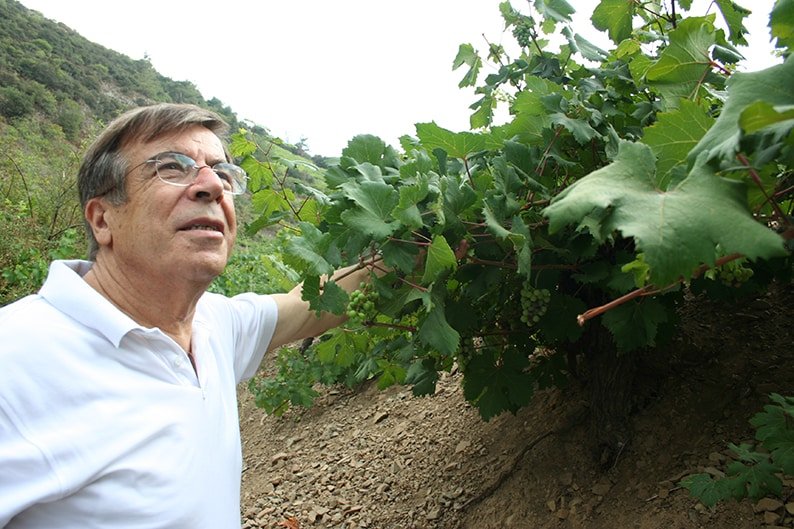 Daniel amongst the vines he has resurrected

“Anastisei means to resurrect, just like my name,” jokes Daniel Anastasis taking another dangerous turn on a narrow dirt strip winding through ancient vineyards that cover the slopes of the Machairas mountains which enfold Farmakas, his family village.

“This is what I do with these vineyards – I resurrect them.”

He stops his car, gets out and points to the green covered mountain flanks spread in front of us.

“These are all vineyards that we have saved within the last couple of years,” he says. “I will take you the oldest ones. They are 130-140 years old. You will love it.”

We press on, a rise-and-fall progress, at times climbing well above 1,000 metres. Of the many roads here, all, sooner or later, seem to lead to grape vine plantations. Some are well looked after – neat, cultivated, in pristine condition. Others, sadly, tell a different story, and appear to be barely surviving, weed-filled and in a state of neglect.

Anastasis seems to know all of them like the inside of his own pocket. He points out those his team has been taking care of, as well as those they will be tending next winter. He also indicates those that are still in the care of owners who toil on them day in day out. Then there are the lots that nobody works on any more.

“Nothing upsets me more nowadays than seeing an old vineyard dying,” he admits, quickly adding: “But I know I cannot save all of them. One man cannot save the whole world. I can just do a little bit.”

He stops again to show me the gold and green leaves of small, endemic golden oaks that grow in abundance in the area around and above Farmakas.

“These trees are very important for our vines…,” he says. “Because in nature they are all interconnected – they help each other, they add to the quality of our grapes. This and the climate, the soil, the water, the age of our vines – it is all linked together.”

Anastasis, born in Farmakas in 1945, left it as a teenager with his mother and three other siblings to join their father who had emigrated to Australia in search of work in 1950. The reunited family settled in Sydney.
Several years later, Anastasis was himself to move on, when he and his new bride set off from Sydney to South Africa. There, from modest beginnings building on the sturdy foundations of hard work, he developed a network of highly successful businesses that included bakeries, a hotel plus restaurant and casino and a string of other retail outlets.
He returned to Cyprus and his birth place a mere seven years ago and determined to do something for his ancestral community quickly put his entrepreneurial skills to work.

By then in his late 60s, retirement was the last thing on Anastasis’ mind. His restless energy and resourcefulness drove him forward. Soon he had bought Farmakas Water, the famous local water factory. “The water is very good. It comes from 1,700 feet below the ground, a natural spring. Thanks to the mountain vines, it has very special characteristics,” he says.

It wasn’t long before he turned his attention to the possibilities represented by the vines. Childhood memories of how his grandfather, who used to take his home-made wines and zivania in goatskin bags by donkey the 40 kilometres to Nicosia, got him to thinking that it might be even more interesting to do some wine making of his own.

Not a man who is afraid to take the initiative, Anastasis quickly turned thought to action.

“At first it was supposed to be just a kind of hobby but it quickly became much more than this. We planted some vines, bought equipment, started buying grapes from the local farmers and then realised that to make good wine we needed grapes of certain quality.

“That was when I invited all the local vineyard owners to discuss what I was doing and planning and what I needed from them. By the end of that initial meeting, some of the owners approached me with an offer – they were prepared to let me make use of their vineyards for free.”

“For free,” this reporter asks herself, wrestling with the concept. Who ever heard of anything coming free in this world!

My obvious scepticism makes no impression on Anastasis. He insists that, yes, this is exactly what happened. He proceeds to explain.

“Fewer and fewer people in Farmakas and other neighbouring villages are willing (and/or capable because of advancing years) to sustain the hard back-breaking work needed to maintain the local vineyards in good shape.

“A lot of young people have left the village and the old ones often cannot do it anymore. I know some people in their 80s who still work very hard and their vineyards are among the best but, sadly, how much longer will they be able to keep it up?”

He is realistic about this increasingly obvious fact of life as the demographics of Cypriot rural life shift and the young move (and stay) away.

“Nowadays, I am taking care of about 50 per cent of the local plantations. I have a lease on them for next 15 years on condition that I keep them alive and productive. This gives their owners some peace of mind. They are happy because they know that these vineyards that were planted by their grandfathers are still going strong, even though they themselves no longer can work them themselves.”

The vineyards Anastasis mantains produce two local grape varieties – red Mavro and white Xynisteri – both indigenous to the island. Many of the vineyards are more than 100 years old, thus making them among the oldest in Cyprus.

“Their age is what makes them so special. They give you a much more mature grape. So the juice is also more mature and this enhances the wine,” says Anastasis.

Add to this the high attitude of the rocky mountain growing area. “Here in Farmakas we have possibly the highest vineyards in Europe. And the way we prune the vines, focusing on quality rather than quantity. All of these contribute.”

Anastasis employs a half-dozen permanent staff who work in the vineyards. He also relies on the advice of a number of visiting experts who assess his vineyards several times a year way and experienced master of wine Alexis Machuca.

That said, he claims his best “university” is the local coffee shop where the elderly farmers meet and exchange stories.

“Local farmers know everything about these vineyards. I used to go there quite a lot when I first started,” he says.

“But now more and more the roles have been changing. People see our results and come for advice to me.”

Anastasis’ winery Santa Irine produces seven types of wine: three red, a rose and three white, including the only locally produced blanc du noir, the white wine produced from black grapes. Within the last year, his wines have won numerous medals at wine competitions in Vienna, Thessaloniki and London. His range can be bought either at the vinery or select wine shops.

As if he weren’t busy enough, Anastasis also runs a restaurant in Farmakas called Ierambelos that features fusion cuisine based on local ingredients, and an eco tourism agency Farmakas Living.

Asked if he plans some more ventures, he grins and says his wife Theoni has told him to let up and stop.

“I think we have done enough. I wanted to develop various types of wines from local grapes and I have succeeded. I still play with some more wines. For example, I’m now planning to start making semi-sweet and sparkling wines and we also want to start making zivania. Otherwise, yes, I am stopping now.”

A layman’s guide to the Treaty of Guarantee

Tales from the Coffeeshop: Uppity unions return to form