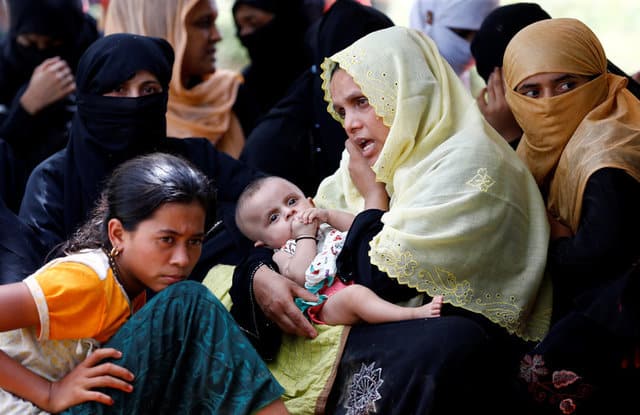 A Rohingya refugee woman with a child talks over phone as she takes shelter in No Man’s Land between Bangladesh-Myanmar border, in Cox’s Bazar

Thousands of fearful Rohingya Muslim and Rakhine Buddhist civilians fled the worst fighting to grip Myanmar’s north-west in five years, with 104 people killed and the United Nations and international aid groups forced to pull out some staff.

The mass escape from the northern part of Rakhine state was triggered by widespread coordinated offensives by Rohingya insurgents wielding sticks, knives and homemade bombs in attacks on Friday on 30 police posts and an army base.

The violence marks a dramatic escalation of a conflict that has simmered in the region since last October, when a similar but much smaller Rohingya attack prompted a brutal military response dogged by allegations of human rights abuses.

The treatment of about 1.1 million Muslim Rohingya in mainly Buddhist Myanmar has emerged as the biggest challenge for national leader Aung San Suu Kyi, who has condemned the attacks and commended the security forces.

The Nobel peace laureate has been accused by some Western critics of not speaking out for the long-persecuted Muslim minority, and of defending the army’s counter-offensive after the October attacks.

Thousands of Rohingya – mostly women and children – fleeing the violence sought to ford the Naf river separating Myanmar and Bangladesh and cross the land border.

Some of the refugees who had escaped previous pogroms in Myanmar said Bangladeshi police had warned them not to help the new arrivals.

“They told us, ‘If anyone gives them shelter, we will arrest you and send you to the other side. So, out of fear, we are not allowing any newcomers,” Mohammad Yunus, a Rohingya Muslim, said in a makeshift refugee camp near the border.

Despite these measures, about 2,000 people have been able to cross into Bangladesh since Friday, according to estimates by Rohingya refugees living in the makeshift camps in Bangladesh.

At the no-man’s land between the two countries, Reuters reporters saw dozens of Rohingya women, most wearing the all-enveloping burqa, seated in a cramped area under a few black plastic sheets shielding them from the harsh sun.

Gunfire rang out on the Myanmar side of the border on Saturday and Sunday.

For years, the Rohingya have endured apartheid-like conditions in northwestern Myanmar, where they are denied citizenship and face severe travel restrictions. Many Myanmar Buddhists regard them as illegal immigrants from Bangladesh.

In Myanmar, the UN and international aid agencies withdrew some staff from the area, after the government said it was investigating whether members of aid groups had been involved in an alleged siege by the insurgents of a village in August.

The state has provided security to aid workers, but “with this kind of situation, no one can fully guarantee safety,” said Nyi Pu, chief minister of Rakhine state.

“If they want to stay, we will give security as best as we can. If they don’t want to stay, due to their safety concerns, and want to leave, we told them that we will help them,” he added.

The government reported at least 104 deaths, the vast majority militants, plus 12 members of security forces and several civilians.

The government urged Rohingya civilians to cooperate with security forces, assuring those with without ties to the insurgents they would not be affected.

It has declared the Arakan Rohingya Salvation Army (Arsa), which instigated the October attacks and claimed responsibility for the latest offensive, a terrorist organisation.

The government’s allegations were baseless, the group said In a statement on Monday, seeking to present its cause as a defence of Rohingya rights.

North Rakhine state is populated mostly by Rohingya Muslims. Thousands of non-Muslim villagers were being evacuated to larger towns, monasteries and police stations, the government said. Many were arming themselves with knives and sticks for fear of insurgent attacks.

“We are afraid of swords because they attack people with swords,” said Than Aye, a 65-year-old villager fleeing the township of Buthidaung for Sittwe, the state capital.

“That’s why we are fleeing from there, as we are afraid of them. I haven’t slept well at night.”