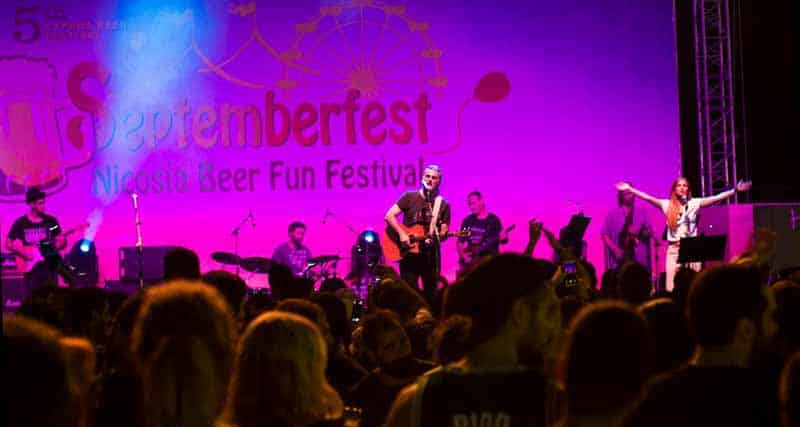 September is just around the corner, and that means that the Nicosia Septemberfest is just a few sleeps away. This year is the festival’s seventh instalment and it promises seven nights of live music, food stalls, plus 100 different types of beers from all over the world for us to choose from.

Each night has a different musical feel. The festival will kick off on Tuesday with performances that are dedicated to Nikos Xylouris. Greek singers Georgos Heretis, Sotos Konstantinou, Petros Kouloumis and the band Asamion Live will perform songs in tribute to the Greek composer and singer from Crete. In the 1970s, composers began to write music for lyrics penned by famous Greek poets, and Xylouris was one of the first singers to interpret these songs.

The second night of the festival has a rock and Greek-music feel with the stage being taken over by singers Filippos Pliatsikas and Dionysis Tsaknis, together with the local band Elopia who will reunite on stage 20 years after they split.

Pliatsikas was the main composer, lyricist and lead singer for the rock group Pyx Lax. When the band split, he began his solo career, which is still going very strong. As a composer, lyricist and singer, Tsaknis has released a total of 27 albums and singles since 1982. He has also written music for a number of theatrical performances, TV series and films, and has also penned a book and written articles for a Greek newspaper.

The last day of August will have a more traditional Greek feel when singers Dimitris Basis, Koulis Theodorou, Filippos Ktenas and Michalis Leventis will help us say goodbye to summer once more.

This concert is dedicated to the 20 years since Basis began his musical career. He started chanting in church at the age of nine and three years later he started studying Byzantine music. His first album came out in 1997, and his songs and voice just keep getting better.

September will begin with rock when Stelios Rokkos, Katerina Lioliou and Stefan Triantafyllis take to the stage, together with a DJ set from Sfera 96.8. The highlight of the night will certainly be Rokkos, the Greek rock star who writes and orchestrates most of his songs. Apart from his rock persona, Rokkos is also well known for his romantic songs – so if love is in the stars for you this September, this could be the concert to help it all happen.

September 2 will have more of a pop feel when Yianis Vardis, George Lianos and Konstantinos Nazis will have their night at the beer festival. Vardis and Lianos have made performing together a regular event. Their own personal songs, together with performances of well-known popular Greek hits, are what keep the crowds coming back for more.

It will be all about the bands on September 3 when Ypogia Revmata, Magic De Spell, Prospectus and Fuse take to the stage. Each band has written its own page of rock history, and now they will join forces to show us exactly how rockers can turn a normal night into one that is electric.

The last night of the festival only has one act, and that act is Vassilis Karras. The singer who is known for his deep voice is celebrating 40 years since he picked up the microphone. So, with all that musical experience, his performance is bound to ensure that we have some great memories to take away with us until next September.

Septemberfest – Nicosia Beer Fun Festival 2017
A number of live musical performances, food and beer. August 29 until September 4. Academy’s National Forest Park, Larnacos Avenue, Aglantjia, Nicosia. 7pm-12am. €6 with a drink every day except September 4 which is €8 with a drink. Tel: 22-485420

A violin takes us around the world

(Slap)stick it to the man