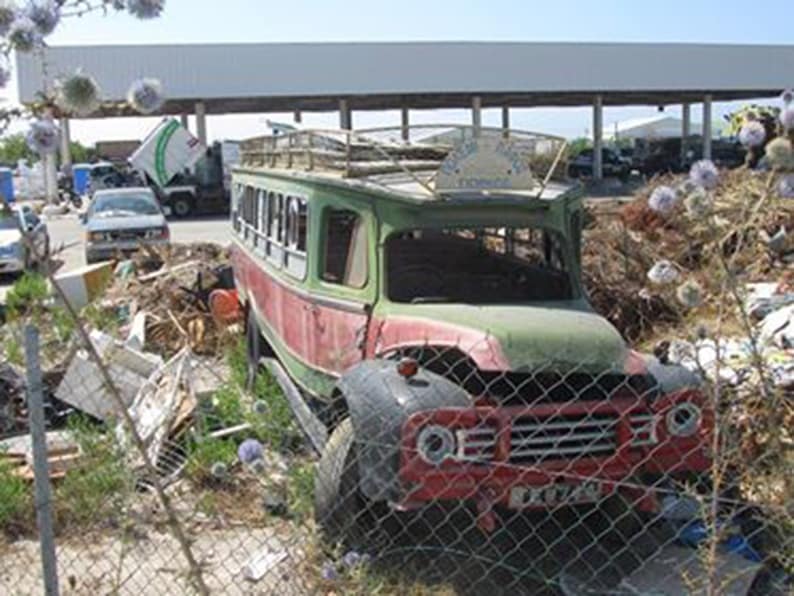 PAPHOS municipality on Monday denied it was dumping an iconic bus that had been used by fighters resisting Eoka B coupists in 1974, and in which four people were killed.

Locals and members of the Paphos Green party had publicly voiced concerns that the vehicle had been discovered at a rubbish tip in Geroskipou and was due to go for recycling, but a spokesman for Paphos municipality robustly refuted the allegation.

“This is simply not true, the bus is being stored at a municipality storage facility in Geroskipou and not anywhere near a rubbish dump,” he told the Cyprus Mail.

The confusion arose after the bus was moved from the Ahmet Rashid Park in central Paphos, where it had remained for years, whilst renovation of the space was underway.

“After discussions with the resistance association a few months ago, we informed them that the vehicle would be moved to our facility for a time whilst we discussed a permanent place in Paphos where the bus could go on display,” the spokesman said.

He added that the vehicle had been previously been in an open area of the facility, but was moved to a covered area a few days ago.

“It will be transferred to a new permanent location in the near future,” he said.

The bus is a symbol of the Paphos resistance against the coup and serves as a piece of history to the tragic events which unfolded, said Andreas Evlavis, secretary of the Paphos Green party. It was reported to the Green party offices that the bus had been dumped at the Geroskipou rubbish tip.

“Four people were killed in this bus and respect for this must be shown. You don’t throw away history,” he said.

He added that the bus should be on permanent public display in Paphos.

On the same day as the Greek junta and Eoka B inspired coup against Archbishop Makarios on July 15 1974, the vehicle from Polemi started its journey from Paphos to Limassol, full of resistance fighters loyal to Makarios. Close to Kolossi it was ambushed, and four resistance fighters were killed.

“They were on their way to protect Makarios in Nicosia, but members of Eoka B heard about this and stopped the bus, killing four of them,” he said. “The others managed to escape.”

The group were led by resistance fighter Mikis Tembriotis, who still lives in Paphos.

In June, the Paphos mayor, Phedonas Phedonos officially inaugurated the upgraded park, the result of a joint project between the municipality and betting giant Opap, in a residential area in the centre of Paphos. It consists of plots belonging to a Turkish Cypriot named Ahmet Rashid.

When the park was being renovated, the bus disappeared said Evlavis.

“This is not just an old bus, this is a symbol, it is part of the history of the town,” he said.

He added that particularly as Tembriotis is still alive, the bus should be preserved as a prominent symbol of Paphos.

The political romanticism of Cypriots