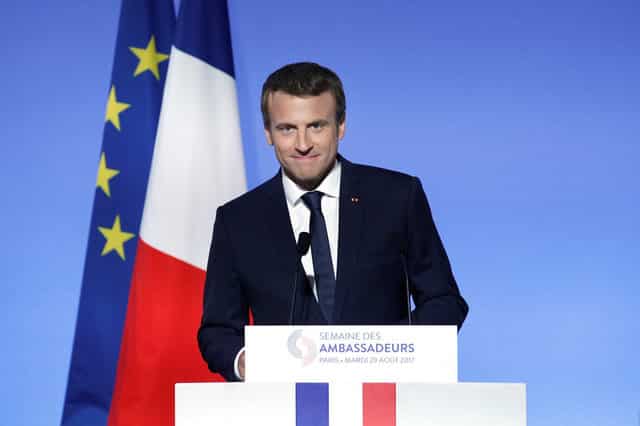 French President Emmanuel Macron said on Tuesday that ensuring national security would be at the heart of France’s diplomatic activity and he set eradicating “Islamist terrorism” as his core foreign policy goal.

Following a policy based largely on ideological interests, France has in recent years been quick to intervene militarily in conflicts such as those in Libya, Mali and Central African Republic.

In his first annual address to France’s 170 ambassadors, Macron confirmed an already noticeable shift – promising to focus on initiatives that could bring concrete results, such as brokering peace talks in Libya and leading efforts to address Europe’s migrants crisis.

“I want France to propose solutions and initiatives when there are new crises,” he said. “The fight against Islamist terrorism is the priority of France’s foreign policy. France’s security is the main purpose of our diplomacy.”

French interventions in Africa and the Middle East have exposed it to attack by Islamist militants.

Gunmen and suicide bombers killed 130 people in and around Paris in November 2015 and over 100 people have been killed in other Islamist attacks in France in the past two-and-a-half years.

Since taking office in May, Macron has sought to improve ties with Russia after difficulties between Moscow and Paris under the previous administration. He has also tried to keep alive a dialogue with US President Donald Trump, whose unorthodox leadership has riled some of his closest allies.

That has broadly aligned Macron’s foreign policy with the US priorities of tackling terrorism, while opening a window of dialogue with Russia on subjects such as Syria and Ukraine.

Macron said he wanted full transparency from Gulf Arab states on terrorism-financing networks. But he warned in a veiled message to Trump that taking sides amid the tensions between Sunni-led Saudi Arabia and its Shi’ite rival Iran could have devastating consequences for the region.

“We shoudn’t choose one side or another. Other great powers have,” Macron said.

He repeated his view that there was no alternative to the “good” 2015 deal struck between Iran and a group of world powers aimed at curbing the its nuclear programme which the United States was reviewing.

“In the context of what we are living through, the 2015 agreement is what allows us to establish a constructive and demanding dialogue with Iran,” he said.

Under Macron, diplomats say France’s focus appears likely to shift to intervention in areas where Washington sees little added value in doing so, such as Africa, and on climate change, on which Washington and Paris disagree.

Macron, who has some 4,000 troops spread across the West African Sahel region, said there would be a re-evaluation of troop needs in the coming weeks.

He would also continue to push peace efforts between Libya factions after bringing rival leaders to Paris in July, an area that was crucial to curbing the flow of thousands of refugees and economic migrants to Europe.

Macron also said he wanted France to play a greater role on resolving the Syria conflict.

Critics at home have said French policy on Syrian President Bashar al-Assad had in the past focused too much on calling for his eventual departure from power and backing his opponents leaving it ostracised in international talks.

“Daesh (Islamic State) is our enemy. Restoring peace and stabilising Iraq and Syria is or priority. We must win the peace and change method,” Macron said.

He said that a contact group proposed by France on Syria would meet at the United Nations in New York in September, although he gave no details on its participants or how it differed from previous contact groups.

Arrest after man suspected of posing as doctor