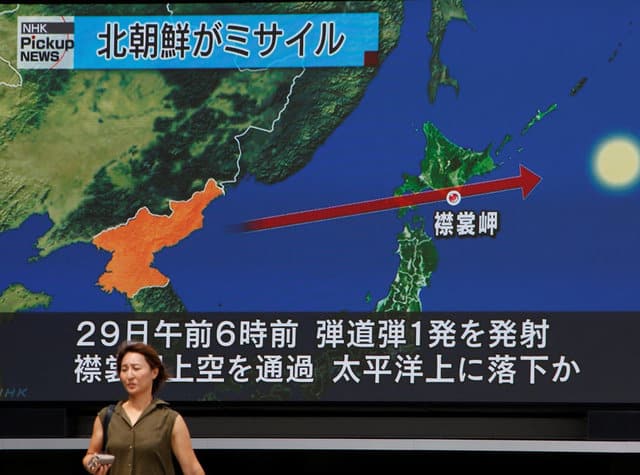 North Korea fired a ballistic missile over Japan’s northern Hokkaido island into the sea on Tuesday, prompting a warning from US President Donald Trump that “all options are on the table” as the United States considers its response.

The test, one of the most provocative ever from the reclusive state, came as US and South Korean forces conduct annual military exercises on the peninsula, angering North Korea which sees them as a preparation for invasion.

North Korea has conducted dozens of ballistic missile tests under young leader Kim Jong Un, the most recent on Saturday, in defiance of UN sanctions, but firing projectiles over mainland Japan is rare.

“This regime has signalled its contempt for its neighbours, for all members of the United Nations, and for minimum standards of acceptable international behaviour,” Trump said in a statement released by the White House.

“Threatening and destabilising actions only increase the North Korean regime’s isolation in the region and among all nations of the world. All options are on the table.”

Trump spoke with Japanese Prime Minister Shinzo Abe and the two agreed that North Korea “poses a grave and growing direct threat to the United States, Japan, and the Republic of Korea, as well as to countries around the world”, the White House said.

The Republic of Korea is South Korea’s official name.

“President Trump and Prime Minister Abe committed to increasing pressure on North Korea, and doing their utmost to convince the international community to do the same,” the statement said.

The US disarmament ambassador said Washington still needed to do “further analysis” of the launch, which would be the subject of a UN Security Council meeting later in the day.

“It’s another provocation by North Korea, they just seem to continue to happen,” US envoy Robert Wood told reporters in Geneva.

“This is a big concern of course to my government and to a number of other governments,” Wood said before a session of the UN-sponsored Conference on Disarmament.

In China, North Korea’s lone major ally, foreign ministry spokeswoman Hua Chunying said the crisis was “approaching a critical juncture”, but it was also maybe a turning point to open the door to peace talks.

South Korea and the United States had discussed deploying additional “strategic assets” on the Korean peninsula, the presidential Blue House said in a statement, without giving more details.

“The US should know that it can neither browbeat the DPRK with any economic sanctions and military threats and blackmail nor make the DPRK flinch from the road chosen by itself,” North Korea’s official Rodong Sinmun said, using the initials of the North’s official name, the Democratic People’s Republic of Korea.

Global markets reacted to the escalation in tension, buying safe-haven assets such as gold, the Swiss franc and even the Japanese yen on expectation domestic investors would bring large amounts of currency home in times of uncertainty.

Stocks fell, with Japan’s Nikkei 225 index closing down half a percent, and South Korea’s KOSPI index 0.25 per cent lower.

Some experts said the test appeared to have been of a recently developed intermediate-range Hwasong-12 missile, but there was no clear consensus.

This month, North Korea threatened to fire four missiles into the sea near the US Pacific territory of Guam after Trump said it would face “fire and fury” if it threatened the United States.

North Korea fired what it said was a rocket carrying a communications satellite into orbit over Japan in 2009 after warning of its plan. The United States, Japan and South Korea considered it a ballistic missile test.

Television and radio broadcasters broke into their regular programming with a “J-Alert” warning citizens of the missile launch. Bullet train services were temporarily halted and warnings went out over loudspeakers in towns in Hokkaido.

“I was woken by the missile alert on my cellphone,” said Ayaka Nishijima, 41, an office worker on Honshu island.

“I didn’t feel prepared at all. Even if we get these alerts there’s nowhere to run. It’s not like we have a basement or bomb shelter,” she told Reuters by text message.

US Secretary of State Rex Tillerson appeared to make a peace overture to North Korea last week, welcoming what he called its restraint by not conducting any tests since July.

The United States has said before all options, including military, are on the table, although its preference is for a diplomatic solution.

Some experts said Kim was trying to pressure Washington to the negotiating table with the latest tests.

“(North Korea) thinks that by exhibiting their capability, the path to dialogue will open,” Masao Okonogi, professor emeritus at Japan’s Keio University, said by phone from Seoul.

“That logic, however, is not understood by the rest of the world, so it’s not easy,” he said.

The Japanese military did not attempt to shoot down the missile which may have broken into three pieces, said Minister of Defence Itsunori Onodera.

Experts say defences in Japan and South Korea that are designed to hit incoming missiles would struggle to bring down a missile flying high overhead.

The United States is technically still at war with the North because their 1950-53 conflict ended in a truce, not a peace treaty. The North says it will never give up its weapons programmes, saying they are necessary to counter hostility from the United States and its allies.

The Gaming Show looks at the future of gaming in Cyprus