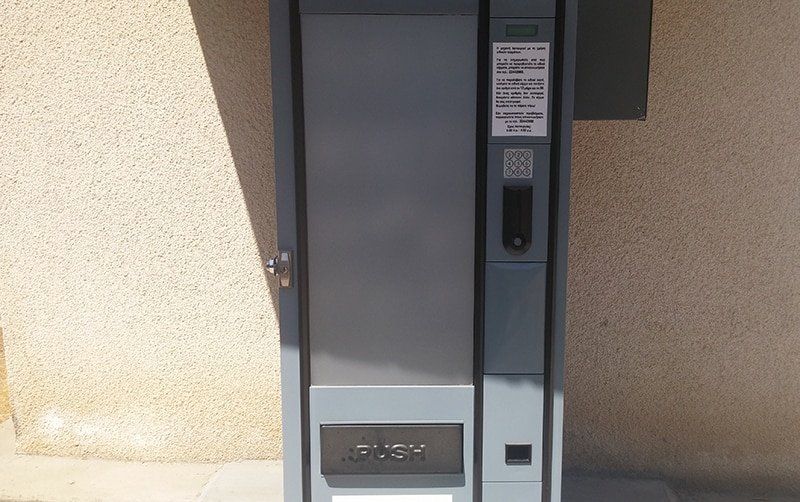 One of the new machines

Syringes, needles and other materials will soon be provided for drug users from something similar to vending machines once a few final procedures are completed, a health ministry official said on Tuesday.

Drug users will be given tokens to use in the machines, which allow them free access and help protect their safety.

“Tomorrow we will decide which organisations will hand out the tokens,” anti-drug council officer Evi Kyprianou said. “The machines are ready and we will start their use in September.”

The organisations are all treatment centres for drug addicts, whether they are outpatient or inpatient, and, of course, the anti-drug council of the health ministry itself.

The health ministry has purchased five of the appliances and placed one of them in each district.

Once a person has a token they can use it any number of times because after each use of the machine the token is returned. The machine contains boxes with sterile needles, syringes, alcohol swabs and leaflets with information.

The machines will also contain condoms in an effort to encourage intravenous drug users to have safe sex.

According to the anti-drug council, the materials are much-needed. “Forty four per cent of people who inject once in their lives have been diagnosed with hepatitis C,” Kyprianou explained, adding that last year 1,308 people requested treatment for drug abuse.

Hepatitis is transmitted though contact with contaminated blood, and over 80 per cent of people infected with the hepatitis C virus contracted it from unsafe injection drug use.

Cyprus is among the countries with the lowest provision of needle exchange programmes in Europe and this puts drug users at high risk, as shared needles and syringes greatly increase the chances of spreading AIDS.

There is currently only one place in Cyprus where people could just walk in and get similar materials for free, Stochos opposite the Phaneromeni high school in Nicosia. At this centre, drug users have been able to get syringes, coffee and meet to have a chat since it was opened in 2014. It was established by the council to help those drug users who are cut off from networks and other sources of help. Counsellors and health seminars are also available.

Around the world, heroin, cocaine, crack and methamphetamine are the most commonly injected street drugs. In Cyprus, heroin was responsible for most of the 160 drug-related deaths in the previous 10 years. As the council pointed out, intravenous drug users especially of heroin, have a mortality rate 20 times greater than the rest of the population.

A recent report by the anti-drug council reveals that the most widely used stimulant is cocaine with some 0.6 per cent of 15 to 34-year-olds admitting to using it in the last year while the percentage of methamphetamine use in Cyprus is 0.4 per cent in the age group 15 to 34.

Moody’s upgrades RCB’s deposits rating to B1 from B3