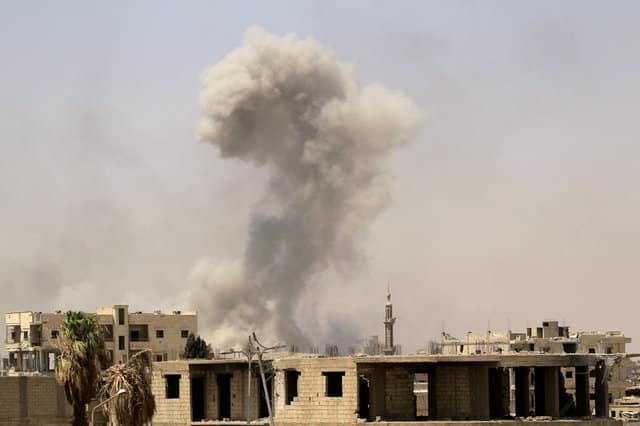 The United Arab Emirates urged Iran and Turkey on Monday to end what it called their “colonial” actions in Syria, signalling unease about diminishing Gulf Arab influence in the war.

Allied to regional powerhouse Saudi Arabia, the UAE opposes Syrian President Bashar al-Assad and his backer Iran, and is wary of Turkey, a friend of Islamist forces the UAE opposes throughout the Arab world.

UAE Foreign Minister Sheikh Abdullah bin Zayed Al Nahyan urged “the exit of those parties trying to reduce the sovereignty of the Syrian state, and I speak here frankly and clearly about Iran and Turkey.”

He was speaking at a news conference with Russian counterpart Sergei Lavrov, whose country helps Assad militarily.

“If Iran and Turkey continue the same historical, colonial and competitive behaviour and perspectives between them in Arab affairs, we will continue in this situation not just in Syria today but tomorrow in some other country,” Sheikh Abdullah said.

The six-year-old war in Syria has dragged in regional and international players who have sought to advance their interests there: Iran has sent troops and military support to shore up Assad’s rule as he has battled mostly Sunni Muslim rebels backed by Saudi Arabia and other Gulf Arab states.

The Syrian army and its allies have regained lost territory with the help of Russian air strikes since 2015. At the same time, Islamic State is being pushed back from strongholds in Eastern Syria by the Syrian army and a rival offensive by Kurdish and Arab rebels backed by the United States.

Fearing expanded Kurdish influence along its border with Syria, US ally Turkey has grown increasingly uneasy about the rebels’ armed thrust.

Lavrov and Sheikh Abdullah said they agreed on a need for a negotiated end to the war. Russia is helping shepherd talks in the Kazakh capital Astana which has already produced “de-escalation” zones to reduce combat in three parts of Syria.

Lavrov said Russia hoped that efforts to unify the positions of Syria’s disparate opposition would aid the peace process.

“There were some deep disagreements in the past which led to the failure of some meetings, but we will continue encouraging the participation of all the platforms,” he said through a translator.