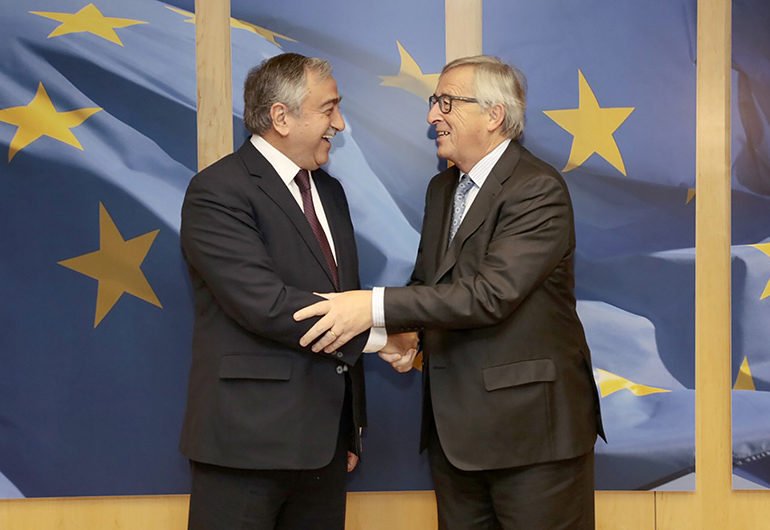 Turkish Cypriot leader Mustafa Akinci has sent a letter to the president of the European Commission Jean-Claude Juncker saying that the north’s harmonisation with the EU acquis should move ahead without interruption.

The letter was in response to a one sent to the leaders by Juncker after the talks in Crans-Montana collapsed last month.

In his letter, Juncker had said that the EU provided a strong framework “through which the historical bonds between the two communities must be strengthened further”.

“Any solution to the Cyprus problem should be a European solution because the EU affords the best prospects for a lasting peace and prosperity for the two communities and the country, but also for stability in the region,” the letter said. It also reaffirmed the EU’s readiness to continue to support Cyprus.

According to reports in the north on Wednesday, in his response, Akinci said that the efforts by Turkish Cypriots to increase their contacts with the EU as well as the preparation for harmonisation with EU laws should continue without interruption.

These efforts should not become victim to the “obstacles” imposed by the Greek Cypriot side, Akinci was quoted as saying.
He also reminded Juncker, that the technical support of the EU was needed in order to have a common future in the European Union.
Akinci also thanked Juncker for his continued interest in Cyprus and said that EU officials had witnessed the good intentions and constructive attitude demonstrated by the Turkish side in Crans-Montana, and expressed his disappointment for “the lost opportunity of this historic solution”.
Saying that the Greek Cypriots needed to change their mentality in order to share power and authority with the Turkish Cypriots, Akinci  added that it was obvious that the problems could not be overcome “by repeating the old methodologies”.

Trump says ‘talking not the answer’ on North Korea