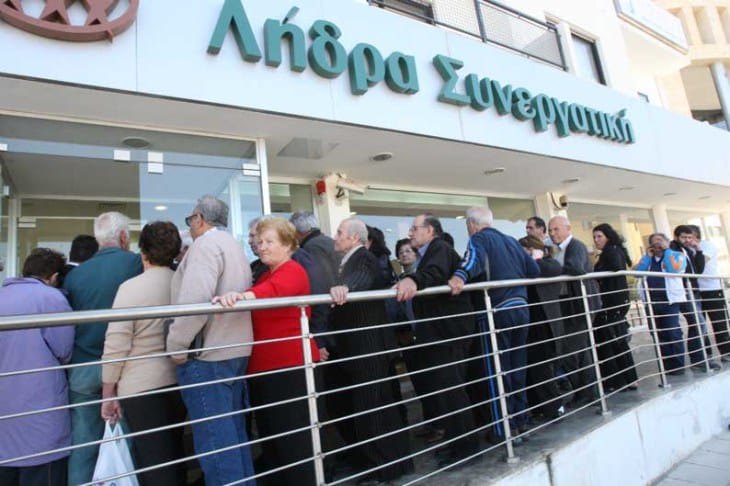 More measures need to be taken to further decrease the risk of bank runs in near-to-resolution situations.

Bank workers’ union Etyk said on Wednesday that the rejection by the finance minister of its demands for complete compensation of provident funds for losses suffered in the banking crisis, confirms that it is being unfairly treated.

The cabinet’s decision in July to compensate funds for 75 per cent of their losses with a cap of up to €100,000 per provident fund beneficiary, confirms that “bank workers are in the crosshairs as it provocatively ignores previous commitments given to us,” Etyk said in a statement on its website.

The statement, partly written in capital letters, with parts in bold or underlined, is an all-out-assault against Finance Minister Harris Georgriades, whom Etyk accuses of bias, and suggests that the union intends to step up the pressure against the government. It also bashes the Fiscal Council which also advised against a full reinstatement of provident funds.

Provident funds which held €1.1bn in deposits, lost €763m in the banking crisis four-and-a-half years ago like any other depositor. Those at Bank of Cyprus saw 47.5 per cent of their uninsured deposits converted to equity as part of Cyprus’s bailout programme, while those at Cyprus Popular Bank, widely known as Laiki, lost everything in excess of €100,000.

“But the culmination of the hatred and mockery of bank workers was manifested in a comment of the minister during our meeting that even if more funds were given, he would propose that none should be given to bank workers,” the union said. “The leaders of our organisation also asked the President of the Republic for a meeting to discuss this burning issue”.

In April last year, President Nicos Anastasiades said that the government would compensate the funds to only 75 per cent, in accordance with previous statements by Georgiades.

Etyk did not spare the Fiscal Council, a body tasked with monitoring the drafting and implementation of the government budget to ensure fiscal responsibility, saying that “those circles targeting bank workers” also conscripted the council.

The fiscal watchdog said on August 22, that the full compensation of provident funds would increase the systemic risk “with incalculable consequence as it would send the message that the taxpayer would be liable for mistakes of institutional investors.

The union, refuted that the managing committees of each provident fund had any responsibility for the prudent administration of their funds and blamed the Registrar of Occupational Retirement Funds, who supervises provident funds. “The funds of both funds were trapped in both banks with the responsibility of the Registrar who didn’t allow risk spreading,” the union said. It added that this was particularly the case with Laiki, which went into the hands of the government after its nationalisation in May 2012.

Theophanis Tryphonos, head of the Social Insurance Services of the Ministry of Labour, who supervises provident funds, said that he repeatedly asked their management committees to avoid risk concentration as early as 2010 and 2011 and as late as weeks before the banking crisis.

Tryphonos, who was commenting in a telephone interview, reiterated that he advised funds managed by bank workers to disperse risk after banks agreed to disburse €1.5n in gratuity fees in January 2013.

In its statement, the union, known for its militant rhetoric and practices, mocked Georgiades for his concern about taxpayers. It cited the €1.7bn capital injection to the cooperative banks – which helped the state avoid losses several times that amount – and the support extended to the pension fund of state-owned power producer Electricity Authority of Cyprus to cover losses from mismanagement, which is provided by law.

The union also criticised Georgiades for the up to €1.1bn decrease in the equity of the Cyprus Cooperative Bank since its nationalisation, and the government’s decision to assume the responsibility for €185.3m in guaranteed debt of municipal authorities in July.

Etyk also resorted to comparing the plight of its retired members with that of civil servants, saying that bank workers paid up to one tenth of their income for contributions “and get no pension from their employer” unlike workers in the government sector and state-owned organisations.

The union also said that it had received both verbal and written assurances from the government given as early as in the summer of 2013, months after the banking crisis pushed the island’s economy into uncertainty, that it would offer full compensation.