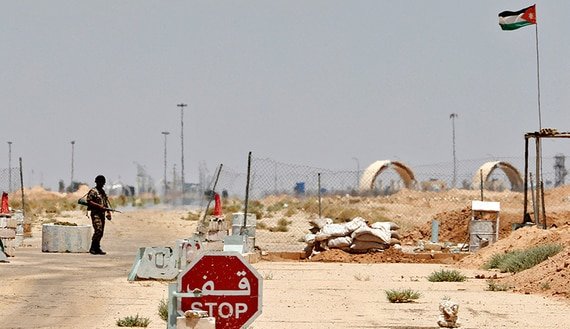 Jordan will open its main border crossing with Iraq on Wednesday for the first time since 2015, now that Iraqi forces have gained control of the main highway to Baghdad from Islamic State militants, both governments said.

Iraqi troops pulled out of the Tureibil post, on the 180km border, in summer 2014 after the militants secured nearly all the official crossings of the western frontier as they swept through a third of the country.

Commercial traffic continued for a year after until Iraq launched an offensive in July 2015 to reclaim the predominately Sunni Anbar province and deprive the militants of funds raised from truck drivers forced to pay a tax on cargo coming in from Jordan.

Tureibil would open on Wednesday after the road was secured “from attacks and criminal gangs,” the Iraqi and Jordanian governments said in a joint statement.

Officials have said that customs and border arrangements have been finalised, with security measures in place to ensure the 550km highway from the border to Baghdad was safe.

“The opening of the crossing is of great importance to Jordan and Iraq … It’s a crucial artery. Jordan and Iraq have been discussing reopening it for a while,” Interior Minister Ghaleb al Zubi said last week.

Several trade and business officials had said they had been invited to an event on Wednesday to mark the re-opening that would include senior Jordanian and Iraqi officials.

Since last year, the Iraqi army has regained most of Anbar province’s main towns that fell to the ultra-hardline jihadist group.

The vast desert province is an historic hotbed of the hardline Sunni insurgency sparked by 2003’s US-led invasion of Iraq, which empowered the oil-rich nation’s Shi’ite majority.

Iraq has also been working on securing the highway that connects Iraq’s Basra port in the south to Jordan, where the Red Sea port of Aqaba has long served as a gateway for Iraqi imports coming from Europe.

Although the highway has been secured after driving out the jihadists, the threat of hit-and run attacks on convoys and the army are ever present, according to security experts.

There have been several attacks by militants near al-Rutba town, the last town before the border with Jordan.

A senior Western diplomatic said Iraqi authorities have awarded a contract to a US security company that will employ a local force to secure the highway. The source gave no further details.

Jordan hopes the reopening of the route will revive exports to Iraq, once the kingdom’s main export market, accounting that accounted for almost a fifth of domestic exports or about $1.2 billion a year, according to the International Monetary Fund.

They have fallen by more than 50 per cent from pre-crisis levels.

“This will increase industrial exports and also revive the two countries’ trucking industry. It’s a major boost to the economy,” Nael Husami, general manager of the Amman Chamber of Industry, adding transport costs would fall by nearly half.

Jordanian exporters have had to use more expensive sea routes to Iraq’s Um Qasr port or another land route across Saudi Arabia and Kuwait, businessmen have said.

The restoration of trade links will also give a push to an oil pipeline project running from Basra to Aqaba. Prime Minister Hani al Mulki had visited Baghdad earlier this year to revive the frozen project.

Jordanian officials are hopeful the crossing with Syria on its northern border can also open by the end of the year once a US-Russian de-escalation zone in southwest Syria that includes the area is cemented.

The International Monetary Fund recently said that prolonged conflicts in neighbouring Syria and Iraq were weighing on the kingdom’s debt-ridden economy and the opening of these export routes would boost economic growth.

Serving the underserved with architects and planners

Weak points? I have none, says shipmanagement chief