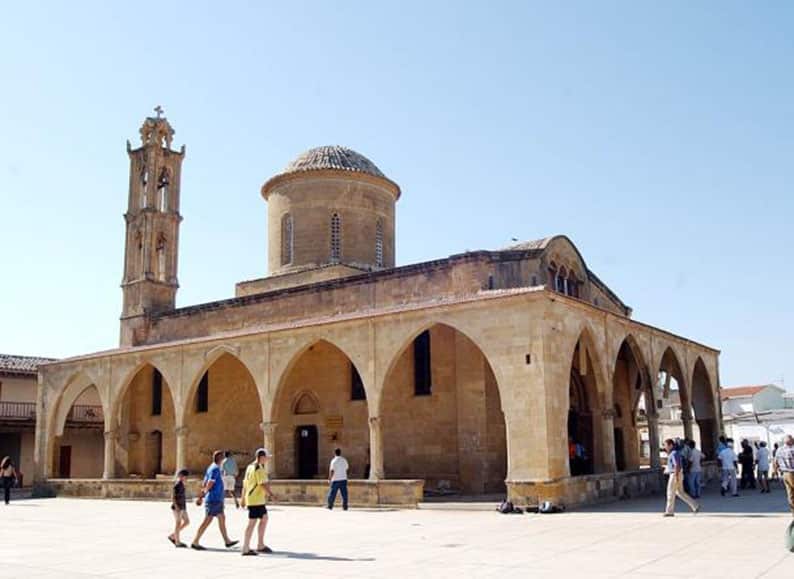 Church, government and politicians on Wednesday condemned the authorities in the north for declining permission for the annual church service at Ayios Mamas in Morphou on September 1, 2 and 3.

Shortly after the Bishopric of Morphou issued a statement, Foreign Minister Ioannis Kasoulides weighed in when asked about the move during a joint press conference with his Danish counterpart Anders Samuelsen at the foreign ministry.

Kasoulides said: “It is regrettable that after a number of years [of allowing the church service], that the occupying regime is taking this decision which does little to help the climate in today’s times where pilgrimages of this kind are reciprocal.”

“And I hope the explanation that will be given will not prove to be something that might allow the prohibition of such pilgrimages in the future,” he said.

Political parties also issued statements, all condemning the move. Ruling Disy said it was unacceptable when festivals of different religions coincide that anyone can just decide “without any discussion” to abolish or even transfer the date for the celebrations of one of the two, especially after 14 years.

“We call on the Turkish Cypriot leader, Mustafa Akinci to show the necessary will and determination to avoid such decisions, which only achieve is the consolidation the distance between Greek Cypriots and Turkish Cypriots,” it said.

“Although our request has been submitted to the United Nations Peacekeeping Force since the beginning of July 2017, the occupation authorities notified us through the UN on August 22, 2017 of their negative response,” the Bishopric said. “They used religious reasons as an excuse, namely that the liturgy celebrations of Ayios Mamas coincide with the beginning of Kurban Bayram on September 1.”
It added: “In our view, there is nothing that prevents Christians and Muslims in this country from holding parallel celebrations.”

The Bishopric’s statement said it condemned “this unacceptable act of the occupation authorities as contrary to international law” and also Article 18 of the International Covenant on Civil and Political Rights of the Universal Declaration of Human Rights, on the basis of which every person has the right to freedom of thought, conscience and religion, as well as freedom, alone or with others, public or private, to manifest his religion or religious beliefs.

It also alluded to the fact that freedom of religion did not belong only to one party.

Bayram or Eid al-Adha as it is also known is always on the same day of the Islamic calendar, the date on the Gregorian calendar varies from year to year. The Islamic calendar is a lunar calendar and the Gregorian calendar is a solar calendar. This is the first instance where Bayram has coincided with the feast day of Ayios Mamas since pilgrimages to the Morphou church were allowed to resume some 14 years ago.

Last year, Bayram began on September 12 and next year it will begin on August 23.

A statement on Wednesday from Turkish Cypriot authorities, reported in the media in the north, cited security reasons for declining permission for the church service. It could take place after September 5 however, when Bayram ends, the reports said.

Muslims from the north are expected to cross to the Hala Sultan Tekke that day to mark the end of their religious celebrations.

But the Morphou Bishopric said it believes “that such moves add further obstacles to the road that would lead to the reunification of the island, since a solution to the Cyprus problem cannot be manifest by restricting basic human rights, especially freedom of religion”.

The Bishopric said that the celebrations for Ayios Mamas would now be held on September 1 at 6.30pm at the church of Ayios Mamas in  Xyliatos in the Nicosia district, and on the saint’s feast day, September 2 in the same church at 7am.

“Unfortunately, for the first time since 2003, our municipality is obliged to inform its citizens that this year they will not be able to honour the patron saint of our city in occupied Morphou,” it said.

“It is with sadness we observe that the decision of the occupation authorities is further aggravating the already tense climate that prevails due to the recent collapse of the talks, and unfortunately puts another brick on the wall that the conqueror is attempting to build to keep the two communities apart”.

It added that the mere invocation of the argument that Christians and Muslims are unable to hold parallel religious celebrations “is an indirect confession from the Turkish side that their intention was never the reunification of our homeland” and shows no goodwill on the part of the representatives of the Turkish Cypriot community to resolve the Cyprus problem.

Holding liturgy in the north shows that Turkish Cypriots believe in multiculturalism, Ctp said, adding that the excuse given was irrelevant.

Serving the underserved with architects and planners