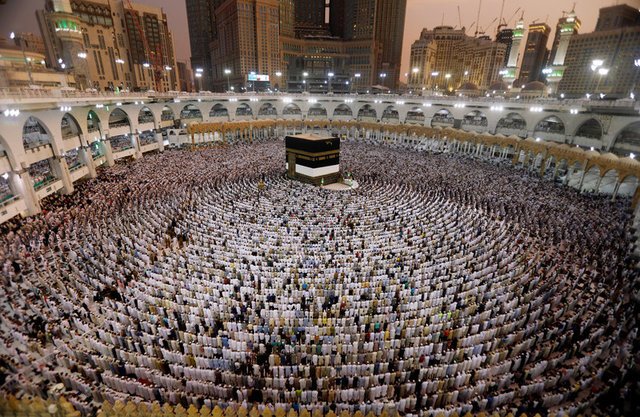 Muslims pray at the Grand mosque ahead of the annual Haj pilgrimage in Mecca, Saudi Arabia

Hundreds of thousands of Muslims began the annual haj pilgrimage on Wednesday, donning traditional white garments and heading to a tent camp outside the holy city of Mecca in an itinerary retracing the route Prophet Mohammad took 14 centuries ago.

Nearly 2 million worshippers, from nearly every country, arrived in Saudi Arabia this week for the five-day ritual, which is a once-in-a-lifetime religious duty for every able-bodied Muslim who can afford it.

Some prayed at the Grand Mosque before heading to the Mina area or towards Mount Arafat, east of Mecca, where the Prophet is believed to have delivered his final sermon to followers.

They walked or took buses, with traffic police using loudspeakers to try to direct crowds speaking a medley of languages. They were dressed in simple white robes, marking a state of ihram, or ritual purity.

Moroccan pilgrim Rida al-Belaqili, waiting to board a bus to Arafat, struggled to find words to describe his feelings.

“We are meeting people from every country and every nationality. There is a sort of unity,” he said. “I hope this will recharge Muslims’ faith and spirituality. I ask God to grant me and all Muslims forgiveness.”

He is performing haj with his wife, Latifa al-Omari, for the second time.

“Haj is not a hardship. This joy and happiness makes you forget everything,” she said.

All the pilgrims will arrive by Thursday morning at Mount Arafat, about 15km east of Mecca.

The Eid al-Adha, or feast of the sacrifice, begins on Friday, when pilgrims begin three days of casting stones at walls in a symbolic renunciation of the devil.

The world’s largest annual gathering of Muslims has in the past seen deadly stampedes, fires and riots, with authorities sometimes struggling to respond.

A crush in 2015 killed nearly 800 pilgrims, according to Riyadh, although counts by countries of repatriated bodies showed over 2,000 people may have died, more than 400 of them Iranians.

Saudi Arabia stakes its reputation on its guardianship of Islam’s holiest sites – Mecca and Medina – and organising the pilgrimage.

Authorities say they have taken all necessary precautions, with more than 100,000 members of the security forces and 30,000 health workers on hand to maintain safety and provide first aid.

Employers rush to register illegal workers ahead of deadline