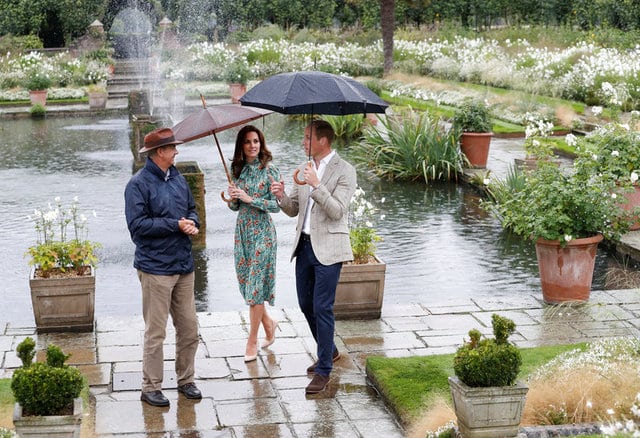 Britain's Prince William, Duke of Cambridge and Catherine Duchess of Cambridge visit the White Garden in Kensington Palace in London

Princes William and Harry paid a quiet tribute to their mother Princess Diana on Wednesday, a day before the 20th anniversary of her death that has reignited interest in one of the world’s most famous women.

Diana’s two sons met representatives of the charities she supported in a public garden at Kensington Palace, their home and where their mother lived until she was killed in a car crash in Paris on Aug. 31, 1997.

Outside the palace gates supporters of the royal family gathered in the rain to mark the occasion, with many praising Diana’s sons for keeping her in the public memory.

“Everyone remembers where they were the day she died, and when they heard about it,” said 74-year-old Nancy Purinton, on holiday with her husband from the United States. “It was pretty dramatic.”

Sheltering under umbrellas, William, Harry and Kate took a tour of the renamed White Garden, which has been transformed temporarily with white English roses and forget-me-nots planted earlier this year.

The palace’s head gardener and a gardener who knew Diana from her frequent visits to the spot, usually known as the Sunken Garden, explained the design and pointed out some of the princess’s favourite plants.

The gathering follows weeks of renewed interest in Diana, the first wife of heir-to-the-throne Prince Charles. She has once again become front page news with new revelations about her life and a raft of TV documentaries to mark the anniversary.

Previous anniversaries of her death have passed with little fuss, suggesting that the “People’s Princess”, as she was dubbed by then-British Prime Minister Tony Blair, had perhaps lost some of her allure and relevance.

But with the popular William and Harry coming to the fore, the 20th anniversary has sparked a re-examination of the role Diana played in Britain and the royal family, from her lavish wedding in 1981 to her bitter divorce.

The princes have also been increasingly willing to speak about the trauma of her death and its lasting impact.

“I’m glad that they’ve finally loosened up a little bit to talk about her and how really hard it was for them,” Purinton said of the princes. “I think they were ‘stiff upper lip’ for so long and now they’re able to talk about it, which I think helps other people if they’re grieving.”

Diana’s death in a Paris underpass sparked an outpouring of grief that stunned many Britons, with thousands of mourners descending on the palace to leave flowers and letters to pay tribute to a woman who had become a global fashion icon and charity campaigner.

“I was here the first time around,” Alexia McDonald, 54 and a full-time carer, told Reuters. “We were similar age … (I remember) seeing the fairytale wedding. She was my generation and I just felt a connection.

“I felt I needed to pay my respects to Diana.”

Outside the palace on Wednesday, Britons again left flowers, photographs and messages attached to the front gates, although in far fewer numbers than immediately after her death.

After touring the garden, the princes met representatives from causes Diana had supported, including Great Ormond Street Hospital, the National Aids Trust and The Leprosy Mission.

On Thursday, they will reflect on their mother’s life in private.