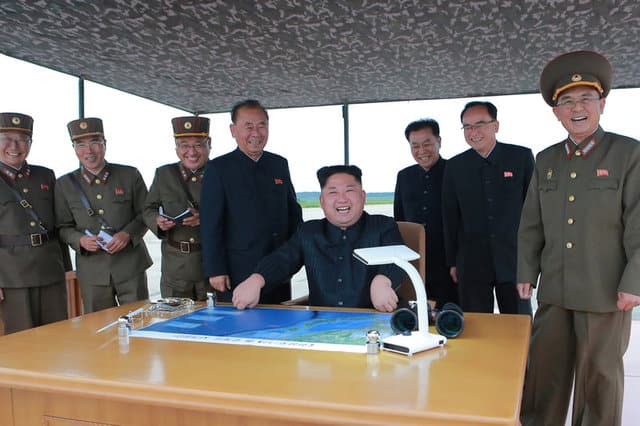 U.S. President Donald Trump on Wednesday dismissed any diplomatic negotiations with North Korea, saying “talking is not the answer,” one day after Pyongyang fired a ballistic missile over Japan that drew international condemnation.

Renewing his tough rhetoric toward North Korea, Trump wrote on Twitter, “The U.S. has been talking to North Korea, and paying them extortion money, for 25 years. Talking is not the answer!”

Trump, who has vowed not to let North Korea develop nuclear missiles that can hit the mainland United States, said in a statement on Tuesday that “all options are on the table.”

North Korea said the launch of an intermediate-range ballistic missile (IRBM) on Tuesday was to counter US and South Korean military drills and was a first step in military action in the Pacific to “contain” the US island territory of Guam.

The United Nations on Tuesday condemned as “outrageous” North Korea’s firing of the missile over Japan, demanding that the isolated country halt its weapons program but holding back on any threat of new sanctions.

A US Congressional Research Service report said between 1995 and 2008, the United States provided North Korea with over $1.3 billion in assistance. Slightly more than 50 per cent was for food and about 40 per cent for energy assistance. The assistance was part of a nuclear deal that North Korea later violated.

Since early 2009, the United States has provided virtually no aid to North Korea, though periodically there have been discussions about resuming large-scale food aid.

The latest tweet by the Republican US president drew criticism from Democrats in Washington.

Responding to Trump’s message, Senator Chris Murphy wrote on Twitter: “Bar is high, but this is perhaps the most dangerous, irresponsible tweet of his entire Presidency. Millions of lives at stake – not a game.”

North Korea’s leader, Kim Jong Un, ordered the launch to be conducted for the first time from its capital, Pyongyang, and said more exercises with the Pacific as the target were needed, the North’s KCNA news agency said on Wednesday.

“The current ballistic rocket launching drill like a real war is the first step of the military operation of the KPA in the Pacific and a meaningful prelude to containing Guam,” KCNA quoted Kim as saying. KPA stands for the Korean People’s Army.

Trump’s latest comments appeared to undercut his secretaries of defence and state, who have emphasised finding a diplomatic solution to North Korea’s nuclear ambitions. Earlier this month Defence Secretary Jim Mattis told reporters the US effort “is diplomatically led. It has diplomatic traction. It is gaining diplomatic results.”

North Korea this month threatened to fire four missiles into the sea near Guam, home to a major US military presence, after President Donald Trump said the North would face “fire and fury” if it threatened the United States.

For its part, the US Defence Department’s Missile Defence Agency announced a “complex” and successful missile defence flight test off Hawaii early on Wednesday, intercepting a medium-range ballistic missile target.

The 15-member Security Council said it was of “vital importance” that North Korea take immediate, concrete actions to reduce tension and called on all states to implement UN sanctions.

However, the US-drafted statement, which was agreed by consensus, does not threaten new sanctions on North Korea.

Diplomats say veto-wielding council members China and Russia typically only view a test of a long-range missile or a nuclear weapon as a trigger for further possible sanctions.

China’s and Russia’s ambassadors to the United Nations said they opposed any unilateral sanctions on North Korea and reiterated calls to halt deployment of a US missile defence system in South Korea.

Speaking in Beijing, Chinese Foreign Minister Wang Yi said China was discussing the situation with other Security Council members and would make a “necessary response” based on the consensus reached. China is the North’s lone major ally.

Unilateral sanctions did not accord with international law, Wang added, a reference to sanctions imposed on Chinese firms and citizens by the United States and Japan.

Speaking during a visit to the Japanese city of Osaka, British Prime Minister Theresa May called on China to put more pressure on North Korea, saying Beijing had a key role to play.

Asked about her comments, Chinese Foreign Ministry spokeswoman Hua Chunying said some “relevant sides” were only selectively carrying out the UN resolutions by pushing hard on sanctions yet neglecting to push for a return to talks.

She said this was not the attitude “responsible countries” should have when the “smell of gunpowder” remained strong over the Korean peninsula.

“When it comes to sanctions, they storm to the front but when it comes to pushing for peace they hide at the very back,” Hua told a daily news briefing.

Tuesday’s test was of the same Hwasong-12 missile Kim had threatened to use on Guam, but the test flight took it in another direction, over northern Japan’s Hokkaido and into the sea.

North Korea has conducted dozens of ballistic missile tests under Kim in defiance of U.N. sanctions, but firing a projectile over mainland Japan was a rare and provocative move.

The 2,700 km (1,680 miles) that the missile flew before splashing down was much shorter and at a lower trajectory than that of an earlier launch of the same missile type.

The US Defence Department’s Missile Defence Agency and the crew of the USS John Paul Jones conducted a “complex missile defence flight test” off Hawaii early on Wednesday, resulting in the intercept of a medium-range ballistic missile target, the agency said.

“We are working closely with the fleet to develop this important new capability, and this was a key milestone in giving our Aegis BMD (Ballistic Missile Defense) ships an enhanced capability to defeat ballistic missiles in their terminal phase,” said agency director Lieutenant General Sam Greaves in a statement, without mentioning North Korea.

“We will continue developing ballistic missile defense technologies to stay ahead of the threat as it evolves.”