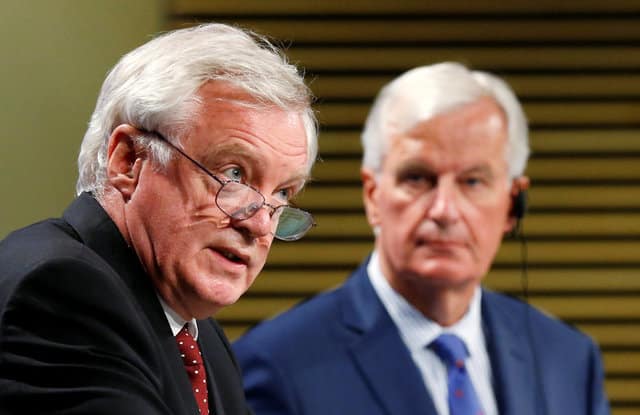 Britain’s withdrawal negotiations with the European Union failed to make the kind of progress needed to move into a new phase in October, chief EU negotiator Michel Barnier said on Thursday after four days of talks.

However, both he and British Brexit Secretary David Davis spoke of a constructive attitude on both sides aimed at avoiding disruption when Britain leaves the bloc, deal or no deal, in 19 months time.

And despite sharp differences over how much Britain will legally be obliged to pay Brussels onBrexit, Davis said London was willing to offer more than the bare legal minimum.

“We have made no decisive progress on the main topics,” Barnier told reporters. “At the current rate, we are a long way from seeing progress sufficient for us to recommend to the European Council launching talks on the future relationship.”

Two more rounds of talks are scheduled in Brussels before Prime Minister Theresa May meets her 27 EU peers at a Council summit on Oct. 19-20, where both sides have been hoping that Barnier might signal “sufficient progress” has been made on a divorce settlement for talks to start on a post-Brexit free trade deal which is a major objective for London come 2019.

Both sides stressed the deliberately vague benchmark could still be met. Davis, sparring on occasion on the podium with Barnier after what Davis called “some tough exchanges” behind closed doors, again called for the EU to show more “flexibility” and start discussion on the future relationship straight away.

Barnier, denying a reporter’s suggestion that he was “angry” by characterising his attitude as “impatient” and “determined”, again rejected British accusations that his need for 27-nation consensus was crimping his ability to negotiate and compromise.

“Our discussions this week have exposed yet again that UK’s approach is substantially more flexible and pragmatic than that of the EU,” said Davis.

The Union has made outline agreement on the rights of 4.5 million expatriates, border arrangements on Ireland and settling Britain’s financial obligations as a condition for discussing a transition to a free trade pact.

There was some progress on the first two areas, but money remains a major sticking point, along with how far Britain remains subject to EU judicial oversight.

British negotiators made their first response on Tuesday to an EU demand which Brussels has said might be worth something like €60 billion on Brexit. Barnier said they had, without naming a figure, taken a narrow legal approach that ignored obligations which would continue after Britain leaves.

However, EU officials later highlighted comments Davis made in the news conference that Britain was willing to negotiate its payment upwards beyond what it thinks is legally essential. Citing May’s withdrawal letter Davis stressed Britain would also consider keeping on good terms with the EU in settling the bill.

“We’ve a very different legal stance,” he said, before underlining: “The settlement should be in accordance with law and in the spirit of the UK’s continuing partnership with the EU.” He later also said Britain recognised “moral obligations”.

The two men maintained a genial pose for the cameras, though he bristled when Barnier dismissed as “impossible” some of Britain’s demands to benefit from the EU single market without accepting EU legal authority and said he thought Britons were “nostalgic” for the open market in Europe they had helped build.

“I wouldn’t confuse a belief in the free market for nostalgia,” Davis said after Barnier had again outlined the EU view that Britain could not have full market access in future.