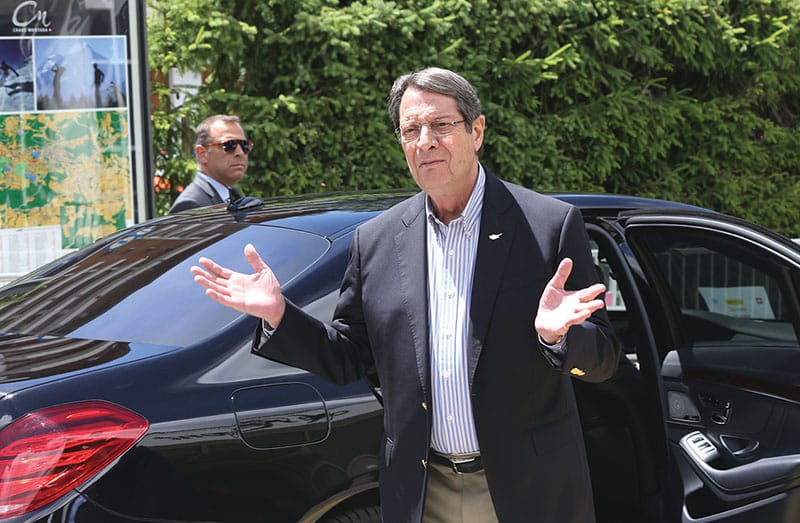 The president said he was trying to set the record straight

President Nicos Anastasiades on Thursday rejected suggestions he had committed an offence by supposedly publishing classified information, after he sent a file containing documents relating to the Cyprus talks to various people, including journalists.

He reiterated that he had categorised the documents as confidential because they were for the recipients’ personal use “to avoid a repeat of claims that could possibly be exploited by the Turkish side.”

Anastasiades said he sent the file following criticism from the Greek Cypriot side that he was also to blame for the collapse of the talks.

“…Taking into consideration the prejudice of certain diplomatic circles but also the Turkish side’s effort to assign the blame for the collapse to Greek Cypriots, I judged that instead of opting for confrontation with people I think acted out of genuine interest for a solution of the Cyprus problem, it was better to address them with a personal letter, explaining what happened at Crans Montana,” he said in a statement.

Thursday’s statement came amid fierce criticism that followed the revelation he had sent documents to select people – including a number of journalists – outlining why the talks failed in Crans-Montana.

His political opponents censured the decision, with some suggesting he had committed an offence.

Anastasiades said the documents he had sent were not classified. They were the June 4 announcement after a meeting between himself, Turkish Cypriot leader Mustafa Akinci, and UN Secretary General Antonio Guterres, the UN parameters submitted in Crans Montana “which have repeatedly seen the public light,” Greek Cypriot proposals, which were also well known, Turkey’s proposals, which he had outlined in public previously, excerpts from the Greek Cypriot minutes, and excerpts of a talk with a UN official, which he had also made public.

“It becomes clear that none of the documents can be judged as classified,” he said, repeating that he just wanted to emphasise they were for the personal use of the recipient.

One of the recipients, main opposition Akel leader Andros Kyprianou said he was upset because he could not see a reason why other party chiefs had not received the file.

Kyprianou said he received the documents two weeks after they were delivered because he had been abroad and most party employees were away on holiday.

He told state radio that he neither asked for nor needed the documents because he knew well what happened during the talks.

The Akel leader said they were missing the most important part of the negotiation, the last dinner before the collapse.

The talks collapsed on July 7 with both sides blaming each other for the failure.