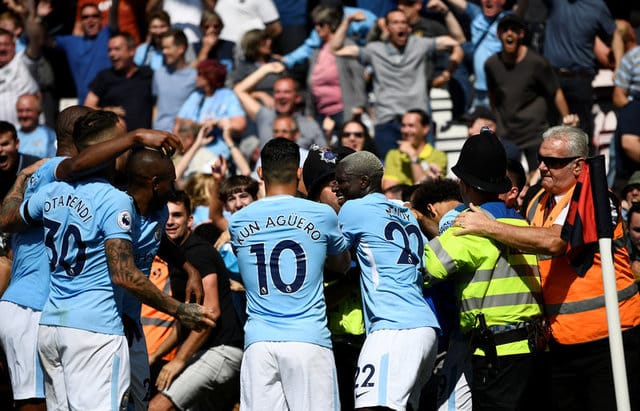 English football clubs splurged on the final day of the transfer window, laying out 210 million pounds to take total gross spending to a record-high 1.4 billion pounds as the Premier League again flexed its unrivalled financial muscles.

Figures from Deloitte’s Sports Business Group showed a 23 percent rise from the previous record, set last summer. The spending would have been even higher had several proposed transfers gone through as expected on Thursday.

Even so, Premier League clubs are not breaking the bank, thanks to lucrative domestic and overseas broadcast deals.

“Importantly, and when analysed in the context of generating record broadcast, commercial and matchday revenues, Premier League clubs are spending well within their means,” Dan Jones, a partner in Deloitte’s Sports Business Group, said.

“For the last 15 years, annual transfer spending has remained within the range of between a fifth and a third, and averaged at around a quarter, of total revenues.”

Based on income estimates for the Premier League’s 20 clubs this season, the 1.4 billion pounds of new signings represent an average of 31 percent of total revenue per club, down from 2008-09, when the figure peaked at 34 percent.

Watford’s net spending of 41 million pounds was the highest compared with income at 44 percent.

Premier League spending during the window dwarfed that of other top European leagues. Serie A’s total of 735 million pounds was the next highest figure, followed by Ligue 1 at 590 million, the Bundesliga at 510 million and La Liga, where the window closes on Friday, at 500 million.

Spain’s top three clubs — Real Madrid, Barcelona and Atletico Madrid — all made a profit in the window, according to figures from Bonus Code Bets. Germany’s Borussia Dortmund earned the biggest profit as a share of revenue (30 percent), while Italy’s AC Milan spending left it with a deficit of 162 million euros, representing 76 percent of their total income.

Manchester City were England’s biggest spenders, even though their late 50 million pound-plus bid for Arsenal’s Alexis Sanchez came to nothing as the Chilean stayed put. The club spent 215 million pounds on the likes of full-backs Benjamin Mendy and Kyle Walker and playmaker Bernardo Silva.

Chelsea’s deadline-day signings of Torino’s Davide Zappacosta and Leicester City midfielder Danny Drinkwater put them in second place on 180 million, ahead of Manchester United and Everton, both of whom spent 145 million.

Arsenal and Tottenham Hotspur were two of only five clubs who made a net transfer profit in the latest window. Swansea City, Burnley and Stoke City were the others.

While the head-turning deals were signed by England’s biggest clubs, the Premier League’s current 5.13 billion-pound domestic broadcasting deal meant even the lesser lights had big money to spend.

“While the transfer record for a single player has again been broken by a major European club (Paris St Germain for Neymar), the Premier League’s clubs enjoy an unrivalled depth of purchasing power,” Jones said.

“This is as a result of the League’s relatively equal — and transparent — distribution of broadcast revenues.”

While the largest sums were spent on acquiring players from overseas clubs, the 545 million pounds of inter-Premier League trading also represented a record.

Romelu Lukaku’s 90 million-pound move from Everton to Manchester United was the largest deal between English clubs. Other big ones included Kyle Walker’s 50 million-pound switch to Manchester City from Tottenham Hotspur and Gylfi Sigurdsson’s transfer from Swansea to Everton for 45 million.

Madonna has reportedly moved to Lisbon