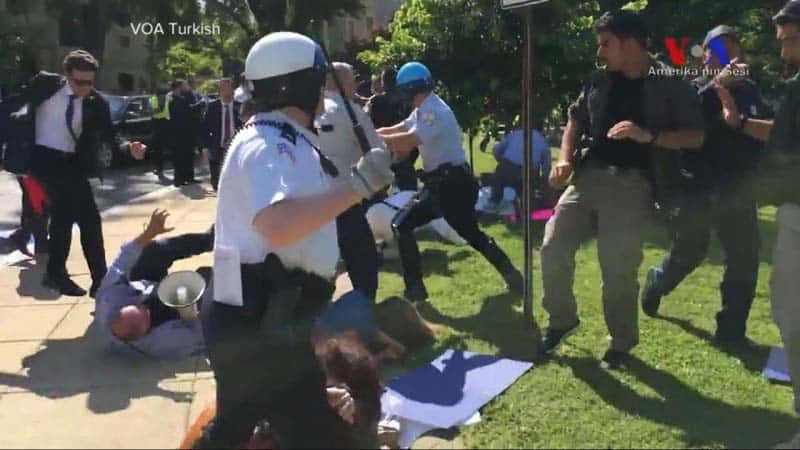 A decision by US authorities to arrest Turkish security guards involved in a brawl in Washington in May is a scandal, President Tayyip Erdogan said on Friday.

US prosecutors charged a dozen Turkish security and police officers with assault after an attack on protesters in Washington during Erdogan‘s visit to the US capital in May.

“This is a complete scandal. It is a scandalous sign of how justice works in the United States,” he told reporters after prayers for the Muslim Eid al-Adha celebration.

The May 16 skirmish, caught on video, injured 11 people outside the Turkish ambassador’s residence and further strained bilateral ties at a time when the Nato allies are in sharp disagreement over policy in Syria.

Turkey blamed the violence on demonstrators linked to the Kurdistan Workers Party (PKK), while the Washington police chief described it as a brutal attack on peaceful protesters.

Erdogan said the United States had failed to provide him protection from members of the PKK during his visit, and added he would discuss the issue with President Donald Trump in his next visit.

The charges against some members of Erdogan‘s security detail sent a clear message that the United States “does not tolerate individuals who use intimidation and violence to stifle freedom of speech and legitimate political expression,” US Secretary of State Rex Tillerson said in a statement.

Since a failed coup attempt last year, Turkey has sacked or suspended more than 150,000 officials in purges, while sending to jail pending trial some 50,000 people including soldiers, police, civil servants.

The crackdown has targeted people whom authorities say they suspect of links to the network of US-based Muslim cleric Fethullah Gulen. Ankara blames Gulen for the coup. He denies any involvement.

“I am having trouble understanding what the United States is trying to do with all these developments.”

Singing the stories of women in jazz