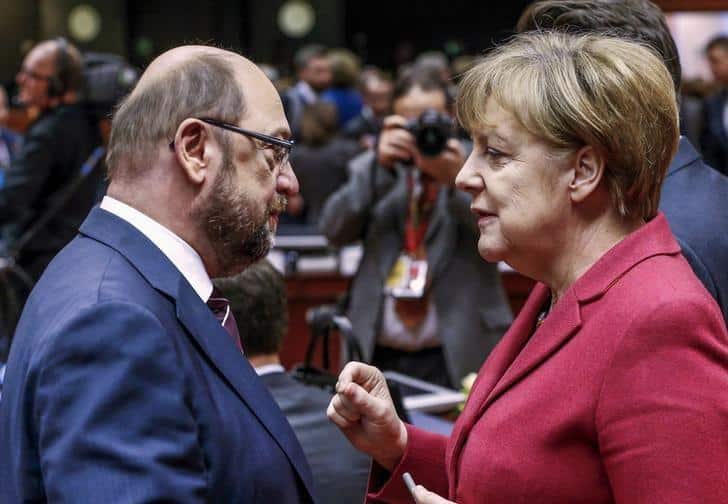 “I am not in the least bit nervous,” he told Bild newspaper in an interview conducted after media reports suggesting his predecessor as leader had given up hope of an SPD victory.

“A successful duel can create momentum,” Schulz said in a separate interview with the RND network of newspapers.

Merkel, 63, has been chancellor since 2005 and is widely seen as Europe’s most influential politician. She has weathered storms over mass immigration and financial and political turmoil in the European Union, while the SPD, Germany’s oldest party has struggled to promote a strong rival.

Schulz’s campaign got off to a promising start early this year, with thousands flocking to the party after he was chosen as candidate; but three crushing defeats at the hands of the conservatives in regional elections, including in its heartland of North Rhine-Westphalia, knocked him off course.

“These were very difficult defeats for the SPD…but nonetheless, 46 percent of voters have yet to make up their minds,” a tired-looking Schulz, 61, said in a live online interview with the mass-selling newspaper.

He said he would turn things around in the first and only televised debate between the pair ahead of the Sept 24 election.

“I believe we will certainly still win the election.”

The SPD, which has stewarded Europe’s biggest economy as junior partner to Merkel‘s conservatives for the last four years, was on 22 per cent in an opinion poll published on Friday, while the conservatives were on 39 per cent.

Almost half the 61.5 million people eligible to vote are expected to tune into the debate, pollster Forsa found. Nearly two-thirds of Germans expect Merkel to win the contest while 17 per cent expected Schulz to fare better, another poll showed.

It also found that if there were to be a direct vote for chancellor, 49 percent of Germans would pick Merkel, who is seen as a steady pair of hands at a time of global uncertainty, with Donald Trump in the White House and Britain preparing to leave the European Union.

Just 26 percent would opt for former European Parliament President Schulz, whose campaign focusing on social justice has struggled at a time when Germans are enjoying rising wages and record employment.

In a bid to appeal to the younger generation, Schulz told Bild the biggest domestic policy difference between him and Merkel was on pensions.

“If someone is in his early 40s, he will belong to the generation that pays ever more contributions and at the end will get the lowest pension in history from his pension insurance,” he said.