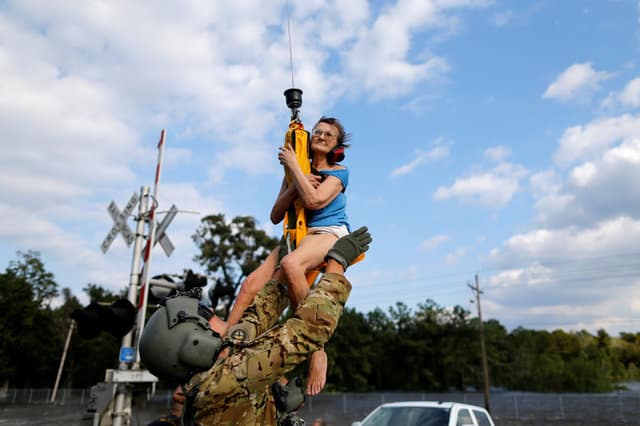 A flood-hit southeast Texas city lost its drinking water supply and police and soldiers rescued thousands still stranded on Thursday after powerful storm Harvey killed 44 people and displaced more than a million on the Gulf Coast.

Some 779,000 Texans have been told to leave their homes and another 980,000 fled voluntarily amid dangers of new flooding from swollen rivers and reservoirs, according to Department of Homeland Security acting secretary Elaine Duke.

The city of Beaumont, about 80 miles (130 km) east of Houston, had its water supplies cut off and was threatened by a rising river that forced the evacuation of its hospital and residents in neighboring Orange County.

There were explosions at a chemical plant about 25 miles (40 km) east of Houston after it was engulfed by floodwater.

The loss of water and health risks from flooding were among hazards emerging in the aftermath of Harvey, which roared ashore late last Friday as the most powerful hurricane to hit Texas in half a century. It has since been downgraded to a tropical depression as it heads inland, leaving devastation across more than 300 miles (480 km) in the southeast corner of the state.

Jessica Richard, 24, said she waited out the storm in her home in Port Arthur, about 85 miles (135 km) east of Houston, until Thursday morning when water on her street rose to waist-high. She was picked up by a passing truck.

Richard said her nephew had been trapped with several family members overnight in a flooded apartment. “He said there were snakes in the water and spiders crawling up the walls. But they got out,” she said.

At least 44 people were dead or feared dead in six counties including and around Houston, officials said. Another 19 remained missing.

In the U.S. energy hub of Houston, firefighters conducted a house-by-house search to rescue stranded survivors and recover bodies as some residents began to return to their homes to assess the damage.

Seventy percent of Harris County, which encompasses Houston, was covered with 18 inches (45 cm) or more of water, county officials said.

In Beaumont, doctors and nurses evacuated some 190 people from a hospital that halted operations after the storm knocked out water service in the city of almost 120,000 people.

Orange County ordered remaining residents to evacuate from low-lying areas after a forecast that the Neches River would crest on Friday, threatening homes.

“The American people are with you. We are here today, we will be here tomorrow and we will be here every day until this city and this state and this region rebuild bigger and better than ever before,” Pence said outside a damaged church.

Gasoline futures soared more than 13 percent on Thursday as almost a quarter of U.S. refining capacity had been knocked offline, raising fears of fuel shortages.

Moody’s Analytics estimated the economic cost from Harvey for southeastern Texas at $51 billion to $75 billion, ranking it among the costliest storms in American history.

The event has drawn comparisons with Hurricane Katrina, which killed more than 1,800 people in New Orleans in 2005. Then-President George W. Bush’s administration was criticized for its haphazard initial response to that storm, and Donald Trump’s administration was taking care to be seen as responding quickly to its first major natural disaster.

Trump was to return to the region on Saturday.

Early Thursday, explosions could be heard at a chemical plant in Crosby, Texas, owned by Arkema SA. Refrigeration systems failed in a truck storing volatile chemicals, which ignited as they warmed, sending smoke plumes 40-feet (12-meters) into the air, according to company and public safety officials.

Public safety officials insisted there was no risk to the public outside a 1.5-mile (2.4-km) safety perimeter, but more fires were expected at the facility, underscoring worries of possible damage at other petrochemical plants and oil refineries that dot the region.

As signs of normal life returned to Houston, the nation’s fourth most populous city, there were also concerns about health risks from bacteria and pollutants in floodwater.

The Houston Astros baseball team, forced to play away from the city due to the floods, will return and play at its home field on Saturday. It has invited shelter residents to attend its double header against the New York Mets, Houston Mayor Sylvester Turner said on his Twitter feed.

Residents began a massive cleanup, dragging water-logged furniture to the curb, hunting for supplies and repair estimates. The city began limited trash pickup and bus services. Hospitals that had struggled to stay open earlier in the week were phasing in clinical operations.

“We are blessed that the rain has stopped,” said Brenda Stardig of the Houston City Council.

Many in Houston were shocked at what they found when they returned home.

Anita Williams, 52, was lined up at a shelter at Houston’s George R. Brown Convention Center to register for aid from the Federal Emergency Management Agency. Williams went back to her home on Wednesday to survey the damage to her one-story house.

“It’s not my house anymore,” Williams said. “My deep freezer was in my living room.”

Erdogan says US indictment of his guards a ‘scandal’