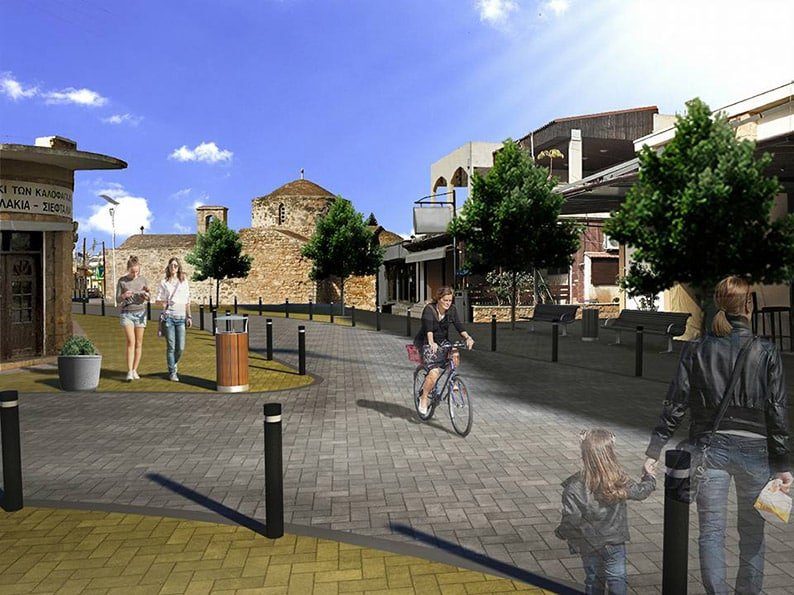 Artist's impression of the central part of Chlorakas

A NEW look Chlorakas is due to emerge in the coming months as an upgrading project in the Paphos village centre will get underway in a couple of weeks, according to the community leader.

Nikolas Liasides told the Cyprus Mail that the project comes with a €930,000 price tag, 30 per cent of which is being covered by Chlorakas community board and the remaining 70 per cent by the government that recently announced funding for major projects in the area.

President Nicos Anastasiades said in May that by the end of the year, 23 development projects costing €60m will have been completed in Paphos since 2015, while the Cyprus Mail had reported earlier in August that an area in Kato Paphos, close to Apostolos Pavlou- Saint Paul’s pillar, known locally as the ‘old fishing village’ of Kato Paphos will see upgrading work get underway by the end of the year.

Much of Chlorakas enjoys spectacular views to the Paphos coast and is a popular place to settle for foreign and local residents, as well as holidaying tourists.

The contracts for the project were signed by Liasides and Makis Savvides & Sons (Limassol) of M.S (Skyra) Vassas group of companies.

“The upgrading work will start in the centre of the village in two weeks’ time and will take nine months to complete. We are very pleased that this project is finally getting underway,” he said.

The concept has been on the table for around ten years, and due to the concerted efforts of Liasides and the current community board, they have managed to secure the green light.

The project will span Eleftherios Street in the centre of the village, which is around 150m long, and transform it with block paving, as well as part of the square in the area. All utilities, such as Cyta telecommunications cables and electricity supplies, will be placed underground giving the area a more open feel, he said.

The community leader noted that the upgrade will also beautify the area, enhancing its traditional feel, whilst also tidying it up. Trees and shrubs will be planted and new lighting installed.

He said: “This will be of a huge benefit to the centre as currently it’s disorganised. There is not much to do and not many people visit here. There isn’t a proper place for people to go and eat and we aim, with this upgrading, to encourage new businesses to open in the area, this will mean more tourist will visit rather than the handful that come to take photos at the church. It will also mean more locals.”

Liasides said that the village centre is currently only attracting older people that sit at the coffee shops and even they close early at around 8pm or 9pm. He noted that the work will ensure better visibility for the centre, and in one or two years, the community board plans to carry out the second phase of upgrading work which will include the roads running south of the church.

Looking forward, he said the community council would like to carry out many more improvements, including the creation of a museum, a centre for young people and also one for the elderly. Slowly, Chlorakas will open it up and it’s ‘face’ will totally change.

“We are happy about this project and it’s a big step for us, we will be leaving a legacy and a new look Chlorakas for the next one hundred years or so.”

Rush for golf resorts was flawed policy from the beginning

Spain out to reverse recent results against Italy