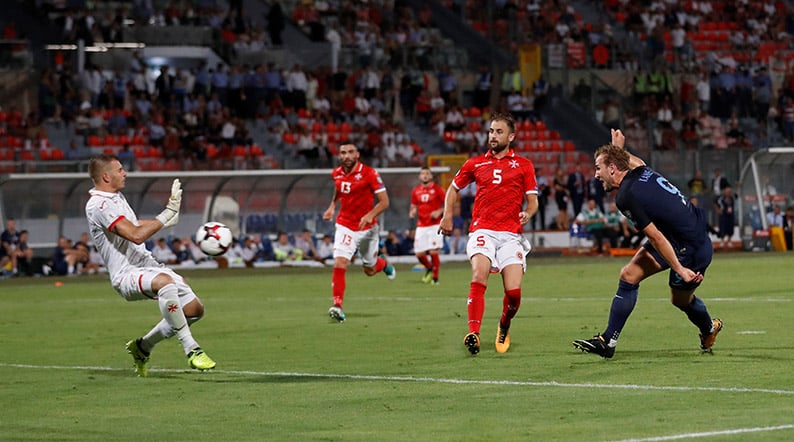 Three goals in the last six minutes disguised an uninspired England performance as they beat Malta 4-0 to stay firmly on course to qualify for next year’s World Cup finals.

Harry Kane’s 53rd-minute goal was all that separated England’s Premier League stars from Malta’s humble part-timers until a late flurry added gloss on the scoreline.

England stayed top of qualifying Group F with 17 points from seven games, two more than second-placed Slovakia who beat Slovenia and who travel to play England on Monday.

England were booed off by a large travelling army of fans at halftime having shown a complete lack of guile in trying to break down a well-disciplined Malta side who began the game bottom of the table with no points.

Such was the tedium that some fans even chanted the name of Wayne Rooney, England’s all-time leading scorer who recently announced his retirement from international football.

The mood was more cheery at the end although England will need to play better to avoid a slip against Slovakia at Wembley.

“We didn’t have that many clear cut chances, we knew at halftime we had to keep going and we would break them down eventually,” England captain Jordan Henderson said.

“There are positives to come out of it but plenty of room to improve it as well.”

On a sweaty night Raheem Sterling and Kane were denied by Malta keeper Andrew Hogg early on while Malta’s Ryan Fenech fired narrowly over in a rare attack for the hosts.

Hogg was barely tested for the rest of the half as England’s overwhelming possession amounted to precious little as Gareth Southgate’s players ran into cul-de-sacs.

England had a scare just after the interval when Andre Schembri’s well-struck shot flashed just past the post with keeper Joe Hart diving at full length.

Kane, without a goal for his club so far this season, finally eased England’s angst when he was picked out by Tottenham Hotspur team mate Dele Alli before shooting home.

Even with their noses in front England failed to find another gear and Malta occasionally threatened to embarrass their illustrious guests before Bertrand’s shot bounced in front of the diving Hogg and into the net.

Substitute Welbeck then poked in a second before Kane tapped in England’s fourth with Malta’s players expecting the ball to be kicked out to treat an injured player.