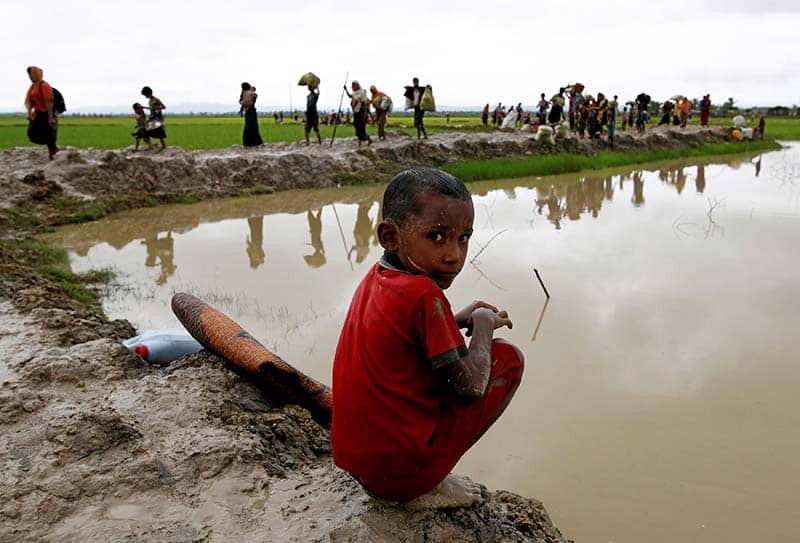 More than 2,600 houses have been burned down in Rohingya-majority areas of Myanmar’s northwest in the last week, the government said on Saturday, in one of the deadliest bouts of violence involving the Muslim minority in decades.

About 58,600 Rohingya have fled into neighbouring Bangladesh from Myanmar, according to U.N. refugee agency UNHCR, as aid workers there struggle to cope.

Myanmar officials blamed the Arakan Rohingya Salvation Army (ARSA) for the burning of the homes. The group claimed responsibility for coordinated attacks on security posts last week that prompted clashes and a large army counter-offensive.

But Rohingya fleeing to Bangladesh say a campaign of arson and killings by the Myanmar army is aimed at trying to force them out.

The treatment of Myanmar’s roughly 1.1 million Rohingya is the biggest challenge facing leader Aung San Suu Kyi, accused by Western critics of not speaking out for the Muslim minority that has long complained of persecution.

The clashes and army crackdown have killed nearly 400 people and more than 11,700 “ethnic residents” have been evacuated from the area, the government said, referring to the non-Muslim residents.

It marks a dramatic escalation of a conflict that has simmered since October, when a smaller Rohingya attack on security posts prompted a military response dogged by allegations of rights abuses.

“A total of 2,625 houses from Kotankauk, Myinlut and Kyikanpyin villages and two wards in Maungtaw were burned down by the ARSA extremist terrorists,” the state-run Global New Light of Myanmar said.

The group has been declared a terrorist organisation by the government.

“New satellite imagery shows the total destruction of a Muslim village, and prompts serious concerns that the level of devastation in northern Rakhine state may be far worse than originally thought,” said the group’s deputy Asia director, Phil Robertson.

Near the Naf river separating Myanmar and Bangladesh, new arrivals in Bangladesh carrying their belongings in sacks set up crude tents or tried to squeeze into available shelters or homes of locals.

“The existing camps are near full capacity and numbers are swelling fast. In the coming days there needs to be more space,” said UNHCR regional spokeswoman Vivian Tan, adding more refugees were expected.

Anastasiades says no connection between election and Cyprob efforts