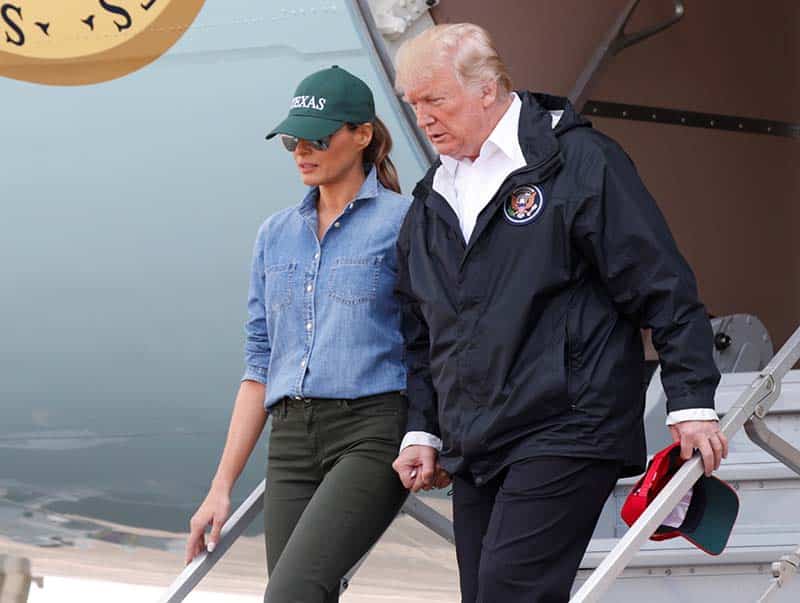 US President Donald Trump and first lady Melania Trump deplane after arriving at Ellington Field to meet with flood survivors and volunteers who assisted in relief efforts in the aftermath of Hurricane Harvey, in Houston, Texas

President Donald Trump arrived in Texas on Saturday to meet with emergency responders and victims of Harvey, the catastrophic storm that triggered severe flooding and presented his young administration with its most challenging domestic crisis.

Trump, dressed in a black jacket with no tie, landed at Ellington Field military base in Houston, accompanied by his wife Melania Trump, who wore a baseball cap emblazoned with the word “Texas,” trousers and casual canvas footwear.

The visit gives the president an opportunity to show a warm and empathetic side to victims of the worst storm to hit Texas in 50 years. Some have criticized him for staying clear of the disaster zone during a visit to the region on Tuesday, when he said he did not want to hamper rescue efforts.

The White House on Saturday said Trump would first travel to Houston to meet with flood survivors and volunteers who assisted in relief efforts and then move on to Lake Charles, Louisiana, an area hammered by the storm later in the week.

While Trump visits, attention will also turn to Minute Maid Park, where the Houston Astros play their first home baseball games since Harvey devastated the fourth-most populous U.S. city. The Saturday doubleheader with the New York Mets is expected to be wrought with emotion and punctuated with moments to honor the dozens who died as a result of Harvey.

The storm, one of the costliest to hit the United States, has displaced more than 1 million people, with 46 feared dead from flooding that paralyzed Houston, swelled river levels to record highs and knocked out the drinking water supply in Beaumont, Texas, a city of 120,000 people.

After Hurricane Harvey came ashore last Friday, much of the damage took place in the Houston metropolitan area, which has an economy about the same size as Argentina’s.

Seventy percent of Harris County, which encompasses Houston, at one point was covered with 18 inches (45 cm) or more of water, county officials said.

When Trump visited the Gulf of Mexico coastal region on Tuesday, he met with state and local leaders and first responders, largely focusing on the logistics of the government response rather than the suffering of residents.

The Trump administration in a letter to Congress on Friday asked for a $7.85 billion appropriation for response and initial recovery efforts. White House homeland security adviser Tom Bossert has said aid funding requests would come in stages as more became known about the impact of the storm.
Texas Governor Greg Abbott has said his state may need more than $125 billion.

The storm, which lingered around the Gulf Coast for days, dumped record amounts of rain and left devastation across more than 300 miles (480 km) of the state’s coast.

As water receded, many returned to survey the damage.

In Orange, Texas, about 125 miles (200 kms) east of Houston, Sam Dougharty, 36, returned on Friday where waist-high water remained in his backyard and barn.

His family’s house smelled like raw sewage and was still flooded to the ankles. A calf and a heifer from their herd of 15 were dead.

The area was slowly coming back to life, Orange County Sheriff Keith Merritt said on Saturday. But streets remained littered with flooded out vehicles and many homes were without power, he said.

Harvey came on the 12th anniversary of Hurricane Katrina, which killed about 1,800 around New Orleans. Then-U.S. President George W. Bush’s administration was roundly criticized for its botched early response to the storm.

Some of the tens of thousands of people forced into shelters by Harvey will attend the Astros game where Houston Mayor Sylvester Turner will throw out the first pitch and a moment of silence in planned for those who perished.

Sports have helped other cities rebound from catastrophe, such as when the New York Mets played the first baseball game in their damaged city 10 days after the attacks of Sept. 11, 2001.

In the Harris County area of Clear Creek, the nearly 50 inches (127 cm) of rain that fell there equated to a once in a 40,000 year event, said Jeff Lindner, meteorologist with the Harris County Flood Control District.

The storm shut about a fourth of U.S. refinery capacity, much of which is clustered along the Gulf Coast, and caused gasoline prices to spike to a two-year high ahead of the long Labor Day holiday weekend.

Meanwhile a new storm, Irma, had strengthened on Friday into a Category 3 hurricane on the five-step Saffir-Simpson scale. It remained hundreds of miles from land but was forecast to possibly hit Puerto Rico, the Dominican Republic and Haiti by the middle of next week.

Qataris refuse to be bowed by blockade