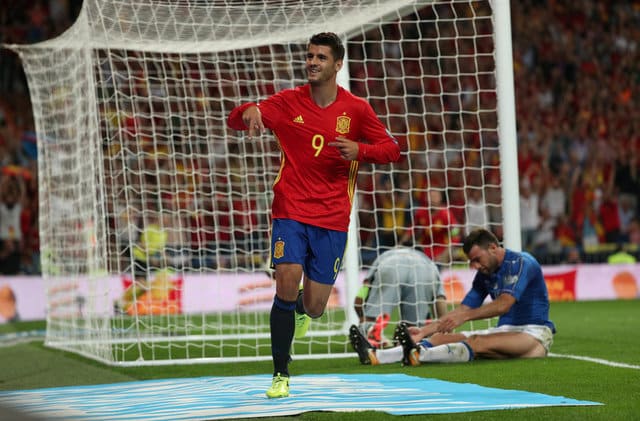 Two brilliant strikes from Isco and a late goal from Alvaro Morata gave Spain a spectacular 3-0 win over Italy, their nearest challengers in Group G, to move into the driving seat for automatic qualification to the 2018 World Cup.

Real Madrid attacking midfielder Isco, who was deployed in a “false nine” position as a deep-lying striker, curled a free kick beyond the reach of veteran Italy goalkeeper Gianluigi Buffon to put Spain ahead in the 13th minute.

Isco then received the ball on the edge of the area and danced past a defender before cracking a low shot into the near bottom corner which again proved too quick for Buffon five minutes before halftime.

Substitute Morata crafted a superb counter-attack with Sergio Ramos to start and finish the move for the third goal which he slotted past former Juventus team mate Buffon 13 minutes from time, rounding off Spain’s best performance against Italy since their 4-0 win in the Euro 2012 final.

“I’m very satisfied with the players’ response since I’ve been here, their mentality and commitment is excellent. Perfection doesn’t exist, but we played a great game tonight,” Spain coach Julen Lopetegui told reporters.

“You can always improve but it’s hard to ask how today. We understood the importance of the game, and we have to thank the fans for how they created an atmosphere like the ones we’ve seen in Paris and Wembley. We felt their presence.”

Spain top Group G on 19 points, three ahead of Italy and seven clear of Albania, who beat basement side Liechtenstein 2-0 on Saturday while Macedonia pulled off a surprise 1-0 victory at Israel.

The continued absence of top scorer Diego Costa and the explosive form of Marco Asensio compelled Lopetegui to imitate his predecessor Vicente del Bosque and play without a recognised striker, a move which paid off to perfection.

Isco may have given Spain their firepower but they created chances from all areas, with Dani Carvajal, Gerard Pique and Ramos all not far from scoring in the first half, while Italy’s only effort was a header from Andrea Belotti which David de Gea saved.

“Today there was a huge difference between the two teams’ level of quality and fitness, and when you consider those differences there’s no point talking about the result,” said Italy coach Gian Piero Ventura.

The coach would not criticise his captain Buffon for his slow reaction to Isco’s free-kick, and said Spain were a far more experienced side than his.

“Many of Spain’s players have played in three Champions League finals, there’s hardly anyone in our team on that level.”

Isco further delighted the 85,000 supporters in his home stadium with an outrageous nutmeg through the legs of Marco Verratti in the second half which nearly lead to Carvajal scoring.

The third goal came from ever reliable substitute Morata, who was denied a second late on by the offside flag.

Our View: The championing and protection of mediocrity is a scourge

‘Will to learn vital in tennis as well as in life,’ says Baghdatis