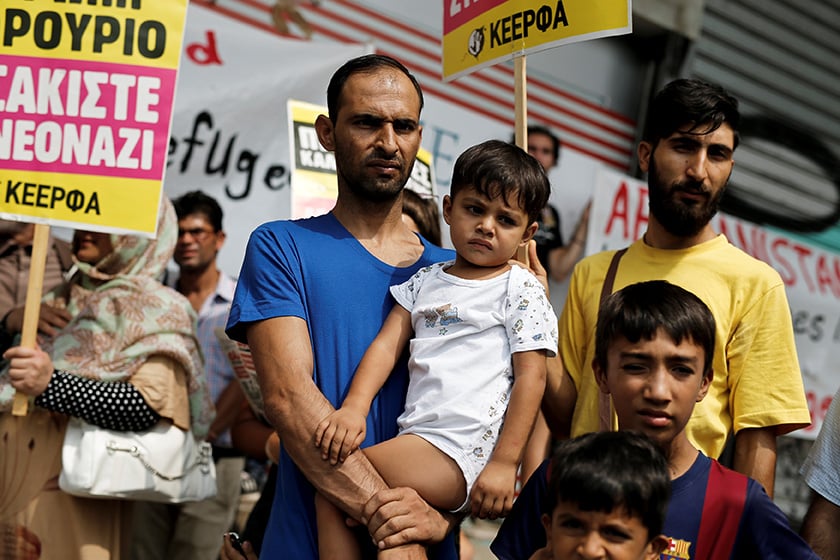 Because of circumstances beyond their control such as war, political or religious persecution and poverty, the common denominator for those unfortunate enough to be caught up in the refugee ‘experience’ is that they are forced to abandon their homes and livelihoods.

The stark reality of what this actually means is regularly broadcast on our television screens with graphic images of squalid camps in the Middle East, Turkey, Greece and elsewhere, as well as people being rescued from cramped rubber dinghies or drowned bodies being pulled from the sea like flotsam. The mass movement of people is nothing new, of course, and has a very long, very chequered history.

The first recorded migration is supposed to have occurred when our very own homo sapiens birth mother, together with her tribe, left east Africa and ventured north some 100,000 years or so ago. And we are her descendants. She and her companions were possibly economic migrants or perhaps were fleeing internecine warfare and could quite easily be classed in our modern parlance as refugees or else asylum seekers. We can only speculate.

Most of us are aware of the mass migrations of Goths, Huns, Ostrogoths, Vandals and others which hastened the demise of the Roman Empire. There were several reasons for this, but contributory factors were possibly climatic as well as agricultural and population pressures. I also suspect that as many of these so-called ‘barbarians’ had been recruited into the Roman army, they fancied a bit more of the ‘civilised’ Roman way of life and helped themselves to a slice of it. Sound familiar?

The most prolific movement of people occurred in America which began with a trickle from England as a result of religious persecution in the early 1600s, followed by surges in the early 1800s and from the 1880s until the early 1920s.

When countries embark on nation-building, such as the America of yesteryear, or in countries with labour shortages such as Britain and France after World War II, they welcomed refugees and economic migrants with open arms. But when it doesn’t suit, the shutters come down.

President Roosevelt reminded his fellow Americans that they weren’t to forget that they were all immigrants, but that clarion call has long fallen by the wayside with recent talk of wall-building and restrictions of movement of certain nationalities travelling to the ‘Land of the Free’.

In more recent times, Europe has seen more than its fair share of the forced movement of peoples: a million and a half Greeks and Turks had to abandon their homes and were subjected to infamous population exchanges after the Greco-Turkish war of 1919-1922;  the persecution of Jews in Germany and Austria in the 1930s with the Nazi regime ‘encouraging’ forced emigration; the uprooting after World War II of approximately 12 million ethnic Germans living in Czechoslovakia, Poland, Hungary and Romania. (This is a little-known event and has remained a historical footnote.) In the mid 1990s, Serbs, Croats and Bosnians suffered the same fate with population exchanges the result of conflict in the former Yugoslavia. All these horrendous events occurred because although people possessed the legal nationality of their country of residence, theirs was the ‘wrong’ religion or else they were an ethnic minority.

How should the above examples be classified, are some more worthy than others and why is it that on many an occasion those who suffer these upheavals are vilified and treated as pariahs?

I should reveal that I have a personal interest in this issue as I was forced to leave hearth and home as a result of the events in Cyprus during the summer of 1974. I’ve been pigeon-holed at different times and for different reasons into three categories: refugee, displaced person and economic migrant.

It’s often levelled at those on both sides of the Cypriot divide that they’re not refugees at all but displaced persons because they haven’t crossed an international boundary. Technically speaking that may well be the case but I suspect that those who use semantics in this way do so in order to dilute the status of those who’ve gone through this experience, thus making them somehow less ‘worthy’ of sympathy. The passage of time is also quoted with the jibe that as this event occurred such a long time ago, ‘you should have got over it by now’. Excuse me?

Try telling that to Greek Cypriots from the north who had to flee for their lives or Turkish Cypriots in the south herded into a football stadium not knowing what their ultimate fate might be. Or a Jew who had to leave Germany in 1938, a Sudeten German who was pushed out of Czechoslovakia in 1945, or a Syrian child who was barrel-bombed and forced to leave Aleppo last year.

Then, there’s this consensus among many that refugees receive far more than they’re entitled to and that they actually wear their status like a badge of honour, both of which couldn’t be further from the truth.

Many Greek and Turkish Cypriots went abroad and carved out new lives for themselves so are they economic migrants as well as refugees or, as some would prefer, displaced persons? When I initially came to Cyprus in 1970, I was in effect an economic migrant and when I returned to Britain in 1974, I became an economic migrant in reverse with the added ‘bonus’ of being a refugee. Whether or not someone has the ‘right’ bit of paper which allows them to reside in a particular country, as in my case because I have dual nationality, millions of us are in fact ‘economic migrants’ with many having the additional tag of ‘refugee’ thrown in for good measure.

The debate regarding the classification and ‘worthiness’ of the recent influx of people into Europe from Syria, Iraq, Afghanistan, Libya, Eritrea and sub-Saharan nations has been brought into sharp focus with emotions running high. Immigration was reportedly the principal concern of Brexit supporters in last year’s British referendum.

This is somewhat ironic to say the least because there are almost three million EU Johnny Foreigners already living in Britain with over two million of them working i.e. economic migrants. Isn’t Brexit therefore a case of shutting the stable door after the horse has bolted?

Having said that, perhaps their presence is acceptable because they’re predominately Caucasians. Historically, these new arrivals, be they refugees, economic migrants or whatever, will always be judged by the host nation according to whichever category they fall into as well as differences in religion or skin colour. These attitudes vary from country to country with some adopting a stance bordering on the overtly racist.

Imposing quotas and all manner of restrictions are not recent occurrences. When the Jews were fleeing Nazi Germany, they had great difficulty being allowed entry into other countries. Even though Britain accepted several thousand Jewish children in 1938, the Kindertransport, their parents were denied entry. And the British government considered this halfway house a sufficient act of ‘compassion’? The voyage of the St Louis in 1939 from Hamburg, with several hundred German Jews on board, emphasised their plight as they were persecuted at home and unwanted abroad. They were denied entry to Cuba and America and had to return, where for many of them the gas chambers awaited.

All refugees are equal but some are most definitely more equal than others. Perhaps there should be rather more ‘there but for the grace of God go I’ instead of what seems to be the all too familiar ‘I’m alright Jack’.