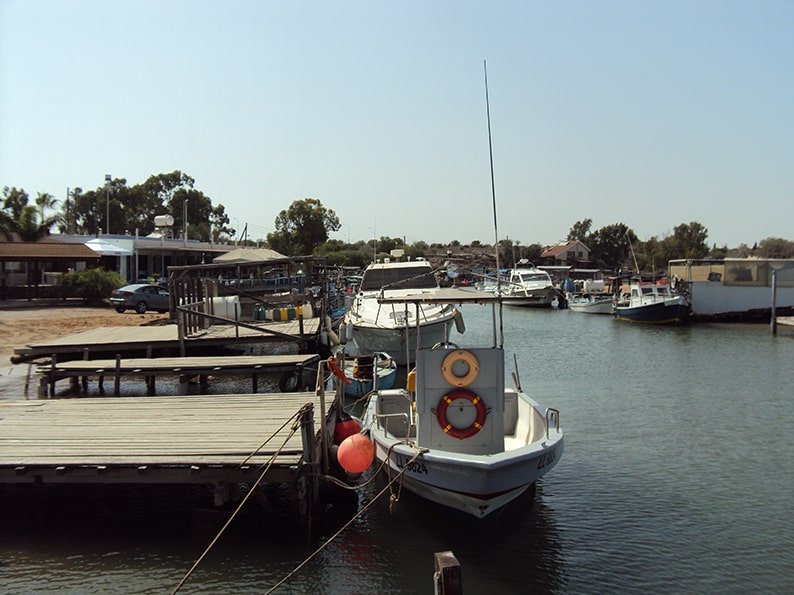 The disorganised berths in the central part of the river

Time has not been kind to the fishing harbour of Potamos Liopetriou near Ayia Napa. Poor practices, lack of funds and changes in land use down the decades have all taken their toll on the area which takes its name from the small Liopetri river which flows into the harbour.

Except now, the river rarely flows. It was never a year-round river, but the building of a dam further upstream to collect the water for farming irrigation means the river bed is now dry for months on end. As time went by the bed of the river, which is the harbour’s main attraction, has widened, mainly due to rock cutting around its banks. 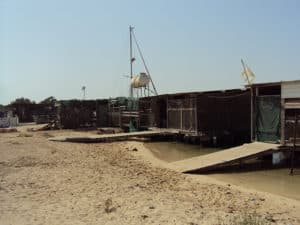 Liopetri still reserves its charm and remains a well-known place to visit. The harbours houses fishing boats and is used by both professional and amateur fishermen. The two restaurants on site have pleasant views and serve fresh fish straight from the catch, but no one can fail to notice the neglect. It is a messy, chaotic site, created and supported by individuals on an amateur level, with unsightly parts to it.

That, hopefully, is about to change. The community leader of nearby Liopetri, Kyriakos Trisokkas, has long wanted to enhance and improve the harbour. ‘’It has been the long wish of the people of Liopetri, to see Potamos being refurbished. We have beautiful childhood memories from the area, and we do not want to see it perish,’’ he told the Sunday Mail.

Liopetri community council first put in a request for improvement funds in 2011. After years of discussions, agreements with the government have finally been reached. Based on present planning, and if all goes well with the tender procedure, which is due to take place at the end of the year, the whole project will be completed by the end of 2020.

The goal is a complete transformation of the old river harbour to create a more attractive, better organised project, that will not only serve its current users, but also increase the number of visitors to the site and reinstate its presence as a local and national attraction.

A major priority is to avoid any damage to the surrounding natural environment, such as the forest area on the west part of the harbour. Trisokkas remembers when ‘’we would all go out to the area during the Whit Day and Green Monday celebrations and other events and would enjoy being next to the river and among the trees at the same time.

“In those days the forested area was much greater than it is now. Sadly, due to unorthodox methods of disposing of the debris taken from the base of the river in the surrounding area, most of the trees have been completely destroyed.’’

The council, he said, intends to reforest the whole area once the project is passed over to the local administration.

Environmental considerations feature in other ways too. Near the eastern bank of the river, is an EU Natura2000 protection zone, and information signs will be placed to inform visitors about the different types of birds which visit the area. At the same time, all farming in the area will be limited to biological practices, so as not to upset the natural balance of the environment.

Due to years of usage the river at its sea site has deepened, thus creating a problem upstream, since the water cannot reach far enough from the sea towards the land, making it inaccessible for many boats.

’’It is my wish that once the whole project is completed, to search for more funds to deepen the land side of the river also, so as to allow all boats to reach all the way and to make it that much more beautiful,’’ said Trisokkas.

The overall aim is a completely new development which maintains its traditional, natural look. Yet, certain vital infrastructure works will be necessary. The main road on the western side will be widened to accommodate electricity, water and sewer systems. A second road will be created on the eastern side to make use of the land that has been so far almost completely unused. A pedestrian bridge will cross over the river, connecting the two sides, thus unifying the resort and allowing more activity to take place.

The two existing restaurants are on the western bank. The plan is to build a third cafe-restaurant on the eastern bank of the river. Two main car parks, children’s playing ground, adult’s sports area, rowing training area, pedestrian ways, bicycle paths, gardens and shelters for visitors will also be included. An administration building will house an office, as well as a conference room. An information kiosk will be placed at the entrance together with a bicycle renting facility.

A canoe training facility will also be created at the outer part of the harbour together with an anchorage area for visiting cruise boats, which will be able to take visitors for mini cruises from Potamos to the surrounding areas, such as Ayia Napa and Protaras. A boat ramp together with its own parking area will also be created to make it easier for boats to load and unload.

A major attraction has always been the old chapel of Saint George at the end of the western area of the river, in what is considered a ‘national park’ of the Liopetri community. This will be protected together with the recently discovered, ancient Roman ruins found right next to chapel, within five plots of government land. It has been placed under the protection of the Antiquities Department.

With his eye on the 2020 finishing date Liopetri’s community leader is confident that once the project is completed all tourist agents will feature Liopetri in their brochures and.

“I believe that the visits to Potamos will be in thousands,’’ he said.

But Trisokkas harbours even greater ambitions.

“It is my dream to see a more complete project become reality, one that would unite Potamos with Ayia Napa, through a series of pedestrian and bicycle routes and finish all the way to the Kapparis area of Paralimni.’’

Still more to come from Pafos2017