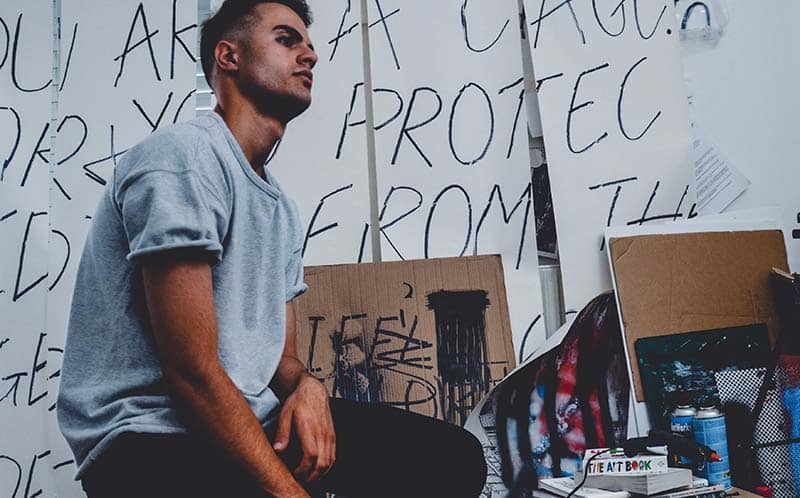 Loukis Menelaou in front of one of his works

It is more than safe to assume that not many 19-year-old artists have had their works exhibited for free at Nicosia’s famous Gloria Gallery. Loukis Menelaou is an exception.

The 28 works on display were inspired by his recently completed 13 months military service, most of which was spent in a guard post next to Nicosia’s green line, and his childhood growing up in the divided city.

Beyond the Threshold (September 4-12) focuses on what it means to be defined as Nicosian, exploring the invisible boundaries beyond the physical borders which surround us. By extension, Menelaou says, the works underline the need to acknowledge the mental boundaries Nicosians have imposed on themselves by the unwritten laws of society. The goal is to breach them and create a more open-minded outlook on the city in terms of race, social status and culture.

“My pictures are not for decoration in houses, they are to cause a reaction,” he told Living. “I want people to experience, not to be exposed. They are not pretty but as raw as possible because the situation in Nicosia is raw.”

Menelaou was born in Nicosia in October 1997. In 2016 he graduated from the GC School of Careers and began his military service in the national guard. Later this month he leaves for the UK to study architecture at University College London’s Bartlett School of Architecture.

Menelaou has always loved art  and his paintings and photographs have been exhibited before at school.

The theme of this exhibition was developed during his time in the army and all the exhibited works have been created this year.

He said that the location in Nicosia’s old city where he was posted made him question the polarities which can be glimpsed between the old and the new, the Turkish and Greek Cypriots and the unknown places within the buffer zone.

“For me this is the closing of a chapter, as I will be moving to the UK for my studies in September,” he added. “It is a summary of my personal memories and my life in Nicosia.”

Menelaou describes his work as sometimes very technical, while at other times he just expresses what he feels impulsively, leaving viewers free to make of his work what they will.

He makes frequent use of Lefkara lace, which he then sprays over. “It symbolises the old and the new, an old craft – which the older generation used to do – with modern street art, graffiti spraying,” the artist explained.

In some of his works blue and red predominate – a clear reference to the presence of both Greek Cypriots and Turkish Cypriots in the old city. Barrels – the quintessential symbol of the city’s dividing green line – also appear, as do buildings, some strong, others crumbling.

In short, it is not hard to see why gallery owner Gloria Kassianides was tempted to exhibit Menelaou’s works.

“He is a very talented artist,” she said. “And a young boy in the army at the start of his career. It is impressive that while he was being a soldier and not free he finds time to do what he wants. That should be supported.”

Southgate’s England under pressure to entertain