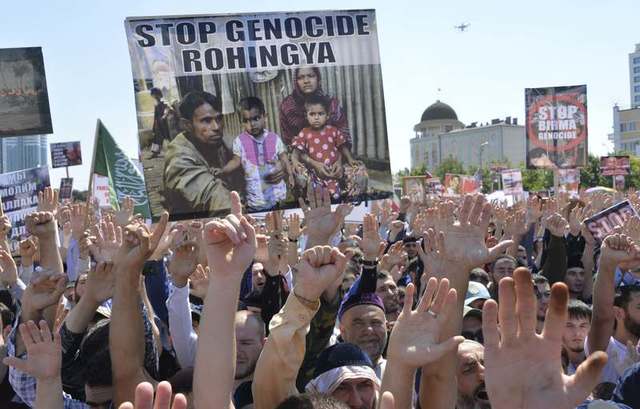 People take part in a rally in support of Muslim Rohingya following the recent violence, which erupted in Myanmar, in the Chechen capital Grozny, Russia September 4, 2017

Two blasts rocked an area on the Myanmar side of the border with Bangladesh on Monday, accompanied by the sound of gunfire and thick black smoke, as violence that has sent nearly 90,000 Muslim Rohingya fleeing to Bangladesh showed no sign of easing.

Bangladeshi border guards said a woman lost a leg from a blast about 50 metres inside Myanmar and was carried into Bangladesh to get treatment. Reuters reporters heard explosions and saw black smoke rising near a Myanmar village.

The latest violence in Myanmar’s northwestern Rakhine state began on August 25, when Rohingya insurgents attacked dozens of police posts and an army base. The ensuing clashes and a military counter-offensive have killed at least 400 people and triggered the exodus of villagers to Bangladesh.

A Rohingya refugee who went to the site of the blast – on a footpath near where civilians fleeing violence are huddled in no man’s land on the border – filmed what appeared to be a mine: a metal disc about 10 centimetres (3.94 inches) in diameter partially buried in the mud. He said he believed there were two more such devices buried in the ground.

Bangladeshi border guards said they believed the injured woman stepped on an anti-personnel mine, although that was not confirmed.

Two refugees also told Reuters they saw members of the Myanmar army around the site in the immediate period preceeding the blasts which occurred around 2:25 pm.

Reuters was unable to independently verify that the planted devices were landmines and that there was any link to the Myanmar army.

The spokesman for Myanmar’s national leader Aung San Suu Kyi, Zaw Htay, said that a clarification was needed to determine “where did it explode, who can go there and who laid those land mines. Who can surely say those mines were not laid by the terrorists?”

“There are so many questions. I would like to say that it is not solid news-writing if you write based on someone talking nonsense on the side of the road,” said Zaw Htay.

The treatment of Buddhist-majority Myanmar’s roughly 1.1 million Muslim Rohingya is the biggest challenge facing Suu Kyi, accused by Western critics of not speaking out for the minority that has long complained of persecution.

The Nobel Peace Prize laureate has come under increasing diplomatic pressure from countries with large Muslim populations such as Turkey and Pakistan to protect Rohingya civilians.

Myanmar says its security forces are fighting a legitimate campaign against “terrorists” responsible for a string of attacks on police posts and the army since last October.

On Monday, Reuters reporters saw fires and heard gunshots before the explosions near the Myanmar village of Taung Pyo Let Way.

‘NO FOOD … NO TREATMENT’

Myanmar officials blamed Rohingya militants for the burning of homes and civilian deaths but rights monitors and Rohingya fleeing to neighbouring Bangladesh say the Myanmar army is trying to force Rohingya out with a campaign of arson and killings.

The number of those crossing the border into Bangladesh – 87,000 – surpassed the number who escaped Myanmar after a series of much smaller insurgent attacks last October that set off a military operation. That operation has led to accusations of serious human rights abuses.

The newest estimate, based on calculations by UN workers in the Bangladeshi border district of Cox’s Bazar, takes to about 174,000 the total number of Rohingya who have sought refuge in Bangladesh since October.

The new arrivals have strained aid agencies and communities already helping hundreds of thousands of refugees from previous spasms of violence in Myanmar.

“We are trying to build houses here, but there isn’t enough space,” said Mohammed Hussein, 25, who was still looking for a place to stay after fleeing Myanmar four days ago.

“No non-government organisations came here. We have no food. Some women gave birth on the roadside. Sick children have no treatment.”

Hundreds of Rohingya milled beside the road while others slung tarpaulins over bamboo frames to make shelters against the monsoon rain.

Among new arrivals, about 16,000 are school-age children and more than 5,000 are under the age of five who need vaccine coverage, aid workers said over the weekend.

Indonesian Foreign Minister Retno Marsudi met Suu Kyi and other officials in Myanmar on Monday, to urge a halt to the violence.

Suu Kyi’s office said Marsudi expressed the Indonesian government’s “support of the activities of the Myanmar government for the stability, peace and development of Rakhine state”.

They also discussed humanitarian aid and the two countries would collaborate for the development of the state, Suu Kyi’s office said without giving further details.

There were more anti-Myanmar protests in Jakarta on Monday.

Malala Yousafzai, the youngest winner of the Nobel Peace Prize, called on Suu Kyi to condemn the “shameful” treatment of the Rohingya, saying “the world is waiting” for her to speak out.

In addition to tens of thousands of Rohingya, more than 11,700 “ethnic residents” had been evacuated from northern Rakhine state, the Myanmar government has said, referring to non-Muslims.

The army said on Sunday Rohingya insurgents had set fire to monasteries, images of Buddha as well as schools and houses in the north of Rakhine state. It posted images of destroyed Buddha statues.