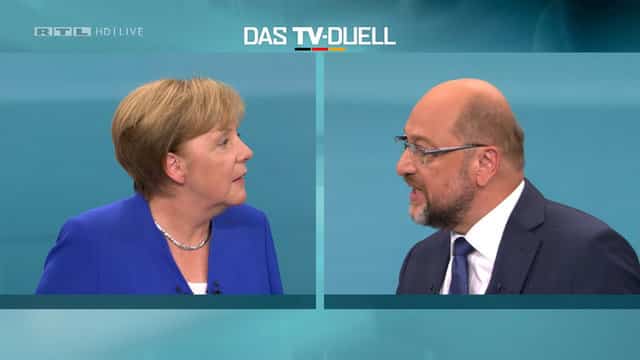 A mood of pre-election apathy rippled through German media on Monday, as commentators concluded Angela Merkel‘s rival for chancellor had blown his best chance of depriving her of fourth term in office.

With three weeks to go until polling day, several national newspapers taking stock the morning after a lacklustre two-way televised debate concluded that a re-run of the grand coalition of Merkel‘s conservatives and challenger Martin Schulz’s Social Democrats (SPD) was likely.

“Angela Merkel and Martin Schulz barely showed any differences in their only direct face-off. Why don’t we just set the grand coalition up again now?” magazine Der Spiegel said on its website, adding the debate would not have changed voters’ existing preferences.

That would be a continuation of the team that has governed Germany for the last four years.

But that combination has in the past been viewed as a last resort, and surveys suggest a three-way coalition between the conservatives, Greens and the Free Democrats (FDP) as an alternative option.

Polls over the past three months have consistently shown Merkel‘s conservatives holding a double-digit lead over the SPD – but the gap has never stretched so far as to give her CDU/CSU alliance a parliamentary majority.

Polls showed Merkel was also the winner of Sunday’s duel – a disappointment for Schulz, who had hoped he could use his only direct clash with her to turn his party’s fortunes around.

“We’re at risk of another grand coalition,” read the headline in mass-selling Bild newspaper.

It said while Schulz had tried to attack “the eternal chancellor”, he had done so with velvet gloves, pointing out that he often said he shared Merkel‘s opinion.

Bild said the pair had failed to differentiate themselves.

“There were two professional politicians speaking and you just couldn’t shake off the suspicion that both of them could work together in government without much friction,” it added.

‘SCHULZ DOESN’T WANT TO BE CHANCELLOR’

“It was supposed to be the first climax in the race for the chancellery … But substantive accents were missing. Undecided votes were likely unconvinced by either of the candidates,” it said.

The rivals’ body language was also telling, it said, with Schulz smiling a lot while Merkel often looked “as though she was witnessing something that she didn’t quite like.”

But Berlin’s Tagesspiegel newspaper said Schulz had scored points for taking more decisive positions on Turkey, pensions and the need to punish the German automotive industry for the diesel emissions scandal.

“When it came to showing hard edges, Martin Schulz was more convincing,” it said, adding, “this evening may have changed things.”