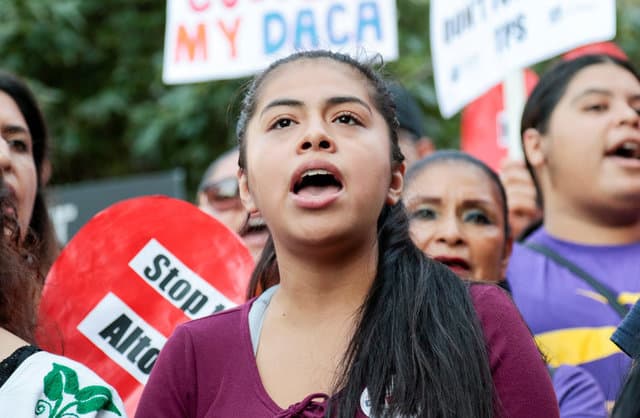 Rocio, a Deferred Action for Childhood Arrivals (Daca) programme recipient shouts with supporters during a rally outside the Federal Building in Los Angeles, California, US, September 1, 2017

President Donald Trump has decided to scrap a programme shielding from deportation immigrants who came to the United States illegally as children but will give Congress six months to craft legislation to replace it, sources familiar with the situation said.

The president decided to delay enforcement of his decision to end the Deferred Action for Childhood Arrivals, or Daca, the two sources said on Sunday. One source cautioned that the president could change his mind.

The decision to give Congress half a year to come up with a an alternative, first reported by Politico, represents a compromise of sorts after top Republicans and business leaders asked Trump to keep the programme.

Dreamers are a fraction of the estimated 11 million illegal immigrants in the United States, most of them Hispanic. Trump as a candidate promised to deport all of them, but many Americans have rallied to support the young adults who have spent large parts of their lives in the United States.

The decision, to be announced on Tuesday, will seek to placate both sides in the immigration debate at a time when the president is also grappling with North Korea’s nuclear program and Houston’s recovery from Hurricane Harvey.

As a candidate, Trump pledged to immediately scrap the programme but he ran into stiff opposition.

House of Representatives Speaker Paul Ryan urged Trump on Friday not to rescind the program and was joined by Senator Orrin Hatch, also a Republican.

Representative Ileana Ros-Lehtinen, a Cuban-American Republican from Florida tweeted her dismay with the decision to scrap Daca: “After teasing #Dreamers for months with talk of his ‘great heart,’ @POTUS slams door on them. Some ‘heart’.”

That said, Trump’s base will likely be far from happy about the president’s decision to leave open the option of a fix. Representative Steve King, a hawk on immigration and Iowa Republican, tweeted his opposition to the plan on Sunday night.

Democrats, like Senator Al Franken of Minnesota, also wanted the program to continue. Franken called the reported decision a “disgrace.”

Prior to the news of Trump’s action, Apple Inc CEO Tim Cook tweeted, “250 of my Apple coworkers are #Dreamers. I stand with them.”

But US Treasury Secretary Steven Mnuchin downplayed those warnings on Sunday, telling Fox News Sunday he was “less concerned about the economic impact.”

Most of the Dreamers came from Mexico and elsewhere in Latin America. More than 200,000 live in California, while 100,000 are in Texas. New York, Illinois and Florida also have large numbers.

Congress under presidents of both parties has been unable to pass comprehensive immigration reform. What to do about Dreamers has been actively debated within the White House and Trump administration. One senior administration official described the debate as a “tug of war” between factions.

Daca supporters argue that the people it protects grew up and are US educated and integrated into American society, with little connection to the countries in which they are citizens. Opponents of the program argue that illegal immigrants take jobs from US citizens.