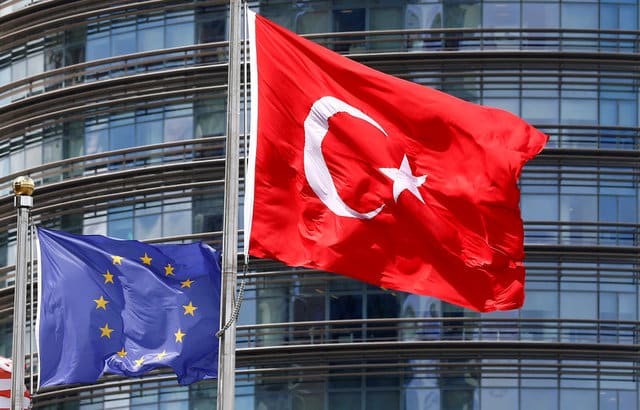 Germany sought to cool tempers over Turkey’s EU accession prospects on Monday after Chancellor Angela Merkel and her Social Democrat (SPD) rival both said in a TV debate the country had no place in Europe, drawing charges of populism from Ankara.

The Turkish Foreign Ministry, while making no direct threat to back out, reminded Germany of an agreement between Ankara and the EU that has stemmed a flood of migrants from conflict zones reaching Europe, not least Germany, via Turkey.

Merkel appeared bounced into sharpening her rhetoric on Turkey during Sunday’s debate when her main challenger Martin Schulz vowed to stop Ankara’s bid to join the EU if he were elected chancellor.

Merkel, who has been at odds with President Tayyip Erdogan on many fronts over the last year, at first rejected such a direct approach but returned to the matter later, saying “the fact is clear that Turkey should not become a member of the EU”.

“It is not a coincidence that our president Erdogan was the main topic of the debate,” he said, suggesting they were simply diverting attention from more serious political problems.

“Germany and Europe’s attacks on Turkey/Erdogan…are reflections of the narrowing of their horizons.”

Last month, Erdogan said Merkel’s Christian Democratic Union (CDU), Schulz’s SPD and the Greens were all “enemies of Turkey” and encouraged Turkish voters in Germany not to vote for them.

Merkel’s spokesman, Steffen Seibert, sought to take the heat out of the accession question on Monday, stressing that it was not a pressing matter for Berlin and would be discussed by EU leaders only at a summit in October.

“So the issue will only be up for debate after the Bundestag election,” he told a regular government news conference, referring to the Sept. 24 election at which Merkel is seeking a fourth term.

“The Chancellor’s words speak for themselves,” Seibert said.

Merkel, arguably the most influential politician in the European Union, promised during Sunday’s television debate to speak to other EU leaders “so that we can end these accession talks.”

Seibert, softening her remarks, said Turkey was not ready to join the EU – for now; a formulation that would be accepted even by those backing eventual Turkish accession.

“At the moment, Turkey is not at all in a position to join the European Union,” he said. “In fact, the negotiations are dormant at the moment.”

In Brussels, a spokesman for the European Commission said: “Turkey is taking giant strides away from Europe and that is making it impossible for Turkey to join the European Union, this is what we believe.”

EU foreign policy chief Federica Mogherini said: “Turkey… is still a candidate country. So we will continue talks … to define the future of our relationship.”

“We would like to remind the politicians who ran after us to save the EU from great chaos during the refugee crisis that not leaving the relations with Turkey in the hands of populism is important.”

Merkel’s opening of German borders to admit some one million migrants drew strong criticism from some. But she appears to have weathered the migrant crisis, with help from the Turkish-EU agreement, standing now some 14 points clear of Schulz in opinion polls. Home to some 3 million people of Turkish descent, Germany has traditionally had good relations with Turkey, a major trade partner. But ties between the NATO allies have deteriorated and Merkel’s CDU has long opposed Turkish EU membership.

The green light for membership talks was given months before Merkel became chancellor in 2005 and she had previously always said that she would respect that decision, referring to the negotiations as “open ended”.

Erdogan accuses Germany of harbouring plotters behind the 2016 coup attempt. Turkey has arrested 50,000 in a crackdown, including EU-Turkish citizens. Western politicians say the dragnet is a pretext for Erdogan to rid himself of his opponents.