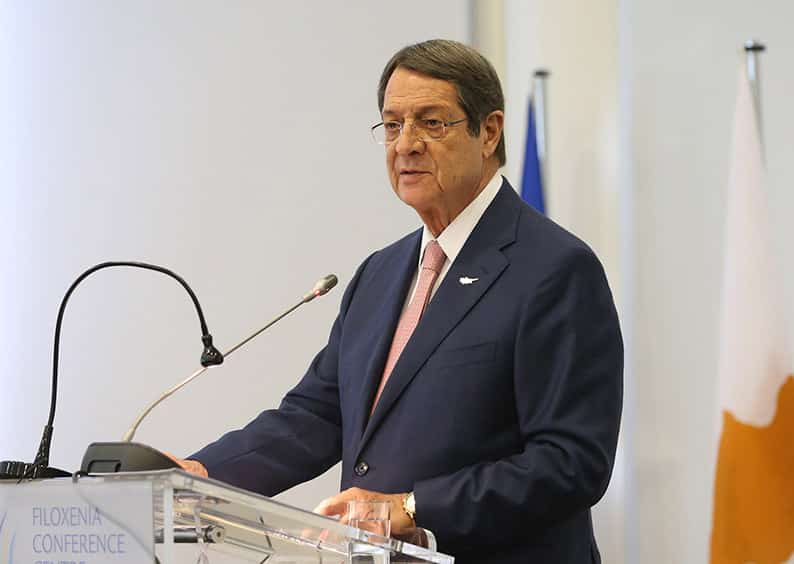 Presidential elections are set for the end of January

President Nicos Anastasiades on Monday said there should be no confusion between the constructive proposals submitted by UN Secretary-General Antonio Guterres in Crans-Montana, and

Turkey’s proposals which were exactly the opposite.

Anastasiades was speaking on the sidelines of an event in Nicosia where he was asked to comment on a report in Politis on Sunday which had gathered up information from various sources to try and paint a picture of how the talks collapsed on the evening of July 6.

The paper stated that Akel leader Andros Kyprianou, without quoting him, was well aware of what had happened at the Crans-Montana dinner, but attributed to him a remark that Guterres had been upset with Anastasiades that evening.

The president said on Monday he had not read the report but he wondered how Politis had obtained the information.

“I always acted within the diplomatic norms and maintained a principled stance on issues that were of vital significance for the people of Cyprus.”

Asked if during his private meeting with Guterres, the latter had conveyed the position that Turkey was ready to show flexibility on dropping the guarantee system, Anastasiades said: “No, he did not because the agreement was not between myself and the SG but between the Republic of Cyprus, the guarantor powers and mainly Turkey.
“It is not a matter of what the SG was proposing to the Turkish side. What is important is the stance maintained by Turkey.”

He said Guterres had referred to the number of Turkish soldiers that could remain under a settlement, which would be 650 as per the Treaty of Alliance. However, Turkey demanded that this number be 1,800, the president said.
“The good intentions of the SG are one thing, the real intentions of Turkey are another,” he added.
Asked if the problem was to replace the Treaty of Guarantees and the Treaty of Alliance with a new treaty of implementation of a solution by the UN, President Anastasiades replied “no”.

He said the proposal was to replace them with another credible system, bearing in mind Cyprus’ status as an international member of the UN, the EU and other organisations.
Anastasiades said Turkey wanted the renaming of the two 1960 treaties with implementation treaties granting it a one-sided right to intervene.
“It is one thing what the SG was proposing and promoting and another what Turkey was ready to accept. End of story. Let us not confuse the constructive proposals of the SG with the completely contrary positions of Turkey,” he said.
According to the Politis article when Guterres had his private meeting with Anastasiades, following the one he had with the Turkish foreign minister who had indicated that Ankara could show some flexibility on the issue, he told this to Anastasiades.

The paper said that according to its information, Anastasiades said he did not believe Turkey would abolish the Treaty of Guarantee and that he could not accept troops remaining on what would effectively be a Turkish base in an independent country.

It added that Guterres told him it was worth discussing to at first achieve the abolition of the guarantees as a first stage and then debate the troops issue.

Anastasiades then put the “zero troops, zero guarantees” red line on the table, it said, “and the UN chief commented nervously that this was not a starting point for negotiations”.

In a separate interview on Monday, Anastasiades confirmed reports last month that he would be sending a letter to Guterres expressing the Greek Cypriot side’s willingness to return to the talks.

At the same time, he said it was not his intention to resume another international conference on Cyprus without the proper preparation in order to avoid a new deadlock. Some of the political parties complained that he had not discussed this with the National Council.

Asked if he would be a candidate in next year’s presidential elections, for which he has not yet announced, Anastasiades said it was something he was thinking about.

MPs need to get serious about judicial reforms, Drakou says