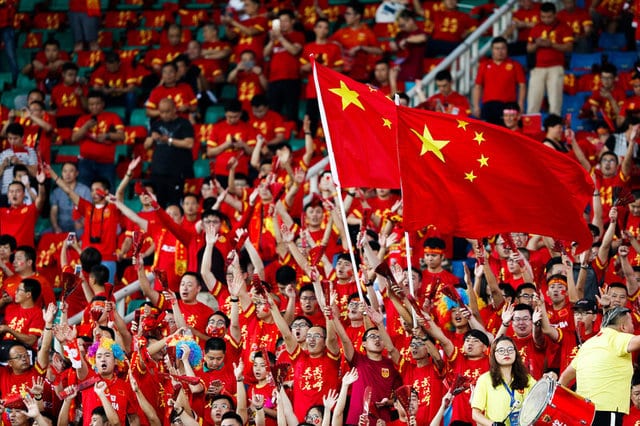 For a nation with ambitions to be a major power within the game, there were positives to be gleaned as well as a sense of what might have been as China's campaign ended with a 2-1 win over 2022 World Cup hosts Qatar.

China’s exit from the 2018 World Cup qualifying had been signposted for months but when it was finally confirmed on Tuesday, Marcello Lippi’s team departed with the battered pride of the country’s footballing reputation all but restored.

For a nation with ambitions to be a major power within the game, there were positives to be gleaned as well as a sense of what might have been as their campaign ended with a 2-1 win over 2022 World Cup hosts Qatar.

Lippi’s men were a goal behind and down to 10 men but battled back to a victory, thanks to strikes from Xiao Zhi and Wu Lei. The side missed out on a place in the playoffs by a solitary point.

The win was the team’s third in a five-game run that saw China lose just once – to eventual group winners Iran in Tehran.

“Now, looking back we deserved a win in the game against Qatar as we hit the woodwork three times, and their goalkeeper was also outstanding,” World Cup-winner Lippi said of a 0-0 draw with the Gulf side in Kunming in November, which was his debut as China coach.

“And also there was the match against Syria where we were leading until the last minute. We lost four points in these two matches. If we had them, we would have qualified as the second in the pool.”

The draw with the Syrians came in June when Ahmad Al Salih’s injury time free kick earned Ayman Hakeem’s team a vital point that gave them third spot in the group and set up a play-off against Australia.

That the Italian could point to specific incidents in a pair of matches rather than lamenting a general malaise within Chinese football showed how far forward he has taken the team.

Prior to Lippi’s arrival as Gao Hongbo’s replacement in November last year, the national side was in the doldrums.

China’s one and only appearance at the World Cup came in 2002 and, since reaching the final of the Asian Cup in 2004, the country has been in danger of slipping into footballing irrelevance.

The recent boom in spending by Chinese Super League clubs brought the sport back to prominence but despite that the national team continued to limp along.

China narrowly secured a place in the final phase of Asia’s qualifying tournament for the World Cup – the first time that had been achieved since 2002 – but with only one point from their opening four games under Gao, qualification hopes were all but gone before the Italian arrived.

Ten points from the next six games, however, left Chinese fans asking what might have happened had Lippi taken over sooner, although the 69-year-old has no time for hypotheticals.

“There are no ‘what ifs’ in football,” he said.

“What we have witnessed is the improvement of the Chinese team, both in quality and points. You could tell from this match.

“When I took over we had almost no hope of qualifying at all…. but we fought until the end and I hope we keep improving so we can have a good result at the Asian Cup.”

Catalonia parliament votes for referendum on split from Spain