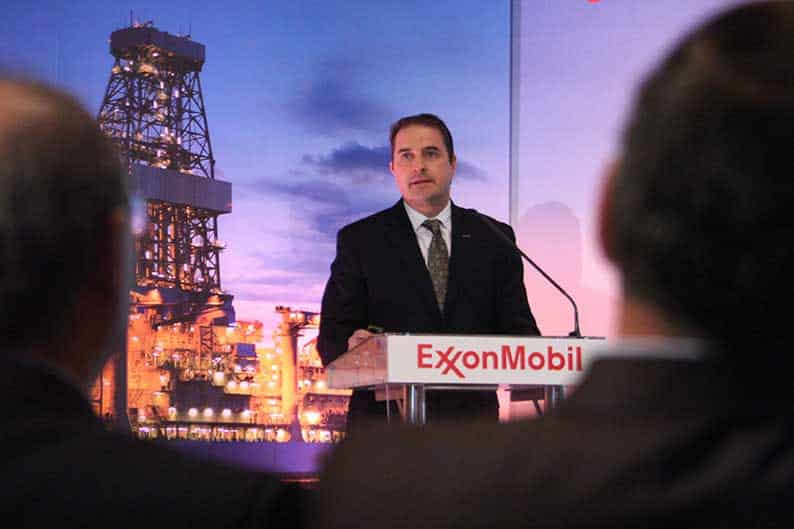 Two drillings are planned by ExxonMobil in Cyprus’ exclusive economic zone (EEZ) in the second half of 2018, the energy giant said on Wednesday.

At a presentation with Energy Minister Giorgos Lakkotrypis in Nicosia, ExxonMobil’s vice president for Europe, Russia, and the Caspian, Tristan Aspray said currently, the geophysical data was being finalised, while drilling contracts and shaft design are in progress.

ExxonMobil and Qatar Petroleum filed the winning bid for block 10 in the island’s third oil and gas round.

Aspray said 3D seismic data acquisition had been completed, drilling rig contracting and well planning were in progress and shorebase, supply vessels, offshore transportation and other related services were researched, and in the process of contracting.

He also said local ExxonMobil staff had been assigned for exploration and that the company was working with the government to develop local capabilities through training, internships, scholarships and support for equipment purchases.

“Operations for two exploration wells are targeted to begin in the second half of 2018 and future steps are dependent on exploration results,” he said. He did not rule out the possibility, if the data allows, that the company might participate in the construction of a LNG terminal in Cyprus.
Cyprus announced the third round last year, after the discovery of Zohr, a mammoth gas find off the coast of Egypt, which reinvigorated interest in the eastern Mediterranean.

Referring to the proximity of parts of Cyprus’ EEZ to Zohr, Aspray said there were significant exploration possibilities.

However, he said there is “still considerable uncertainty about drilling results, as geology can change significantly over short distances”.

Aspray said the Block 10 project would bring income and jobs and stimulate the economy, plus add to skills’ development. He also said that the company sees its cooperation with Cyprus as the beginning of long-term cooperation.

Referring to the advantages of Cyprus, he said the island had a clear vision for its hydrocarbons resources, while the company could offer its worldwide experience in major international projects, technology, access to the global market, financial capability and staffing. Qatar Petroleum has the largest ships for gas transportation and the country was the world’s largest exporter of natural gas, he added.
Lakkotrypis, in his address said the Cyprus government recognised the strategic importance of the presence of ExxonMobil and Qatar Petroleum in the island’s EEZ.
Also on Wednesday, reports emerged that Turkey had issued two new Navtex notifications to carry out explorations within Cyprus EEZ, 30 nautical miles southwest of Paphos, covering 1,500 square miles.

The successful conclusion of talks with ExxonMobil and Qatar Petroleum, has been seen as strengthening Cyprus’ access to the US administration given that former ExxonMobil top executive Rex Tillerson is Secretary of State.

US interests in the area, as well as those of France and of the UK via Royal Dutch Shell which is partner with Noble in Block 12 Aphrodite field, is seen as a deterrent to Turkish actions. Ankara opposes Cyprus’s oil and gas exploration with the Cyprus problem remaining unsolved and claims a large chunk of the Cypriot EEZ for itself.