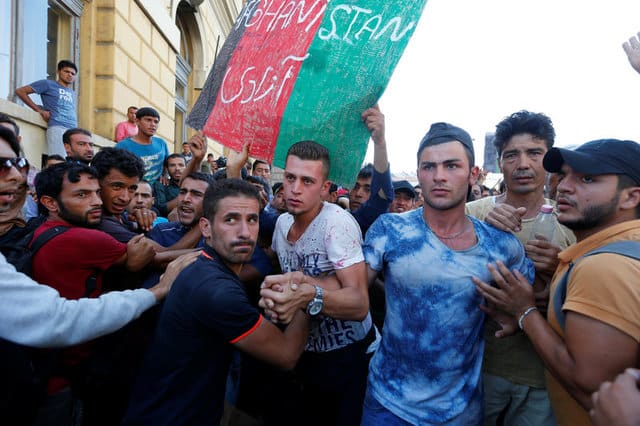 File photo: A group of migrants try to make their way through the crowd to the Keleti Railway station in Budapest

“It simply cannot be that states lose their right to self-determination and decision-making when it comes to receiving (asylum-seekers),” Strache said in a panel discussion in Vienna.

The European Court of Justice (ECJ) dismissed complaints by Hungary and Slovakia against the quota system on Wednesday. The European Commission said it might seek fines at the ECJ within weeks for Hungary, Poland and the Czech Republic unless they take people from Italy and Greece.

“The (EU) programme is not a refugee programme but an immigration programme,” said Strache, who has repeatedly called for “zero and minus immigration”.

“The UN Special Representative pointed out the war in Syria is over,” Strache said.

“We all know, asylum is a temporary protection, which applies for as long as there is persecution. But if that’s no longer the case, one actually has to take care of going back home.”

The Freedom Party’s popularity rose to a high during Europe’s migration crisis in 2015, when it denounced the government’s decision to open Austria’s borders to hundreds of thousands of migrants.

It led polls for more than a year, until Sebastian Kurz took the helm of the conservative People’s Party in May.

Kurz, who also has a hard stance on migration, has been leading polls ahead of the Oct 15 election with just over 30 per cent. The Freedom Party and centre-left Social Democrats trail with around 25 per cent each.

Austria’s system of proportional representation is likely to produce another coalition government, and observers say Kurz’s and Strache’s parties are likely to join forces.

Presidential elections to take place on January 28 and February 4