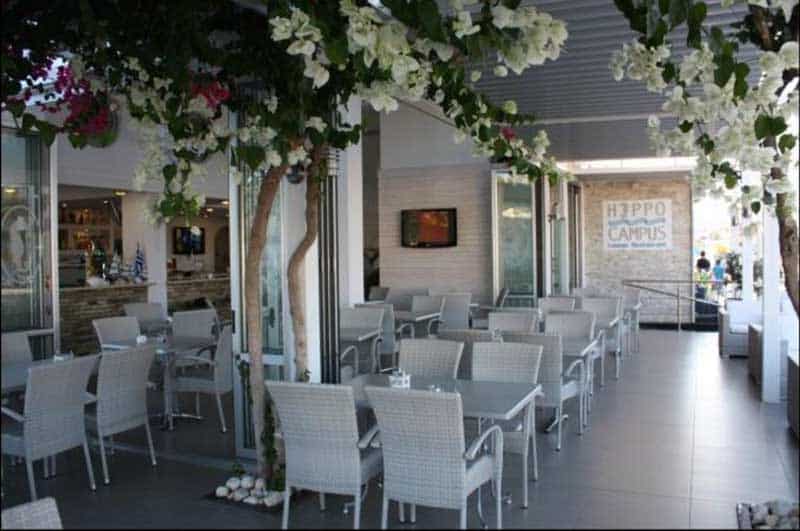 Trying to get the most out of what is left of the summer holidays, a day trip to Protaras was definitely in order. And while there I received a message from a friend to try Hippocampus, so off we went.

Located along the main tourist strip, Hippocampus has a modern look. The spotless, white colours that decorate the restaurant draw you towards it and give the impression of a clean, sophisticated environment.

We were welcomed with a smile. I noticed the restaurant was advertising 30 years of experience – and even incorporated it into their Wi-Fi password! – so I was expecting the food to be of a high quality.

We were promptly given menus and were most definitely spoilt for choice! As I was about to open the menu I noticed a pizza arrive at another table. The melted cheese as a slice was taken was a tempting, appetizing and satisfying sight. I couldn’t wait to open the menu to see what else was on offer.

The menu had so much to choose from, almost too much! I wanted the pizza, the pork chop, the burger, pasta. The specialities also drew my attention. I was actually a little overwhelmed! After changing my mind several times I finally settled on the pork chop while my dining partner went for the Jack Daniels burger.
Generally speaking, it saddens me when I go out to eat and see children sat at the table watching a movie or playing on a tablet. Due to this, I was pleased when I noticed that Hippocampus had a brilliant play area for children. An open space with well-maintained grass had a climbing frame, slides and a little house to keep children actively occupied.

Soon after ordering our drinks arrived. I went for the boring option of beer while my dining partner chose a cocktail. While not served in a glass you’d expect a cocktail to arrive in, I knew it was well made as I heard an ‘mmmm’ after just one small sip.

When the food came, we were extremely pleased. The pork chop was huge, covered in a tasty sauce, served with wedges and half a grilled red bell pepper. The burger arrived on a wooden board, also served with crispy wedges, Jack Daniels sauce in a small pot on the side and a small salad.

My knife glided through the pork. It was tender and cooked to perfection. The succulent chop’s flavour was well complemented by the sauce and the generous serving of wedges was just the right size. Not so big that they were dry and not too small that they could be overcooked. The burger was thick and juicy. The bacon in the burger was plentiful and not fatty. The sauce on the side was enough to put in the burger, if you so desire, and have some left to dip the wedges in. We were both thoroughly enjoyed our food. Even though we struggled to finish we were determined to do so as everything was so good.

One thing that didn’t sit so well was that the cleaner chose the moment we were eating to come and sweep and mop around our table. We found this quite bizarre as there were other areas of the restaurant that were empty.

However, I’m sure that this isn’t a constant occurrence and didn’t put us off discussing what we would choose from the menu on our next visit.

Just as we had finished, we spotted a huge cheese cake bowl making its way to another table. Alas, we were too full to order dessert, especially one of such a size.

Judging from what we had just eaten, we were sure it would taste just as good as it looked.

I’m definitely going back to Hippocampus.