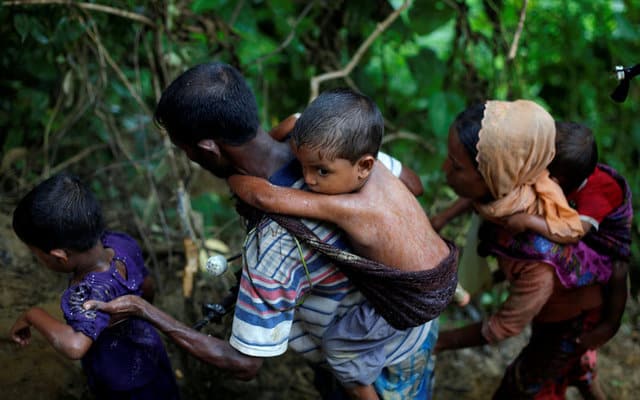 The Red Cross organisations are scaling up operations in Myanmar’s violence-riven north-west, after the United Nations had to suspend activities there following government suggestions that its agency had supported Rohingya insurgents.

While the world has focused on Bangladesh, where some 290,000 Rohingya have fled an army crackdown on the militants in two weeks, a serious humanitarian crisis is also unfolding on the Myanmar side, aid workers say.

Thousands of displaced people have been stranded or left without food for weeks.

The flight of the Rohingya began on Aug 25 after Rohingya insurgents attacked police posts and an army base in Rakhine state. That triggered an army counter-offensive in which at least 400 people were killed, thousands of houses were burned, villages razed and vast swathes of land depopulated.

“The UN and INGOs have not been very welcome in Rakhine and…they are not able to operate and ensure the safety and security of their staff and volunteers,” said Joy Singhal of the International Federation of Red Cross and Red Crescent Societies (IFRC).

“In such an environment, the government has invited the Red Cross to assist them,” Singhal said.

Aid workers worry many Rohingya had been left without food since mid-July, when the World Food Programme (WFP), which had been providing food and cash assistance, was unable to operate.

The UN evacuated “non-critical” staff from the area after the government suggested the WFP and international aid groups supported the insurgents shortly after the attacks.

Joy said the government would have the role of “coordination and facilitation,” but the “assessment, aid delivery and implementation” would all be managed by the Red Cross.

The government said it would establish camps for internally displaced people, but the move could spark opposition from some humanitarian experts.

The UN objected to the creation of “camp-like” villages for the Rohingya in April, citing the risk of stoking tensions. The UN stressed the importance of allowing displaced people to return to their place of origin and livelihoods.

On Friday, the UN in Bangladesh found tens of thousands of refugees who had not been counted before, raising the count dramatically to 270,000 from some 164,000 the day before. On Saturday, that jumped by another 20,000 as the stream of hungry, traumatised and destitute people showed no signs of abating.

The wave of refugees has strained aid agencies already helping hundreds of thousands displaced by previous waves of violence in Myanmar.

Australia will provide up to $4.03 million in assistance, Foreign Minister Julie Bishop said on Saturday, adding the aid will be distributed in Bangladesh through agencies.

During an event, Najib, who has been an outspoken critic of the treatment of the Rohingya by Myanmar, said “the response by the Myanmar government has been rather disappointing.”

Many other countries with large Muslim populations, including Pakistan and Turkey, have expressed concern over the violence and called on leader Aung San Suu Kyi to act.

On Saturday, thousands of Rohingya were milling on the road near the camp of Kutapalong, carrying bamboo and black tarpaulin to build shacks. Children and women flocked to every stopping vehicle, extending their arms, begging.

Buddhist-majority Myanmar says its forces are fighting a legitimate campaign against “terrorists” it blames for the attacks on them and for burning homes and civilian deaths. It says about 30,000 non-Muslims have been displaced.

Amnesty International said it had confirmed that Myanmar military used landmines near the border with Bangladesh after Reuters first reported explosions and what Bangladeshi border guards said were injuries caused by anti-personnel mines.

The organization said the mines “have seriously injured at least three civilians, including two children, and reportedly killed one man in the past week,” citing eyewitnesses and analysis by its weapons experts.

Bangladesh lodged a protest on Wednesday after it also said Myanmar had laid mines near the border.

A Myanmar military source told Reuters mines were laid along the border in the 1990s to prevent trespassing and the military had since tried to remove them. But none had been planted recently.

The army has not commented on the blasts.

Zaw Htay, the spokesman for Suu Kyi, told Reuters on Monday that a clarification was needed to determine “where did it explode, who can go there and who laid those land mines. Who can surely say those mines were not laid by the terrorists?”

Fifita try sparks All Blacks to win over Pumas