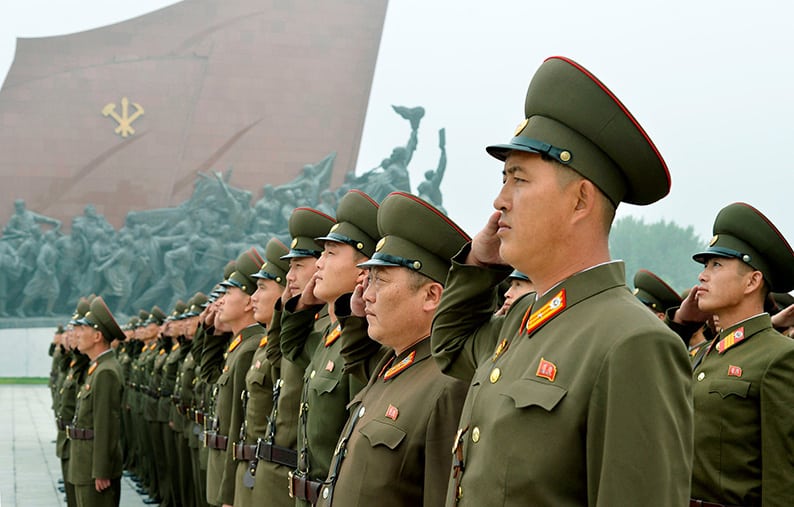 South Korea braced for a possible further missile test by North Korea as it marked its founding anniversary on Saturday, just days after its sixth and largest nuclear test rattled global financial markets and further escalated tensions in the region.

Throughout the week, South Korean officials have warned the North could launch another intercontinental ballistic missile, in defiance of U.N. sanctions and amid an escalating standoff with the United States.

Pyongyang marks its founding anniversary each year with a big display of pageantry and military hardware. Last year, North Korea conducted its fifth nuclear test on the September 9 anniversary.

Tension on the Korean peninsula has escalated as North Korea’s young leader, Kim Jong Un, has stepped up the development of weapons, testing a string of missiles this year, including one flying over Japan, and conducting its sixth nuclear test on Sunday.

Experts believe the isolated regime is close to its goal of developing a powerful nuclear weapon capable of reaching the United States, something U.S. President Donald Trump has vowed to prevent.

Celebrating its founding anniversary, a front-page editorial of the Saturday edition of North Korea’s official Rodong Sinmun said the country should make “more high-tech Juche weapons to continuously bring about big historical events such as a miraculous victory of July 28.”. The July date refers to the intercontinental ballistic missile test.

Juche is North Korea’s homegrown ideology of self-reliance that is a mix of Marxism and extreme nationalism preached by state founder Kim Il Sung, the current leader’s grandfather.

South Korean nuclear experts, checking for contamination, said on Friday they had found minute traces of radioactive xenon gas but that it was too early to link it to Sunday’s explosion.

The Nuclear Safety and Security Commission (NSSC) said it had been conducting tests on land, air and water samples since shortly after the North Korean nuclear test on Sunday.

Xenon is a naturally occurring, colourless gas that is used in manufacturing of some sorts of lights. But the NSSC said it had detected xenon-133, a radioactive isotope that does not occur naturally and which has in the past been linked to North Korea’s nuclear tests.

There was no chance the xenon “will have an impact on South Korea’s territory or population”, the agency said.

Trump has repeatedly said all options are on the table in dealing with North Korea and on Thursday said he would prefer not to use military action, but if he did, it would be a “very sad day” for North Korea.

“Military action would certainly be an option. Is it inevitable? Nothing is inevitable,” Trump told reporters. “If we do use it on North Korea, it will be a very sad day for North Korea.”

Even as Trump has insisted that now is not the time to talk, senior members of his administration have made clear that the door to a diplomatic solution is open, especially given the U.S. assessment that any pre-emptive strike would unleash massive North Korean retaliation.

North Korea says it needs its weapons to protect itself from U.S. aggression and regularly threatens to destroy the United States.

South Korea and the United States are technically still at war with North Korea after the 1950-53 Korean conflict ended with a truce, not a peace treaty.

The USS Ronald Reagan, a nuclear-powered carrier, left its home port in Japan for a routine autumn patrol of the Western Pacific, a Navy spokeswoman said. That area included waters between Japan and the Korean peninsula, she added, without giving any further details.

The Ronald Reagan was out on routine patrol from May until August, and was sent to the Sea of Japan with another carrier, the USS Carl Vinson, to take part in drills with Japan’s Self Defence Forces as well as the South Korean military.

North Korea vehemently objects to military exercises on or near the peninsula, and China and Russia have suggested the United States and South Korea halt their exercises to lower tension.

While Trump talked tough on North Korea, China agreed on Thursday that the United Nations should take more action against it, but it also pushed for dialogue.

The U.N. Security Council is expected to vote on a new set of sanctions soon. Russian Foreign Minister Sergei Lavrov said that it was too early to draw conclusions about the final form of the U.N. resolution, Russia’s Interfax news agency quoted Lavrov as saying at a news conference on Friday.

The United States on Friday told the U.N. Security Council that it intends to call a meeting on Monday to vote on a draft resolution establishing additional sanctions on North Korea for its missile and nuclear program, the U.S. Mission to the United Nations said in a statement.

U.S. ambassador to the United Nations Nikki Haley said last Monday that she intended to call for a vote on September 11 and then the United States circulated a draft resolution to the 15-member council on Wednesday.

The United States wants the Security Council to impose an oil embargo on North Korea, ban its exports of textiles and the hiring of North Korean laborers abroad, and to subject Kim Jong Un to an asset freeze and travel ban, according to a draft resolution seen by Reuters on Wednesday.

It was not immediately clear how North Korean allies China and Russia would vote, but a senior U.S. official on Friday night expressed skepticism that either nation would accept anything more stringent than a ban on imports of North Korean textiles.

Chinese officials have privately expressed fears that imposing an oil embargo could risk triggering massive instability in its neighbour.

“There is nothing more foolish than thinking we, a strong nuclear state, will endure this evil pressure aimed at overthrowing our state,” the North’s official news agency said in a commentary.

“Even if Nikki Haley is blind, she must use her mouth correctly. The United States administration will pay for not being able to control the mouth of their U.N. representative.”

China is by far North Korea’s biggest trading partner, accounting for 92 percent of two-way trade last year. It also provides hundreds of thousands of tonnes of oil and fuel to the impoverished regime.

China’s economic influence has been felt by South Korea as well. The two countries have been at loggerheads over South Korea’s decision to deploy a U.S. anti-missile system, the Terminal High Altitude Area Defense, which has a powerful radar that can probe deep into China.

The military section of China’s Global Times newspaper on Thursday referred to THAAD as “a malignant tumour”.