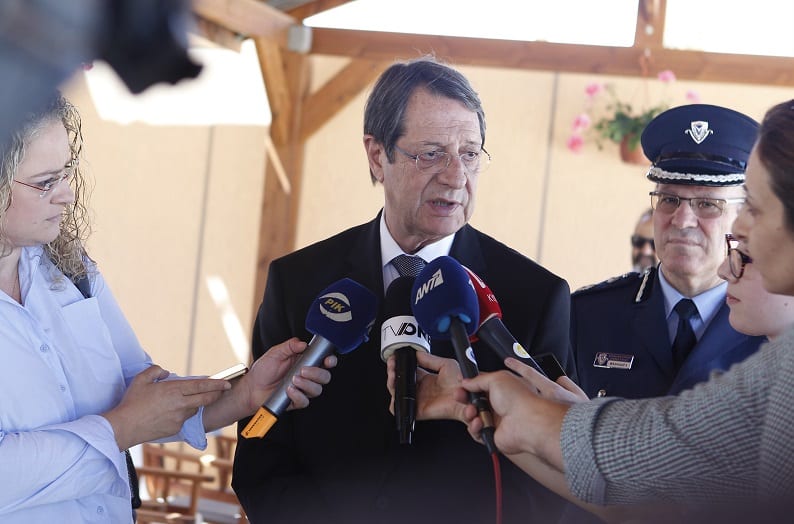 President Nicos Anastasiades on Sunday repeated his readiness to return to the negotiating table, provided that the fundamental preconditions set by the UN Secretary-General for the creation of a normal state were met by Turkey.

Speaking on the sidelines of an event at Episkopio village, in Nicosia district, the president was asked if he was expecting any developments after his meeting with the UNSG Antonio Guterres in New York on the sidelines of the UN General Assembly meeting later this month.

Anastasiades said at the meeting “we will express our readiness, provided everything that we have noted on the documents submitted are kept”.

Anastasiades said he has repeatedly stated through letters to EU leaders, the Islamic Conference, the permanent members of the UN Security Council and the SG that provided the fundamental prerequisites set out by Guterres himself regarding the creation of a normal state were implemented, “we would be ready to return to the negotiating table”.

“Therefore during the meeting, we will express our readiness provided the fundamental principles of the UN and the EU which are included in the documents we submitted, are kept to enable us to create a normal state,” he said.

Asked if there would be a meeting with Turkish Cypriot leader Mustafa Akinci in the presence of the Secretary-General, Anastasiades said any meeting that takes place “should have a purpose”.

“If and when the Turkish Cypriot side responds to our positions and the right preparation takes place, we will not say no to meeting with our compatriots.”

He added that a 30-month dialogue had taken place with the Turkish Cypriot side, so “it depends both on Mr Akinci and on those who define the lines that Mr Akinci is following, namely Turkey.”

Anastasiades also referred to a number of initiatives he would undertake through the international contacts he will have, either through bilateral or trilateral meetings.

Asked to comment on the notion that changes in the north inicated it was being rapidly assimilated or fully controlled by Turkey, the president said: “This is not a phenomenon observed after the collapse of the Crans Montana talks”, but Turkey’s firm pursuit.

Mosques had not been built overnight, after the collapse of Crans Montana, he said. “It is a focused and targeted pursuit by Turkey”.

Invited to comment on press reports that there is pessimism on the part of the government regarding the results of the exploratory drilling at Block 11 of the island’s Exclusive Economic Zone, Anastasiades said this was not the case.

He said Block 11 might not be satisfactory for exploitation however the reserves found were of the same composition as those located in Egypt’s Zohr field and this created some positivity.

Saturday’s edition of Phileleftheros newspaper said that no large natural gas discoveries were made at Onisiforos but that TOTAL/ENI consortium which are carrying out the drilling were satisfied as it as raises the chances to find other reserves.