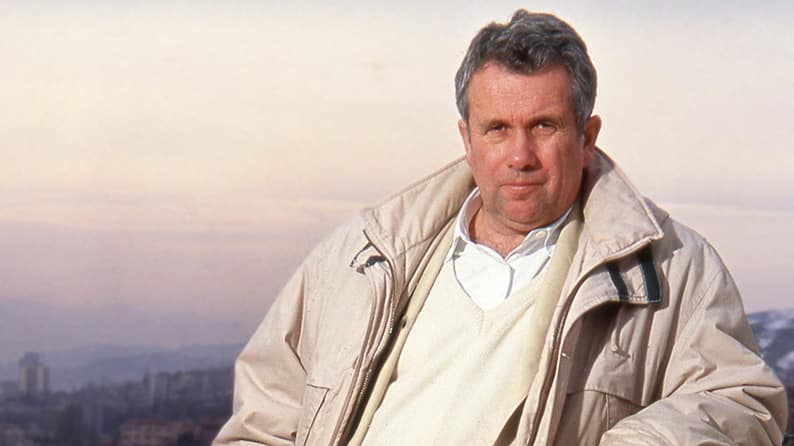 When Bell returns next year, he will be armed with little more than a travel guidebook and memories

RENOWNED television reporter Martin Bell is set to lead a group of history enthusiasts on a journey around Cyprus, in what could be a first for local tourism.

During the tour ‘A soldier’s tale of Cyprus’, the former journalist will share his personal recollections of the island and its turbulent struggle for independence.

“The tour is organised on the model of another tour that I have been leading, or at least accompanying, in the former Balkan war zones,” Bell explained in an interview with the Sunday Mail.

“The Cyprus conflict, of course, was much longer ago, and my role was very different.”

Although war tourism is not a new phenomenon, this is thought to be the first such excursion to be organised in Cyprus.

As a young conscript, Bell served with the Suffolk Regiment during the campaign against Eoka, which ended with the Zurich and London agreements and independence.

When Bell, 79, returns next year for the eight-day trip, he will be armed with little more than a travel guidebook and memories.

Many of the places he will visit – including the ruins at Salamis and Kourion – still remain instantly recognisable decades after the conflict.

“As far as I know it is the first tour of its kind, but I wish to emphasise that it is totally non-political,” he said.

“It makes no judgements – except on the British Army’s failures at the time, especially Operation Matchbox in July 1958. It is just an old soldier revisiting his past and trying to explain it.”

His experiences as a young conscript between 1957 and 1959 were recently documented in his book, The End of Empire, a memoir recounting his national service.

It was written after a chance discovery of a box in his attic which contained more than 100 letters that he had sent home to his family from Cyprus.

The letters provided a unique glimpse of the life as a conscript on active service, describing road blocks and cordons and searches, murders and explosions and riots – and a strategy of armed repression that ultimately failed.

Concern was repeatedly expressed by British soldiers about the dangers of ambushes. Although these were common, especially on rural roads, they were not a major worry for Bell.

“I do not remember being afraid of an Eoka ambush,” he said.

“I spent much of the time as a humble corporal, armed but in an unarmoured Land Rover, patrolling potential flash points between Greek and Turkish communities south of Nicosia.

“Our second-in-command had assured us that the Eoka rebels attacked only when they had the advantages of greater fire-power and numbers.”

The conflict caught the public imagination in Britain, and barely a day passed without reports on the situation in the leading daily newspapers.

When Bell left the army, he joined the BBC as a reporter and embarked on a career which took him from Vietnam, Nigeria, Angola, the Middle East and Northern Ireland.

He also served as the MP for Tatton between 1997 and 2001, unseating Neil Hamilton who was embroiled in “sleaze” allegations.

On his recent Balkan War Zone tours, he guided small groups through former flashpoints in Zagreb, Vukovar and Sarajevo and Dubrovnik.

“My emotions on revisiting Cyprus are a blend of wonderment at the beauty of the island and of sadness at what has befallen it,” he said.

Even though he has ‘no nostalgia’ for his years as a soldier, he was “influenced by Lawrence Durrell’s Bitter Lemons and fell in love with Cyprus at first sight”.

“How could I not? Nor am I in any sense an apologist for British policy or behaviour when the island was a colony. I have written critically of both.”

His book covers many of those criticisms.

Bell says his regiment were one of the “more disciplined units in an army”, but in his book, he tells the story of how the clock mysteriously went missing when the regiment searched Kykkos Monastery.

The incident occurred at the height of the Eoka campaign, when Greek Orthodox monasteries were believed by the colonial authorities to be centres of sedition.

“The British Army even issued its soldiers with a monastery map. In September 1958 D Company of the Suffolk Regiment searched Kykko Monastery where Archbishop Makarios had trained for the priesthood,” Bell explained.

“That evening the army received a complaint from the Orthodox Church that the archbishop’s grandfather clock was missing.

“One of the officers protested that so large an object could not possibly have gone missing. But he took the precaution of visiting the Company Lines (the tents where the soldiers lived). He found them reassembling the clock. It was then disposed of in the DTLs (deep trench latrines).”

Most of Bell’s criticisms of British policy are far more serious. One concerns Lieutenant Colonel Arthur Campbell, from the Suffolk regiment, who was commissioned by the then governor, William Harding, to write a book about the campaign. Flaming Cassock was quickly suppressed by the British authorities.

“Governor Harding commissioned him to write a history of the Cyprus campaign, which Harding thought he was winning. By the time the book was complete Harding had been replaced by governor Hugh Foot, who was not a soldier but a diplomat.”

Bell used the Freedom of Information Act to rescue it from oblivion, calling it ‘buried treasure’.

“He (Foot) ordered the total suppression of the book, on the grounds that it would impede a settlement,” said Bell.

Using documents only declassified in 2013, Bell’s book also exposes a cover-up by the colonial government of the circumstances leading to the June 12, 1958 Geunyeli massacre, one of the most notorious instances of inter-communal violence.

A patrol of the Royal Horse Guards (RHG) came upon a group of 35 Greek Cypriot men from Kondemenos hiding in a ditch near the Turkish Cypriot quarter of Skylloura.

“There had been riots in Nicosia that day and it was not thought possible to charge them and bring them to the central police station. Instead the squadron commander was instructed to take them to a suitable place and tell them to walk home,” Bell explained.

He chose open ground near Geunyeli, which was Turkish, and the RHG set up a road block to prevent their pursuit from there, but on their way home they were ambushed by other Turks Cypriots. Eight were killed and five were seriously injured.

The governor then ordered a Commission of Inquiry conducted by the Chief Justice of Cyprus Sir Paget Bourke.

“He concluded that the course adopted by the military was ‘unimaginative and ill considered’. He was put under pressure by the Colonial Office to change this judgement. He refused to do so, but agreed that these conclusions should not appear in the published report because they were not findings but opinions.”

Those taking Bell’s tour, which is organised by Prestige Holidays, will stop off at the Archaeological Museum, St John’s Cathedral, Wayne’s Keep Memorial, Paphos and Kyrenia Castle.

“I expect the people travelling with me to be predominantly British, elderly, open minded and well informed,” said Bell.

Bell says his time in the National Service was “on the sunny side of tolerable” and that his two years in the Suffolk Regiment were the best education he ever had. 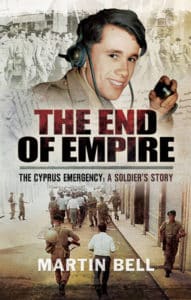 The End of Empire: Cyprus: A Soldier’s Story By Martin Bell, Available from Amazon (19.99 pounds)

Refugees in our brave new world