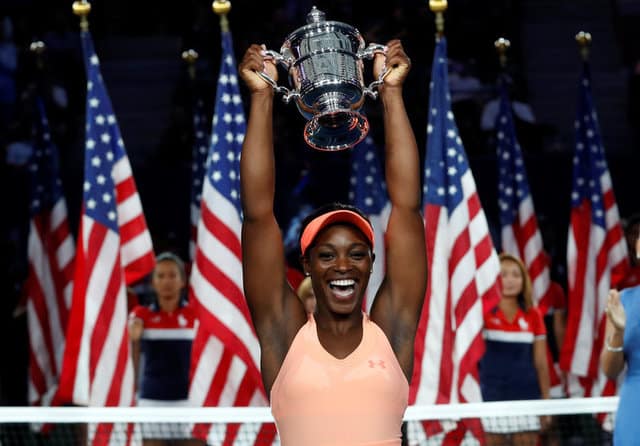 Sloane Stephens stayed composed throughout the U.S. Open final, playing near-perfect tennis to win her maiden grand slam title with a 6-3 6-0 victory against Madison Keys as the future of American women’s tennis seemed assured on Saturday.

The 24-year-old, back this summer from almost a year off the courts because of a foot injury, was never in trouble as her defensive play derailed the 15th-seeded Keys, who was playing with a heavily bandaged right thigh.

“It’s incredible. I honestly had surgery Jan 23 and if someone had told me I’d win the U.S. Open I would have said it’s impossible,” said the unseeded Stephens who, after celebrating, sat down and chatted with Keys.

“Madi is one of my best friends on tour and to play her here, I wouldn’t have wanted to play anyone else. I told her I wish it could be a draw and if it was the other way around she’d do the same. To stand here with her today is incredible, that’s what real friendship is.”

Keys noted, “Sloane is truly one of my favourite people and to get to play her was really special. Obviously I didn’t play my best tennis today and I was really disappointed but Sloane was very supportive and if there was someone I had to lose to today I’m glad it’s her.”

The friendship could also develop into a great rivalry as both women showed throughout the tournament, and before that, that they could be competing for majors for a while.

“In America, women’s tennis needs to be really high level because it has always been and they need to be filling up the void after the Williams sisters,” former world number one Mats Wilander told Reuters.

Venus Williams, 37, was one of four Americans in the semi-finals but her sister Serena did not take part in the tournament because of the birth of her first child.

In the first all-American U.S. Open women’s final since Serena beat Venus in 2002, Stephens made only six unforced errors to frustrate Keys.

It was a remarkable turnaround for Stephens, who six weeks ago was still ranked 957th by the WTA.

She sealed a straightforward win on her third match point when Keys sent yet another forehand into the net.

Stephens welcomed the biggest victory of her career with a low-key smile, going into the Arthur Ashe Stadium stands to hug her coach, Kamau Murray, before embracing her mother.

Stephens, who will pocket a record $3.7 million cheque, underwent foot surgery in late January and made her competitive comeback at Wimbledon.

Saying earlier she was simply happy to be running around on courts, Stephens did a lot of running on Saturday to deny the 22-year-old Keys in what turned out to be a one-sided contest.

Stephens played her usual defensive tennis, forcing her opponent to make the extra shot and testing her patience.

She was rewarded with two break points in the fifth game of the first set, converting the first one when Keys again failed to wait for the right moment to accelerate and fired a forehand long.

Stephens held comfortably and bagged the set on her second occasion, Keys hitting a backhand long, her 17th unforced error — compared to Stephens’s only two.

Keys showed signs of frustration as she felt the game was slipping away.

Stephens moved to 40-0 up on Keys’s serve in the following game with a perfect backhand passing shot.

Another ill-timed rush to the net, though, cost Keys a break, Stephens punishing her with a delightful dipping forehand passing shot.

Keys fell 4-0 down when she hit a double fault and although she had her first break points of the match in the fifth game, Stephens held.

Keys hit the ball harder and harder but it would always come back and she needed a 19-shot rally to save her second match point. On the third, she hit her 30th unforced error of the day.