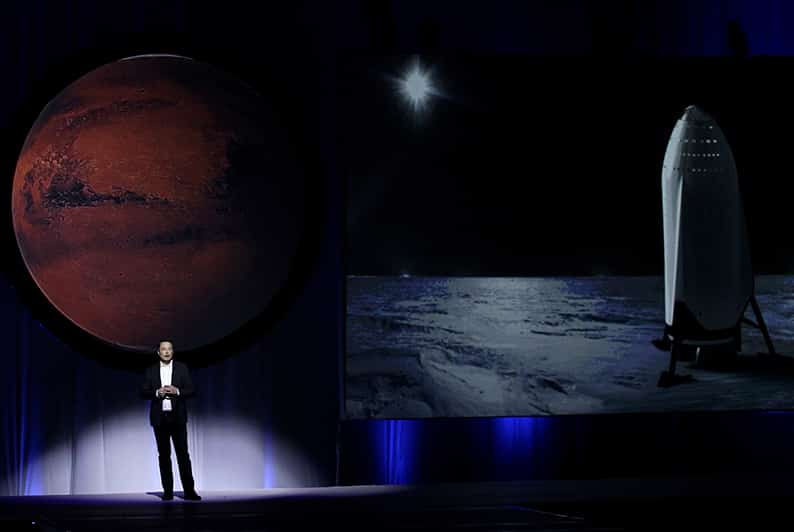 Some other contender for the title of Curmudgeon of the Year may emerge before the end of December, but at the moment it looks like Mark McCaughrean, senior adviser for science and exploration at the European Space Agency, will win in a walk. When Elon Musk unveiled some details of his plan to create a large human settlement on Mars in the journal New Space in June, McCaughrean tweeted as follows.

“It’s a wild-eyed investment pitch, pumped up by the enthusiasm of fanboys brought up on comic-book sci-fi, wrapped in evangelism of saving humanity from itself and the problems we’ve brought on this planet, a kind of modern-day manifest destiny,” he said, waving his stick angrily in the air. (I made that last bit up.)

“I’m less concerned about making humans a multi-planetary species than I am about making the Earth a sustainable multi-species planet, before we go gadding off colonising the solar system,” he continued.

Harrumph. Science journalists always have the phone numbers of grumps like this, because every science story has to have a quote from somebody saying that it’s a bad idea – but it does sound like McCaughrean is in the wrong job.

I’m writing this now, although McCaughrean’s rant happened almost two months ago, because I’m currently on Baffin Island, just about the least hospitable place on Earth that has sustained a long-term human presence.

The ancestors of the present Inuit inhabitants arrived here a thousand years ago without even metal tools, and it occurs to me that if they could make a go of it here, then people with currently available technologies can probably make a go of settling Mars.

The red planet gets much colder than Baffin, its air is not breathable, the water is frozen in the soil, and the lack of a magnetic field lets hard radiation get through to the surface during solar storms, but a human colony on Mars is not impossible.

It may never be the million-strong settlement that Musk imagines a century from now, but he never said he was going to build that himself. What he is building is an Interplanetary Transport System (ITS) that would get people there for as little as $200,000 each. Then just stand back and watch as people with ideas about what could be done on Mars put their money down.

Musk is already building and testing elements of the ITS. He has a brilliant record as a high-tech entrepreneur (the Tesla electric car and the existing generation of Space-X launch vehicles). He has already successfully landed booster rockets, which is the key to making the system reusable. And this is his life’s work.

Jeff Bezos’s Blue Origin launch vehicles are also landing successfully, so the reusability problem is cracked – which will automatically cut launch costs at least tenfold. And other blue-sky space projects are practically tripping over each other as the ideas multiply.

Russian tech billionaire Yuri Milner’s ten-year Breakthrough Listen project is buying thousands of hours of time on the world’s most powerful radio telescopes for researchers seeking signs of civilisations elsewhere in the galaxy. There is “no bigger question in science”, said Professor Stephen Hawking, who is an adviser to the project.

The 100-Year Starship project, funded partly by Nasa, was founded in 2012 to explore the technologies needed to make interstellar space travel a reality a century from now. It is now joined by Icarus Interstellar, whose Project Persephone is working on the design of a ‘generation ship’ that could serve as an interstellar lifeboat for some tiny portion of the human race if the Earth faced disaster in the next century.

Then there is the StarShot project, also backed by Yuri Milner. It’s a five-year, $100 million research programme to design a system of tiny probes consisting of single chips, no bigger than a postage stamp, that would fly to nearby star systems to do close-up observations as they sweep through.

Weighing only one gram, the SpaceChips would be put into orbit, then sent on their way by an array of ground-based lasers focussed on a small light-sail: only a few square metres. The lasers would blast them up to one-fifth of light speed in a few minutes, and then they cruise for twenty years or so until they reach their destination – in the first instance, Proxima Centauri, the nearest star

You couldn’t choose a better target, because astronomers have found an Earth-sized planet circling Proxima that is within that star’s “habitable zone” (where water remains liquid). “We will photograph it close-up,” said Avi Loeb, chair of the advisory committee. “Will it be blue from its oceans, or green from its vegetation, or yellow from its deserts? We will find out.” Get the technology right, and you could do it with thousands of stars.

Like all of these projects, StarShot will require the solution of dozens of difficult technical problems, cost a small fortune, and take years, decades or a lifetime. But it is exhilarating to know that all these projects are underway. At last, the ambitions of the innovators and the explorers begin to match the scale of the task.

Is a church without a cross any less a church?

The dangers of an independent Iraqi Kurdistan