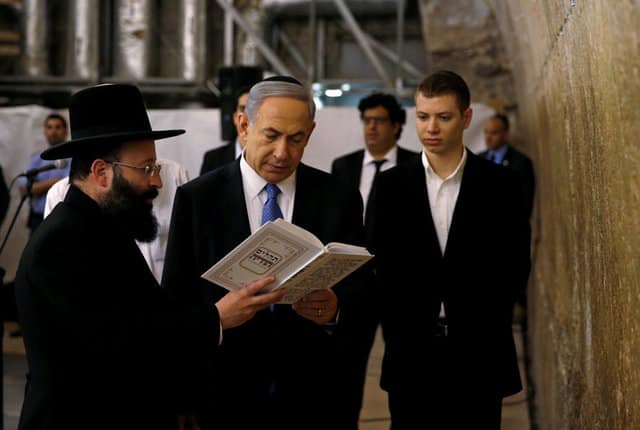 From an argument over dog poo to an alleged anti-Semitic caricature he posted on Facebook, Yair Netanyahu, the Israeli prime minister’s 26-year-old son, is courting controversy with his social media activity.

The criticism of Netanyahu in Israel is turning into a sideshow to more weighty events: criminal investigations into corruption allegations against his father and mother.

They both deny any wrongdoing.

The young Netanyahu is widely seen in Israel as being groomed by his parents as a future political leader and the Facebook posts have attracted particular public interest.

On Saturday, he posted a cartoon using what the Anti-Defamation League, which monitors anti-Semitism worldwide, described as anti-Semitic imagery in a Facebook post mocking some of his father’s critics.

It included a depiction of U.S. billionaire George Soros at the top of a food chain, dangling the world in front of both a reptile and former prime minister Ehud Barak, a frequent critic of Netanyahu.

Jewish financiers controlling the world is a well-known anti-Semitic theme. Soros supports left-wing and human rights organisations that have been highly critical of Israel and its treatment of Palestinians.

The Israel office of the Anti-Defamation League denounced the cartoon on Twitter, writing: “The caricature posted by Yair Netanyahu includes explicit anti-Semitic elements. One cannot belittle the danger inherent in an anti-Semitic discourse.”

In further Facebook posts following criticism for posting the cartoon, Yair Netanyahu, who is a university student, condemned the Israeli left for being two-faced in trying to silence him.

A family spokesman said Yair Netanyahu would not be making any other comment. The prime minister refused to ask questions from reporters about the post on Sunday morning at the start of his weekly cabinet meeting.

Last month, the son made another headline-grabbing post after a protester was killed during a white nationalist rally in the U.S. state of Virginia.

It appeared to suggest that hard-left organisations now pose more of a danger than neo-Nazi groups, which he wrote are a dying breed.

In July, Netanyahu junior found himself in a bizarre social media row over dog poo.

A neighbour of the family said on Facebook that Yair, who lives with his parents, responded with an obscene gesture and walked away after she had asked him to clean up the mess left by the dog he was walking in a park.

The post went viral. A family spokesman said at the time that the woman had behaved aggressively and “Yair does not know if Kaiya (the dog) did defecate as (she) alleges”.

Some critics in Israel suggested Netanyahu’s online activities were meant to deflect attention from his parent’s legal troubles.

On Friday, Israel’s attorney-general said he was considering indicting Sara Netanyahu on suspicion of using state funds for personal dining and catering services amounting to some $100,000.

Benjamin Netanyahu, who has served as prime minister for 11 years, spread over four terms, is being investigated by police in two corruption cases.