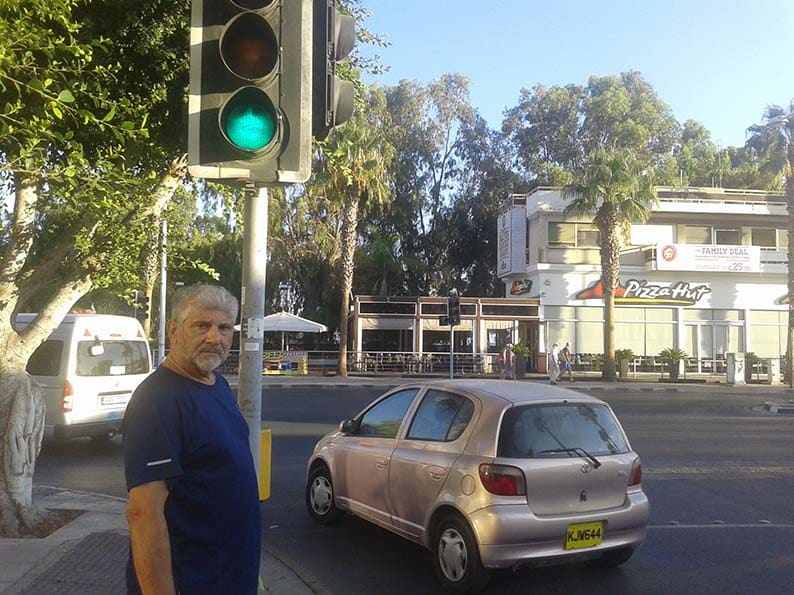 Robert Michael at the traffic lights where he made a right turn towards Pizza Hut. He says police should not get away with this kind of behaviour

THE police have adamantly denied accusations from the public that drivers are being fined for offences they did not commit for the sake of meeting internal quotas, especially when conducting high-profile road safety campaigns.

In the space of one week last month, the Sunday Mail received complaints from several readers claiming they had been wrongly fined for traffic offences.

Two different men were fined in Germasogia, Limassol at two traffic lights close to each other for running a red light – charges they both deny.

One of them, Robert Michael, a 70-year-old retired British policeman who had worked in London, said he was absolutely perplexed by the fact he was fined when the light was very much green when he passed it.

“I braked as I approached the traffic lights just in case they would go amber but they were still green. I continued to drive on and a policeman pulled me over to say I had passed with a red light,” he told the Sunday Mail.

“I’m an ex policeman from London. I don’t break the law. If it was justified I certainly wouldn’t dispute it.”

Michael said he began disputing the case with the police officer on scene and when Michael told him he was willing to take the case to court, the officer allegedly responded with “you can try but we always win.”

Cases such as these are always very difficult to prove or dispute.

Unlike London, which is covered with cameras and CCTV, in Cyprus a court case would be the word of one man against that of an officer.

“In the UK I would have a shot at justice but not in this country,” Fields said.

“I had children in the car, so of course I was driving carefully.”

On the same day, a friend of Fields, Egis Rukviza also got stopped at a nearby set of traffic lights in Germasogia for what he was told at the scene was running a red light.

Rukviza has been living in Cyprus with his wife Neringa for the past seven years after they moved from Lithuania and says in all his time here he had never once been fined.

Due to Rukviza’s broken English, his wife spoke on his behalf to the Sunday Mail “my husband stopped at the traffic lights because it was red and there was another car in front of him. Then it became green and they drove on. Police didn’t stop the first car. It was an expensive one, so they didn’t bother, but they stopped my husband.

“I know my husband, he drives very carefully,” Neringa said.

According to their account, once pulled over, the police officer called on a colleague of his – who was sitting in the car – to write up the fine.

“He didn’t even see what happened. My husband kept insisting it was green,” she said.

Later that evening, the couple went to the police station to complain and ask for proof of the offence – they were told there were no CCTV cameras.

Police spokesman Andreas Angelides said the difficulty with such complaints is that there is hardly ever any evidence – unlike those that are caught speeding with the use of a radar – and it was the word of one person against another.

“We also have to keep in mind that the person being fined might be overreacting,” and perhaps falsely denying the charge, Angelides told the Sunday Mail.

Police’s campaigns are aimed to clamp down on bad drivers not an attempt to give out tickets left, right and centre, he added.

On August 29, in a one-day campaign, 259 people were booked in Limassol alone between 8am to 5pm.

Of those, 78 were booked running a red light while 82 were caught using a mobile phone while driving.

“I don’t mind these campaigns. I think they’re great. But you can’t fine innocent people as a source of income,” Michael said.

There are three courses of action available for people to follow when they feel they have been wronged – send a letter to the chief of police, take the case to court, or speak to the local traffic police supervisor.

If there is a case of bad police behaviour, then the public can also file a report to the independent authority for the investigation of allegations and complaints against the police.

Michael and Rukviza however tried – and were rebuffed twice – when they tried to speak to Limassol traffic police, they said.

After they discovered they had both been fined, they headed to the Germasogia police station asking to speak to the traffic supervisor. They were advised to go the next day.

The following day however the supervisor was apparently still unavailable to meet them and sent out the police officer that fined Rukviza.

Upon closer inspection Rukviza also realised that although his supposed offence was running a red light, the ticket said he had been driving while on his phone – an offence he also denies.

“The officer, when he came out to meet my husband and Mr Robert (Michael) at the station, then insisted they had driven past a red light,” Neringa said.

“So they asked him why the ticket was for driving while using a mobile phone and he said ‘you committed both but I fined you only for one’.”

Rukviza was considering filing a report over the police officer but said “they all work together. I don’t think a complaint would even make it to the policeman’s file. I doubt they even have a file.”

Angelides told the Sunday Mail that under no circumstances do police have quotas of fines that have to be filled.

“On the contrary, officers are told that if they’re not sure about an offence – say someone was caught for speeding but they weren’t sure if the person was wearing a seatbelt – then to ignore the seatbelt offence,” he said.

“Over the years, the behaviour of the police force has improved as well and the way they respond to the public. Many times the officers are on the receiving end of abuse from people that are upset about being fined who start shouting and swearing.”

All of which is no doubt true, but is of little solace to Michael and Rukviza. Both men paid their €85 fines, but feel it is unjust, as they insist they didn’t commit the offences.