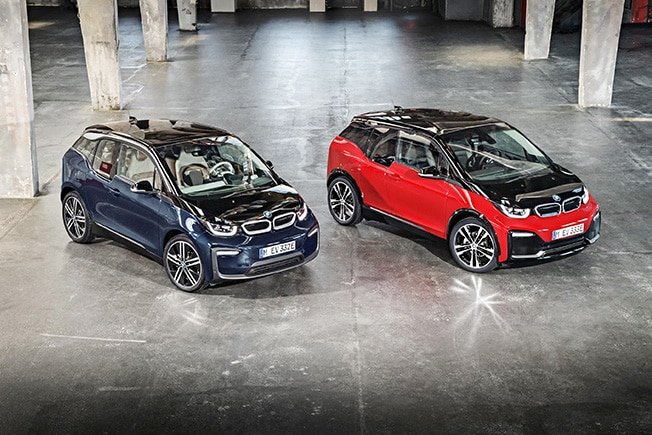 The Frankfurt Motor Show (IAA) kicks off this week and as usual many car makers have waited to unveil their latest offerings in Germany.

Renault showcases the SYMBIOZ, an innovative concept that describes the French manufacturer’s vision of mobility by the year 2030. It addresses “customer expectations in the future related to mobility and lifestyle” as well as the environmental and urban challenges that lie ahead. It is also a way for Renault to explore autonomous, electric, connected mobility in the future.

The name SYMBIOZ is derived from ‘symbiosis’, the Ancient Greek word for ‘living together’. Renault believes that the automobile of the future will function harmoniously and in permanent interaction with its environment, road network infrastructure and the digital lifestyles of its occupants. The letter ‘Z’ at the end refers to the all-electric Z.E. technology that powers the car.

It’s the first time the all-new CR-V has been shown at a European motor show and although it retains the familiar silhouette it is wider, taller and longer than the previous version, with fresh exterior styling, and a wider stance thanks to the broader, muscular wheel arches.

There are sharper contours on the bonnet and rear quarters, and the nose incorporates the latest Honda family ‘face’ with its signature headlight graphic.

The two-motor i-MMD (Intelligent Multi-Mode Drive) system in the CR-V Hybrid Prototype comprises an electric propulsion motor, a 2.0-litre i-VTEC four-cylinder Atkinson cycle petrol engine for electrical energy generation and propulsion, and a separate electric generator motor. The hybrid system does not need a conventional transmission, and is fitted instead with a single fixed-gear ratio that creates a direct connection between moving components, “enabling a smooth transfer of torque within the system”.

The i-MMD system determines how to use fuel and electrical energy in the most efficient way, meaning there is no need for the driver to adjust between the three driving modes; EV Drive, Hybrid Drive and Engine Drive.

Kia has announced details of the all-new crossover-inspired Picanto X-Line which will make its debut at Frankfurt: this version of Kia’s smallest car has raised ground clearance (to 156mm, 15mm higher than the standard Picanto) which gives the driver a clearer view of the road ahead.

Meanwhile, Citroen is rolling out its SUV offensive at Frankfurt, with the World Premiere of the new C3 Aircross compact SUV billed as “a new-generation SUV with a personality all of its own, featuring the space and modularity of a people carrier, with an emphasis on comfort and connected technologies”.

The 4.15m long SUV features raised ground clearance, a high-set driving position, front and rear skid plates, large wheels and wheel arch extensions. The body styling is underscored by graphic features like touches of colour on the roof bars and the ‘Venetian blind’ rear quarter-lights. Nimble in the city, Citroen says the car is “ready for adventure thanks to Grip Control® with Hill Descent Assist” and is available with a choice of ‘frugal and efficient’ petrol and diesel engines.

BMW is firing the starting gun on the brand’s forthcoming product offensive with a pageant of new models and concept vehicles at the IAA. Both the Concept 8 Series and the 7 Series Edition 40 Jahre are testimony to BMW’s expanded presence in the luxury segment.

Other facets of driving pleasure are demonstrated at the Frankfurt show by the Concept Z4, the new 6 Series Gran Turismo and the new X3. The know-how gleaned from competing in motor sport is a traditional component of the BMW brand’s DNA, and it endows the new BMW M8 GTE with ideal credentials for endurance racing.

And it’s curtain up for the new Skoda Karoq as the Czech brand presents its new compact SUV at the IAA. Featuring a first for Skoda – a digital instrument panel – the car also comes fully networked with LTE module and Skoda Connect.

The long wheelbase (2,638 mm) ensures plenty of room for passengers. The boot has a volume of 521 litres, increasing to 1,630 litres with the rear seats folded forward.

Skoda have incorporated several of their ‘Simply Clever’ ideas into the new compact SUV including a ‘virtual pedal’, which opens the boot hands-free and optional VarioFlex back seats which make the storage space flexible, able to hold between 479 and 588 litres.

The VarioFlex system consists of three separate rear seats that can be individually adjusted or completely removed – the compact SUV is then converted into a van with a maximum load volume of 1,810 litres. Five engine variants are available, including two petrol engines and three diesel engines.

Coffeeshop: Of mice and men: the best plans for financial cover-ups

Tziortzis and ALCO Filters together for fourth year

Tziortzis given ‘Unicars Motorsport Award’ for 2022