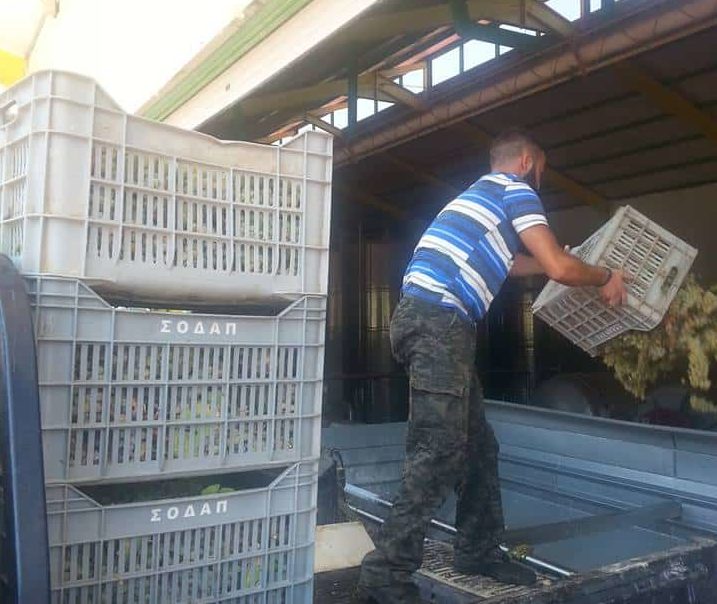 GRAPE growers in Paphos are protesting over the prices being offered for their Xynisteri grapes by the island’s largest winery after this year’s bumper crop of the white wine variety.

Annual grape collection at Sodap’s Kamanterena winery in Stroumbi got underway on Monday and will last a month, but producers are unhappy that Sodap has decided to reduce the price of Xynisteri this year from 390 euros per tonne to 300 euros.

Thirty-three per cent of grapes collected in Cyprus go to Sodap.

The problem has arisen after a glut of the white grape, following the lifting of a partial ban on the indigenous fruit. Previously, Xynisteri was only grown in limited, designated areas.

Andreas Ioannides and his family have been growing the Xynisteri variety in Polemi village for years and usually take their produce to Sodap. He told the Sunday Mail that along with other growers, he is concerned about the huge drop in prices.

“Last year the price was much better and I had 10,000 kilos, this year I have 12,000, I have already contacted a Limassol winery to see if they may be interested in my grapes, but it would be much better if Sodap took them and at last year’s price,” he said.

He said that this year there had been a bumper crop of Xynisteri in the area.

Ioannides will harvest his grapes on September 28, calling in extra manpower to pick and load the grapes onto trucks and will then try to unload them at Sodap winery first.

A Sodap employee, who wished to remain unnamed, told the Sunday Mail that the fault lies both with the government and the growers themselves.

“There is no coordination, no discussion with the wineries to ask what grapes are needed, or to ask themselves when they are planting, how and where they will sell their produce,” he said.

He explained that as the variety is reasonably easy to grow and is a high producer, especially if well irrigated, many growers ditched previous varieties, such as Chardonnay and instead planted Xynisteri. This has led to a huge amount being produced this year.

A grower can expect to collect 500 kilos of Chardonnay grapes per hectare per year, while Xynisteri can yield up to 3,000 kilos per hectare.

“Our needs at Sodap this year are around 1.2 million kilos of this grape, but around 2.2 million are being grown,” the Sodap representative said. “The small wineries don’t want many of them, as there is an abundance and so the growers are coming to us, as we are a co-operative. They are demanding that we buy their produce but at a higher price which suits them, but not what we are offering, or what is feasible.”

In previous years, he said, the government, pre-election time, pressured Sodap to buy surplus grapes. However, he said that such moves are counterproductive and could spell the end for the industry as wineries would face extortionate debts and even be forced out of business.

“It’s an election tactic in my opinion, but this got us into a huge amount of debt in the past, millions of euros, as we had to borrow this money as loans from the state.”

Following the sale of the company’s Limassol winery, Sodap no longer has any debts, and does not want to make the same mistakes again. Nor does it want to force up the price of their products.

Another issue, according to Sodap’s chief winemaker/oenologist, Stephanos Stephanou, is that Xynisteri has to be drunk fresh and young. Within the first year after the grapes have been collected, the wine has very good acidity and aromas, which disappear after this time frame, and that it’s not feasible to use the grapes later on.

“Generally, it has been a very productive year for Cyprus grapes overall, they have ripened well, with the exception of around five per cent of Mavro which has been spoiled.”

No final decision has been taken about the excess grapes.

“We will only be able to use this extra for box/carton wine and we will have to export it. However, nothing is agreed yet,” he said.