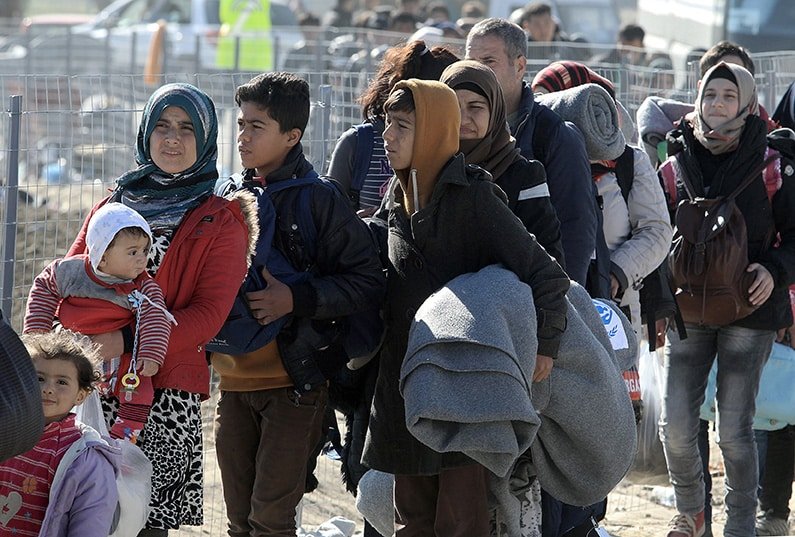 Refugees on the Greek Macedonia border in 2015

In an insightful piece in last week’s Sunday Mail, under the rubric ‘when people move they become the playthings of semantics,’ Gavin Jones condemned the newspeak that damns refugees fleeing persecution.

It is a sad reflection of our times that the civilised values of the post war generation that gave us the European Human Rights Convention and the 1951 Refugee Convention has now given way to the values of a spoilt brave new world of robots with no heart and bigots with no brains – a world I detest.

Terms such as asylum seeker and economic migrant, while innocuous in themselves, do not do justice to the desperate predicament refugees find themselves in at the moment they are forced to leave home, community and country. Refugees across the whole of Cyprus know exactly what it feels like to be forced to flee in fear of persecution.

There is of course a difference in international law between refugees outside their country entitled to international protection and refugees who, although no less deserving, are not outside their country. The essence of being a refugee, however, is the idea of fleeing your home owing to fear of persecution because of your origin, religion or your politics. The Greek word prosfigas is closer to the concept of fleeing than the word refugee since refugees flee first and seek refuge afterwards.

What makes them refugees is their predicament at the moment they feel impelled to flee. They become refugees the moment they fulfil the criterion of fleeing owing to a well-founded fear of persecution, not when they are accepted as refugees in the country of refuge. In other words being a refugee is a question of status in which individuals find themselves out of necessity not choice.

Many countries made inroads into this liberal principle as I discovered when as a young barrister I was instructed to obtain an injunction in the middle of the night in a case in which some Tamil refugees were to be removed the following morning to Sri Lanka, a country they had fled in fear of their lives.

In those days you had to go to the duty judge’s home to obtain an injunction during out-of-court hours, so off I went to the judge’s residence in London’s fashionable Belgravia. The judge greeted me in his dressing gown, whisky glass in hand. After I explained the basis of my case, he agreed to grant the injunction ‘to hold the fort for 48 hours to enable the court to consider in the cold light of day if you have the glimmerings of an argument’ he boomed in his whisky voice. He then asked me to draft the order and left me in his study with his two dogs. All I had to do was write the magic words that the Home Secretary, his servants and agents were not to remove the refugees from the UK – and be nice to the dogs.

And so began a legal battle that was to end in front of the judicial committee of the House of Lords – now the Supreme Court of the United Kingdom. The Court of Appeal, normally the final appeal court, bought the argument without dissent. Lord Donaldson, Master of the Rolls – head of the civil division of the court of appeal – found no difficulty in accepting that refugees had to be judged at the moment they flee in fear provided their fear is not irrational.

Unfortunately the judicial committee disagreed. It decided that the test was reasonable likelihood of persecution in the country of feared persecution, which shifted the inquiry away from the desperate plight of refugees as they flee to what may happen to them if returned, which is more relevant to ceasing to be a refugee. This test has led states to delay decisions for many years to see how the situation in the country of feared persecution develops and indirectly to the birth of the term asylum seeker.

Asylum seeker is an inchoate term borne of procrastination and delay in the processing of refugees that got a bit of fillip as a category when the EU devised a system for allocating responsibility for examining refugee claims between member states. A refugee is fleeing persecution not seeking asylum.

The crucial question in all refugee cases is whether the refugee is in need of international protection owing to a well-founded fear of persecution in his own country.

Often this requires decision makers to consider the effectiveness of the laws and of law enforcement agencies in other countries that, for example, do not protect gay people from their tormentors. In cases where the persecution is by the state of minorities or political persons, the question is if the refugee is a member of the persecuted minority or holds political opinions not tolerated by the state in his country.

Sometimes, human nature being what it is, there are refugee claims that are bogus. The abuse of refugee law by bogus claimants seeking a better life is a fact of life like the abuse of marriage and the welfare state. In refugee cases the claim to be a refugee automatically means the claim has to be examined and this tempts abuse of the system of refugee protection. Overall the problem of bogus refugees is not as great as the right-wing press makes out by branding refugees as economic migrants.

Some countries manage to cope even with huge influxes of refugees while others dither and a few show appalling lack of compassion. Turkey took in three million Syrians without much fuss and Germany took in a million because she could. Italy and Greece have become vast transit camps but seem to be managing okay, and everyone else is passing the buck – some more than others. I would single out Hungary, Slovakia and Poland as particularly egregious. The first two have just been condemned by the Court of Justice of the EU for refusing to help ease the refugee crisis in Greece and Italy. These countries are incredibly racist and anti-Semitic and one wonders how on earth they were allowed to join the EU, a club that is dead against racism and all forms of discrimination.

The position regarding the return of refugees to countries they fled is governed by the cessation clauses of the 1951 convention. Basically a person ceases to be a refugee if the circumstances that led him to flee cease to exist, unless he can show compelling reasons for not ceasing to be a refugee on account of the nature of the persecution he suffered.

Both can show compelling reasons based on the nature of the persecution previously suffered why they still fear and distrust the other community.

How to make this viscous circle virtuous is beyond the current political class.